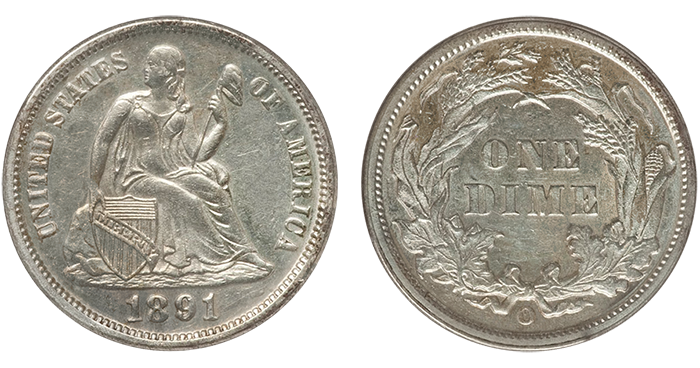 The Liberty Seated dime series was produced from 1837 to 1891, making it the second-longest-running series of the denomination after the Roosevelt dime. A series that is filled with rarities and very scarce coins, it also has many dates that are quite affordable, especially in circulated condition. While completion of the series is a goal attained by very few, building a nice type or mintmark set of the Liberty Seated dime design is within reach of many collectors. In this article we will take a look at five issues that can be found at a cost of less than $100 each, making such coins a great introduction to the series.

As with the half dime of the same design, the first year of issue of the Liberty Seated dime did not have obverse stars. The following year, 13 stars were added to the obverse. At first glance the 1838–1840 issues appear similar to those of the 1840s and 1850s, but careful observers will notice the lack of drapery near Liberty’s left elbow on most coins dated 1838, 1839, and 1840. This drapery of her dress was a minor addition to the design that was added during 1840 along with several other design modifications. The No Drapery coin is considered a separate type for advanced collectors, but all dates are relatively easily found. For the 1838, the second year of issue of the type, collectors should expect to find a nice Very Fine / Extremely Fine for right around $100.

Spend a little more: Of the various dates of the No Drapery design, the 1840-O is the scarcest. While coins grading Fine and below can usually be found for around $100, a nice VF+ can be found for around $200, and makes for an excellent buy. This date, at that grade level, is surprisingly scarce and becomes even more difficult to find in grades EF and above.

Even though $100 buys you only a Good or maybe a Very Good of the 1860-S, I’ve still decided to include it in this list. It is the first dime struck at the San Francisco Mint that even comes close to our budget, and with a mintage of just 140,000 coins it is anything but common. It is also the last of the Obverse Stars type to be struck at the San Francisco Mint, as the following year saw the introduction of a new design. In fact, the two other mints at the time, Philadelphia and San Francisco, had already switched to the new Legend Obverse design in 1860, but San Francisco had to wait a year, making for an interesting and very scarce coin.

Spend a little more: Even VF’s of this issue sell in the mid-hundreds, and above that this issue becomes a condition rarity. With some searching you might be able to find a decent and original Fine for about $250, but even at that grade level this issue is not easily found.

During 1873 the weight of the dime was increased slightly, and arrows were added next to the date to denote the change. This had also happened in 1853 when the older type was still being struck. The 1873, No Arrows is surprisingly affordable, despite the fact that no doubt many were melted in later years to be recoined to the new standard. Two varieties of the No Arrows coins were struck, identified by either a “closed” or an “open” 3 in the date. The Closed 3 was struck first, but it was determined that the digit looked too much like an 8, and new obverse dies with a more open 3 were put into production. The 1873, No Arrows dime is quite scarce, and makes for an excellent buy. This is especially true if you are able to find a coin of the Open 3 variety, which had a mintage of just 60,000 pieces, compared to 1,508,000 coins of the Closed 3 variety. With some dedicated searching, $100 should get you a decent Fine or VF of the Open 3 variety.

Spend a little more: If you don’t care about the Open 3 and Closed 3 varieties you can for one of the more common 1873 Closed 3 coins. Much more readily available, a strong EF can be found for about $100, or a high-end, original, mid-level AU for about $200.

The Carson City Mint has something magical about it (to many coin collectors, that is). Located in the capital of Nevada, the mint struck gold and silver coins from 1870 to 1893, focusing mostly on Morgan silver dollars. Smaller denominations were also produced, however, and the smallest of these is the Liberty Seated dime. While several of the dates are major rarities, some are quite affordable, including the 1875-CC, which comes in two varieties. On one, the mintmark is found below the wreath on the reverse (as was typical at the time), while on the other the mintmark is inside the wreath. Both are about equal in scarcity, giving you a nice VF/EF for about $100, but in our opinion the variety with mintmark inside the wreath is more interesting, as the mintmark appeared inside the wreath on only a few dates in the series.

Spend a little more: It’s not that difficult to acquire both varieties of this year, as they are about equal in scarcity and sell roughly for the same price, making for a good comparison pair. Alternatively, you can try to upgrade this issue, with strong EF’s or even AU’s being generally available without breaking the bank. For a decent, certified AU-50 of either variety expect to pay about $250.

The New Orleans Mint opened in 1838 and struck coins until shortly after the outbreak of the American Civil War, when the mint closed. It reopened in 1879, but it would take until the final year of the Liberty Seated design for dimes to be struck again at the facility. The 1891-O thus is the only Legend Obverse Seated dime that comes with the O mintmark. A total of 4,540,000 coins were struck for circulation, and while the date is scarce in Choice Uncirculated or better, lower-grade coins are more affordable. A very strong EF or lower-end AU can be had for $100. As always, make sure you purchase an original coin with a strong strike, and you will buy yourself an appealing and historic memento to this famous Southern mint.

Spend a little more: AU-58’s often offer a lot of coin for the money, with just a little rub often being all that keeps a coin out of a Choice Uncirculated holder. While they are not easy to find, this date makes for an excellent purchase in that grade, and should cost about $200, if you can find it.   ❑

Whitman releases new Search & Save™ coin books on dimes, quarters, and half dollars