The Capped Bust series was the main design on United States silver coinage from 1807 to 1839, with half dollars being struck for the entire period, and half dimes, dimes, and quarters being struck for shorter periods during that same timeframe. Designed by John Reich, the design of these silver coins has a classic feel to them, and the various denominations have a dedicated collector following. If you are a new collector, or are perhaps looking for a few type pieces to add to your collection, it is not necessary to spend huge amounts of money for some nice examples. In this article, we will take a look at five options that can be purchased for less than $100. While they may not be the finest known, they are still great examples of the coinage of America’s past, with some having already surpassed two centuries in age. 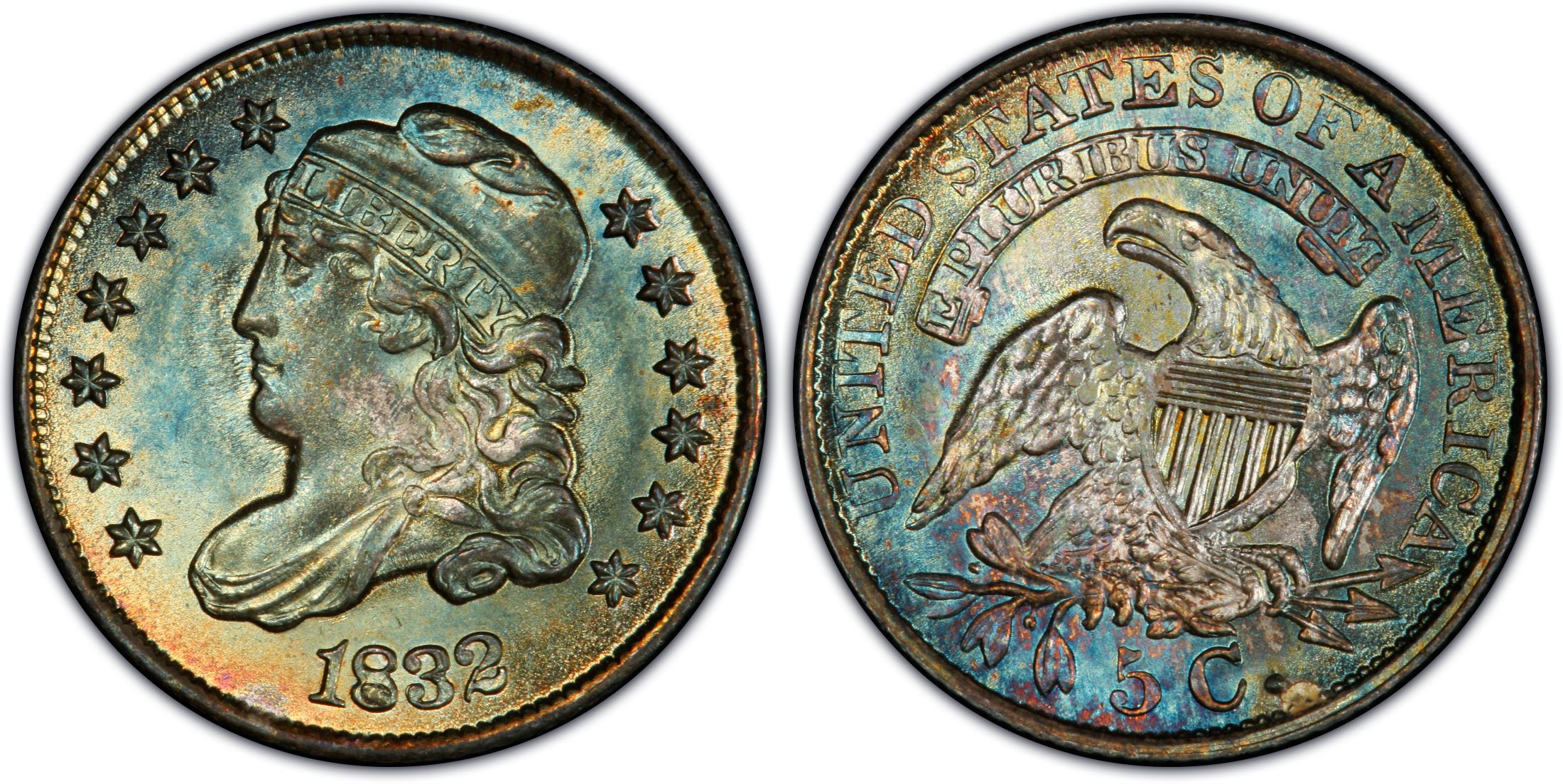 Capped Bust half dimes were only minted from 1829 to 1837, making them the most short-lived denomination with John Reich’s design. None of the individual dates in this series are rare or even scarce in circulated grades, making this a nice little series to complete by date for a reasonable cost. Even most of the major varieties are not very rare and can be found relatively easily. The 1832 date has the second lowest mintage of the series, after the 1837, with 965,000 pieces struck for circulation. This makes for a great type coin as it is slightly scarcer than the other dates, yet can be found with relative ease in most grades, and you should be able to find a problem-free VF for about $100.

Spend a little more: Value in this coin goes up with each grade, but a nice, problem-free EF can be found for about $200. Look for one that has minimal marks (not very difficult as these coins are small) and some luster in the protected fields (more difficult), and you’ve got yourself a great type coin. 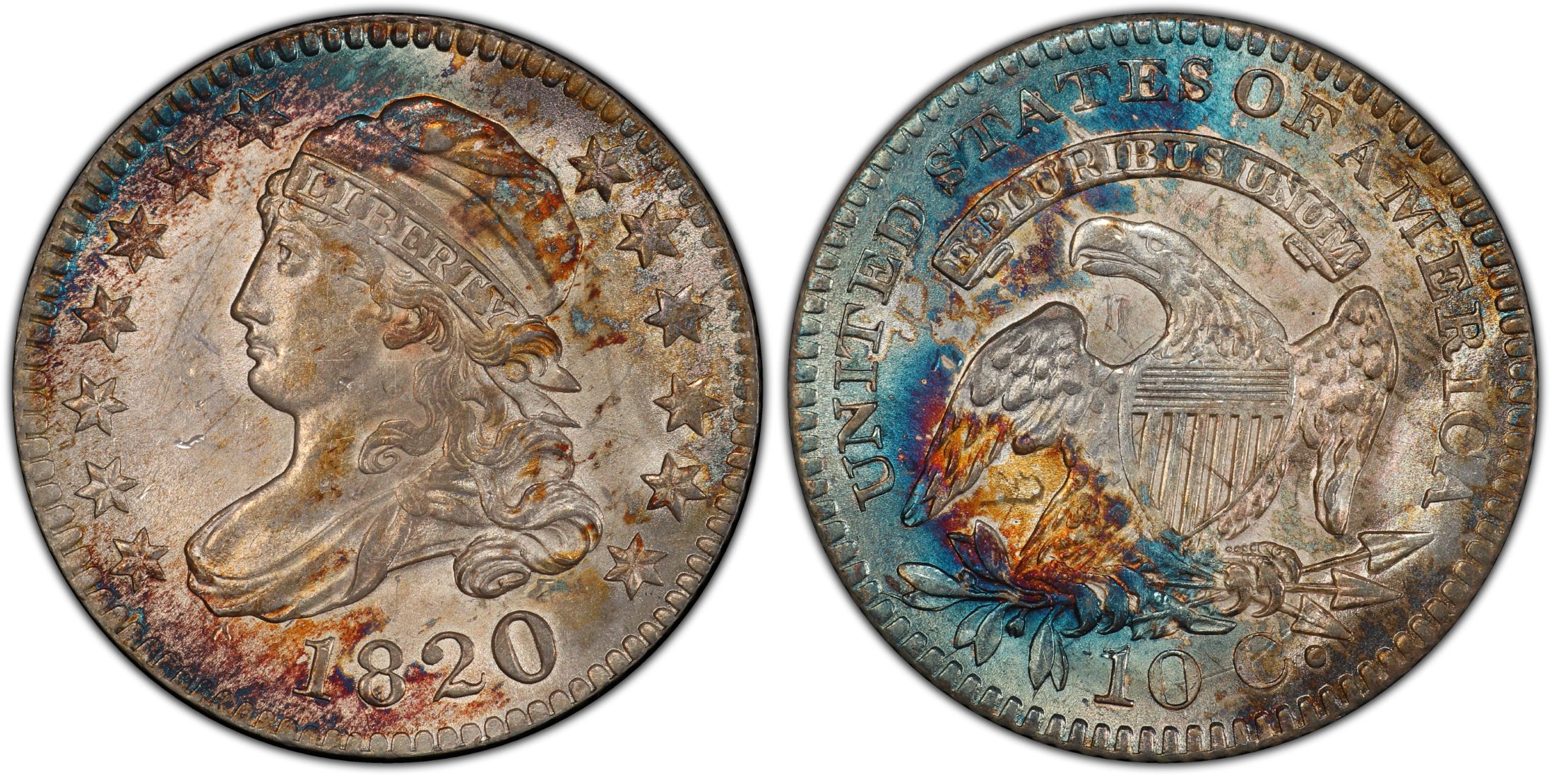 
Spend a little more: An interesting variety of the 1820 Capped Bust dime has the inscription “UNITED STATES OF AMERICA” much more closely spaced together, particularly “STATES OF AMERICA.” This variety, which is listed in the Red Book, is quite scarce but can still be found with relative ease and provides interesting insight into how each die was made by hand in the early United States Mint. Expect to pay around $200 for a Fine. A similar variety exists for the 1814, but is more difficult to find. Quarter dollars were struck irregularly at the early United States Mint. The denomination was not much needed in commerce, and silver depositors preferred half dollars, so during the first half-century of the United States Mint they were struck rather infrequently and in small numbers. Like the Capped Bust dime, these were struck as two major varieties, with the reduced diameter also having had the motto “E PLURIBUS UNUM” on the reverse removed from the design. Struck from 1831 to 1838, most dates are about equal in rarity and price. If you’re looking for a nice type coin we can recommend the 1835, as it has the third lowest mintage of the reduced diameter type at 286,000 pieces. A nice VG or low-end Fine can be found for about $100.

Spend a little more: The earlier type is much scarcer, but if you’re looking to add one to compare the two different types your best bet is probably the 1821, as it appears to be the most available. Expect to pay about $200 for a VG example and maybe a bit more if it is fully original and appealing. The Capped Bust half dollar was the workhorse for the American Mint during the first part of the 19th century. While circulation in everyday commerce was perhaps a bit limited due to its face value, mintages were large, as silver dollars were not struck between 1804 and 1840, making the half dollar the denomination of choice for depositors of silver at the Philadelphia Mint. Several subvarieties exist for the denomination, and this is a very popular series to collect. A nice type coin representative of the entire type can be found for several different dates, especially in the 1830s. Many interesting varieties exist as well. The 1823 date, which comes with several different varieties for the 3 in the date, would be a good candidate. You should be able to pick up a nice Fine or maybe even a VF for about $100.

Spend a little more: As mentioned, there are several interesting varieties for this date, identified by the shape of the 3 in the date. One of these is the so-called “ugly 3,” which was created after the 3 in the date was repaired in the die (the unaltered variety is called the “broken 3”, while another repaired variety is known as the “patched 3”). Quite scarce, a Fine would cost you about $250 or $300, but as it is listed in the Red Book and not easy to find, that is actually a very decent buy. 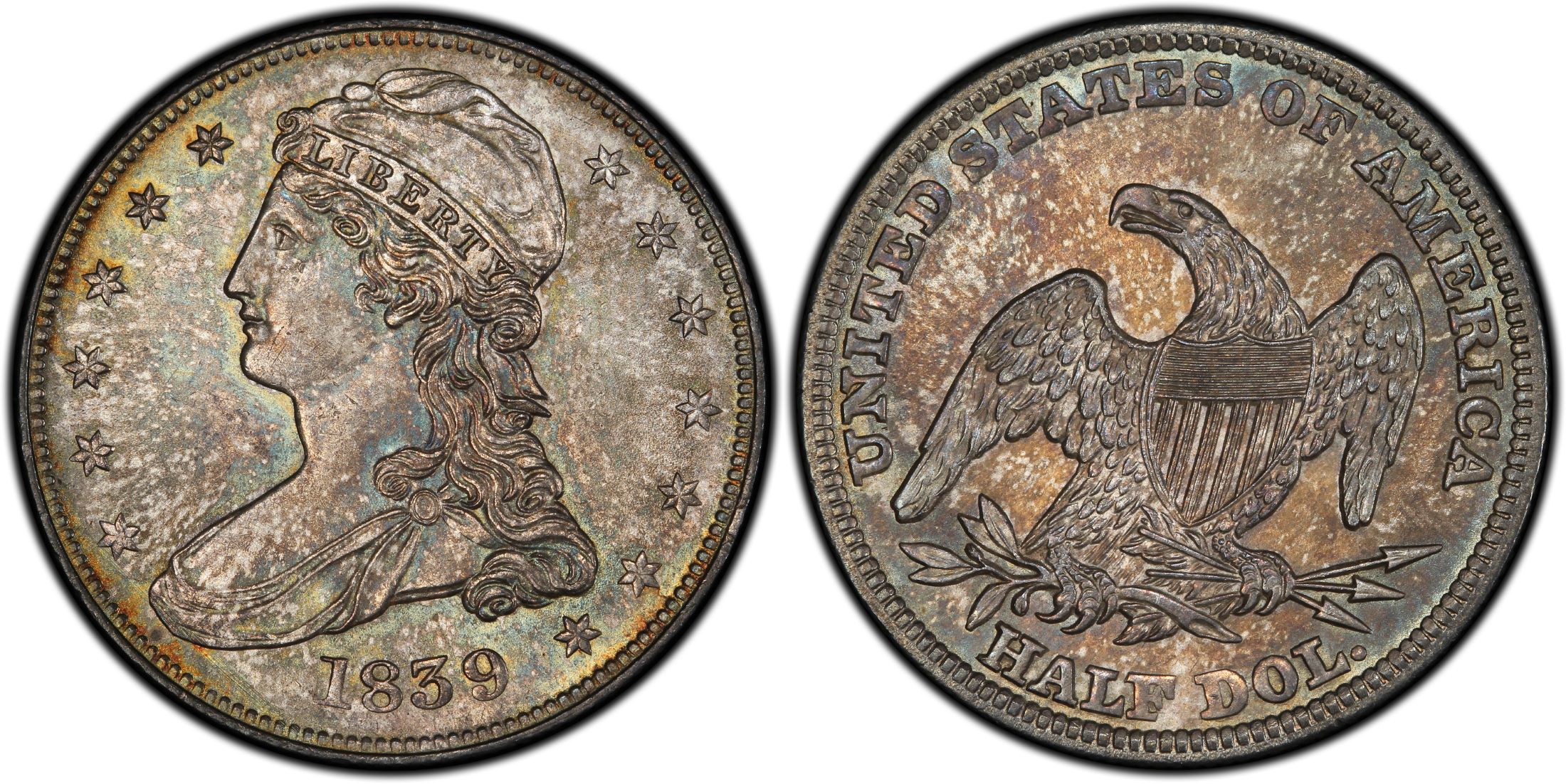 After half dollars had been struck with a lettered edge since the introduction of the denomination in 1794, in 1836 this was changed to a reeded edge. The first variety featured the denomination as “50 Cents,” but in 1838 this was changed to “HALF DOL.” This reverse die would remain the same when the Liberty Seated half dollar was introduced in 1839, but not before a relatively small number of Capped Bust half dollars were struck (1,392,976 total). A relatively scarce and popular type, this date can still be found with relative ease and sells for little to no premium over the 1838, which had a much higher mintage. For $100 and some searching, you should be able to find a VF.

Spend a little more: Instead of upgrading in quality, I would suggest adding the 1837 with “50 Cents” as the denomination in VF, which would not cost much more than $100 either. The pair compliments each other very well and provides valuable insight into the development of this denomination. Add an earlier Capped Bust half dollar and a Liberty Seated half dollar to your collection, and you will see the half dollar change from design to design right in front of you.