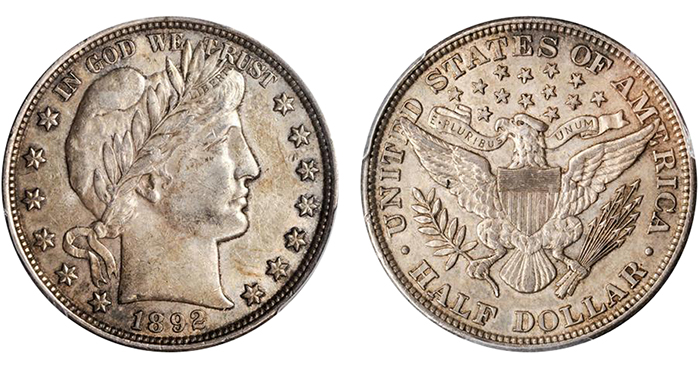 The Barber half dollar is the last in the trio of coins designed by Charles E. Barber to discuss in our “affordable coins” series. (Barber dimes were discussed here; Barber quarters, here.) Struck from 1892 to 1915, the largest denomination that utilized the design is also considered to be the easiest set to complete, as there are none of the rarities that are found in the two lower denominations, in particular the Barber quarter series. Yet, accurately graded Barber half dollars above Very Fine are considered very scarce and the series becomes rare in higher grades. In this article we take a look at some Barber half dollars that are available below $100, so within reach of many collectors on a budget, yet can be considered good buys and are worth seeking out if you’re interested in starting a collection of Barber half dollars.

In 1892 the Barber half dollar replaced the long-running Liberty Seated design. The first year of issue was struck in Philadelphia, New Orleans, and San Francisco. Of this trio the Philadelphia Mint is the only one that is easily available for a collector on a budget. For less than a $100 bill, you should be able to find a decent Fine, although finding a strong, original coin for that amount of money might take some time. The mintage of this issue was relatively low, with 934,000 pieces struck for circulation, but quite a few pieces of this issue appear to have been saved in various grades. This makes the coin, despite the relatively low mintage, an excellent issue to seek for a collector on a budget. (This coin is illustrated at the top of the page.)

Spend a Little More: As mentioned above, quite a few of this issue were saved, and it remains relatively available in all grades. Strong, original VF’s sell for less than $300, and even the occasional EF is available at that price.

The 1897-O Barber half dollar is considered to be among the scarcer pieces of this series. A total of 632,000 pieces were struck for circulation. VF’s are very difficult to locate, and they regularly and easily sell for $750 or more. Because of the scarcity of this issue, even in lower grades, a collector on a budget can really only hope to acquire a Good or maybe a Very Good for $100, but even at that grade level this is a coin to consider acquiring. Often when Barber half dollars wear down to the lowest grades they are all considered “common” and not worth collecting in the eyes of some, but there are some issues that are very scarce even in those grades, and this is one such issue.

Spend a Little More: 1907-O half dollars in Fine are very scarce and regularly sell for $300 or more, depending on eye appeal. An original coin at that level, although very difficult to find, might be a good purchase as more collectors start to collect this series at the F/VF level.

Most branch-mint issues of the Barber half dollar series are at least very scarce, and the 1906-S is no exception. $100 will purchase a Fine graded example with some searching, and provides a historic coin that I personally consider an excellent buy. 1906 was the year of the Great Earthquake in San Francisco, and even though that happened early in the year (April 18), there is always a chance that a 1906-S half dollar that you’re holding was there when it happened—and at the very least it was struck when the city was still recovering from the devastating events.

Spend a Little More: Like the 1892 discussed above, the 1906-S remains relatively affordable in circulated grades. A VF can be found for about $200 or so. Key to finding a good buy (and this goes for all Barber half dollars) is to look for a fully original coin, with original surfaces and no heavy marks. This sounds easier than it actually is, as problem-free VF and EF graded coins are very scarce.

Even though it is nowhere as difficult to find as the Barber quarter of the same date, the 1909-O Barber half dollar remains a very scarce coin. This was the last year of coin production at the New Orleans Mint, and a total of 925,400 coins were struck for circulation. This issue can be considered to be quite scarce in most grades, with the majority of examples in well-circulated grades. A fine can be purchased for about $100, but it won’t be all that easy to find, as it is a genuine scarce coin, even at that grade level.

1909-O Barber half dollar, EF details. (This example has been repaired.)

Spend a Little More: This is an issue that exponentially increases in value in grades above VF, with original, strong EF/AU coins approaching $500. A VF, depending on originality and eye appeal, will cost about $200, and because it is the last half dollar from the New Orleans Mint, such coins are quite popular with collectors.

The final three Barber half dollars from the Philadelphia Mint (1913, 1914, and 1915) are low-mintage issues that are among the scarcer coins of the series. The trio have the lowest mintages of the entire series, with the 1914 being the lowest of the three with just 124,000 coins struck for circulation. Yet, it remains surprisingly affordable, especially in lower grades. Even though $100 will only buy you a Good or perhaps a Very Good, it is certainly a scarce coin because of its low mintage, and in our opinion an excellent buy, as many other coins with similar mintages can sell for thousands of dollars even in low grades.

Spend a Little More: This is a coin that becomes difficult to find and expensive in VF or better, and EF’s can regularly sell for over $1,000. A Fine is sometimes available, but if it is, don’t expect to add it to your collection for less than $200, and at that price it is definitely not easy to find.   ❑
Share: