Coins featuring the likeness of Abraham Lincoln will be included in a wide variety of United States Mint products released during 2010. The First Lady Mary Todd Lincoln will also be featured on a coin and medal. This comes one year after the Lincoln’s Bicentennial year which was celebrated with the issuance of four different reverse designs for the 2009 Lincoln Cent and the 2009 Lincoln Commemorative Silver Dollar. 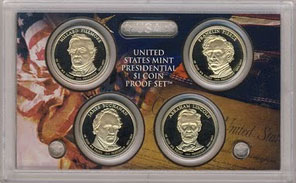 The Presidential Dollar series began in 2007 and has been featuring four different Presidents per year in the order served. As the sixteenth President of the United States, Lincoln is featured on the fourth coin released in 2010. The obverse of the coin features a portrait of Lincoln, with inscriptions of the order of the Presidency and the years served. The reverse of the coin features a rendition of the Statue of Liberty. 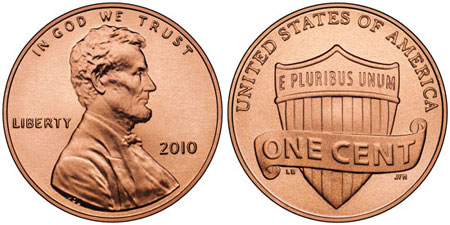 The next Lincoln-related US Mint product will be a Two Roll Set of the 2010 Lincoln One Cent coins. The product includes one 50-coin roll of cents from the Philadelphia Mint and one 50-coin roll of cents from the Denver Mint. The circulation strike coins are expected to be packaged in specially designed wrappers indicating the year, face value, and mint mark of the contents. The release date has not yet been announced, but is expected to be in March 2010.

The 2010 Lincoln Cents feature a new reverse design depicting the Union Shield to represent Lincoln’s preservation of the United States as a single and united country. The obverse of the coin features the familiar portrait by Victor D. Brenner with the original details restored. The newly designed cents were released into circulation earlier this year and officially launched on February 10, 2010. 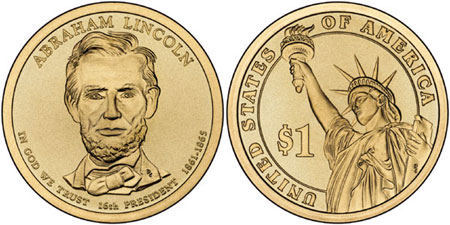 In April, the 2010 Presidential Dollar Uncirculated Coin Set will be released. This set will include satin finish versions of each Presidential Dollar from the Philadelphia and Denver Mint facilities. The US Mint produces these collector version coins for inclusion in annual sets and other special offerings.

In the following months of July, August, and September, the US Mint will release the 2010  Uncirculated Mint Set, 2010 Proof Set, and 2010 Silver Proof Set. The first set will include the satin finish 2010-P & D Abraham Lincoln Presidential Dollars and 2010-P & D Lincoln Cents, along with satin finish versions of other 2010 coins of all denominations. The two proof sets will include the 2010-S Proof Lincoln Presidential Dollar and 2010-S Proof Lincoln Cent, along with 2010 proof coins of all denominations. 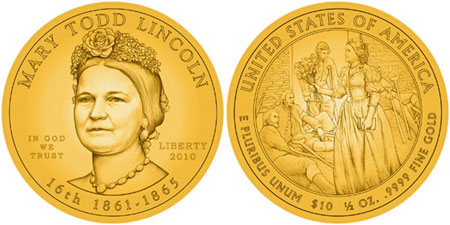 In the month of December, the US Mint will issue the Mary Todd Lincoln First Spouse Gold Coins in uncirculated and proof versions, along with a bronze medal bearing the same design. The obverse of the coin features her portrait and the reverse depicts a scene of the First Lady bringing flowers and books to wounded Union soldiers.

The First Spouse Gold Coin series began in 2007 and has featured the First Spouse of each President, released in the order of the Presidency. The coins are struck in 24 karat gold, contains one half ounce of gold, and have been limited to a maximum of 40,000 coins each. Bronze medals with a diameter of 1-5/16 inches have also been released featuring the same design, but with some inscriptions removed.

The products mentioned above are those that have already been announced or tentatively scheduled. It is possible that the US Mint may create additional products to highlight or feature this year’s coins featuring the likeness of Abraham Lincoln and Mary Todd Lincoln. This will be something to watch for as the year unfolds.