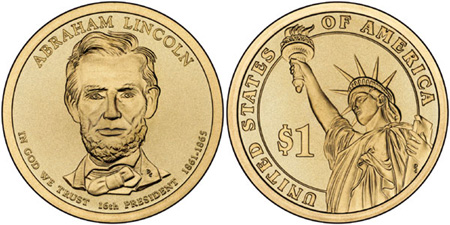 The Abraham Lincoln Presidential $1 Coin will mark the 16th release of the overall series and the final release for this year. The obverse of the coin features a portrait of Lincoln designed by Don Everhart with inscriptions “Abraham Lincoln”, “16th President”, “1861-1865” and “In God We Trust”. The reverse of the coin will feature a rendition of the Statue of Liberty also designed by Don Everhart, which has been used for each release of the broader series.

The launch ceremony has been planned for November 19, 2010 at 10:00 AM ET. The location will be President Lincoln’s Cottage on the grounds of the Armed Forces Retirement Home in Washington, D.C. Lincoln lived at this location for one quarter of his presidency and last visited the cottage the day before his assassination.

Previous launch ceremonies for coins featuring Abraham Lincoln have been well attended. Four separate ceremonies were held to mark the release of each of the four designs issued for the 2009 Lincoln Bicentennial Cents.  Most recently, a ceremony was held in Springfield, Illinois to officially present the new reverse design for the Lincoln Cent featuring the Union Shield.

The upcoming ceremony will be held the same day that the Abraham Lincoln Presidential Dollars will be officially released into circulation. Banks and other depository institutions are allowed to order unmixed quantities of newly released Presidential Dollars, so it will be possible for the public to obtain the new Lincoln Dollars from banks. The United States Mint will also offer 25-coin rolls of circulating quality coins for $35.95 plus shipping and handling.