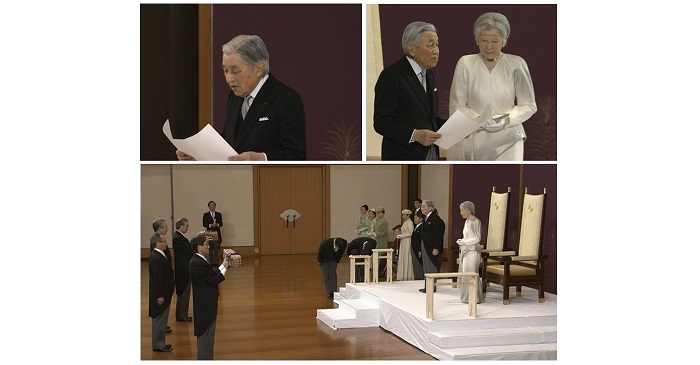 At 5:00 p.m. local time yesterday, His Imperial Majesty, Emperor Akihito of Japan, proclaimed his time as the emperor was coming to its conclusion. In a prepared statement, which he read from the Matsu no Ma State Room of the Akasaka Palace in Tokyo, the official home of the Japanese Head of State, Akihito thanked the people of Japan, having acknowledged their affection and support over the last three decades of his reign and era of Heisei.

In the presence of his wife, Her Imperial Majesty, the Empress Consort Michiko, the 85-year-old emperor wished the nation continued peace and invited the country to welcome in the new era (or reiwa). His successor and eldest son, Crown Prince Naruhito, will ascend the Chrysanthemum Throne at the stroke of midnight, the 1st May.

Akihito, the eldest son of the late Emperor Hirihito (or showa) and the Empress Consort Nagako, was born on the 23rd December 1933 and was raised in the strict etiquette and traditions accorded to the son of an emperor. With the outbreak of the Second World War, he and his younger brother, Prince Masahito, were evacuated from Tokyo until the conclusion of the war. As a defeated power, the Japanese constitution was substantially amended by the occupying United States administration, which relegated the place of the Emperor to that of a titular figurehead. The constitution expressly described the position of that as “the symbol of the State and of the unity of the people.” Governmental power was now vested entirely with an elected parliament and prime minister, according to the new constitution which was ratified in 1947. The constitution also stipulated strict laws of succession, and although Prince Akihito was heir-apparent to the Chrysanthemum Throne from the moment of his birth, his formal investiture as crown prince (rittaishi-no-rei) was finally not held until the 10th November 1952 at the Imperial Palace.

The-then crown prince embarked on studies centring on marine biology, something he had in common with his father. Akihito is a published author on the subject of ichthyology, the branch of zoology devoted to the study of fish. The emperor later wrote papers about the history of science during the Edo and Meiji eras, which were published in Science Magazine and Nature Magazine.

On the on 27th November 1958, the Imperial Palace announced the engagement of the crown prince to Miss Michiko Shōda, a young woman he had met while playing tennis, and, on the 10th April 1959 they were married. The young woman became the first commoner in Japan to ever marry an imperial prince. Their first child was born on the 23rd February 1960 and was named Naruhito, followed by Prince Akishino, born on the 30th November 1965, and daughter, Princess Sayako, born on the 18th April 1969.

On the death of his father, Emperor Hirohito, on the 7th January 1989, the 55-year-old crown prince ascended the throne, becoming, according to Japanese tradition, the 125th monarch to do so. He also became the first emperor under the 1947 post-war constitution. His enthronement ceremony was held on the 12th November 1990 with representatives from nearly 200 countries and territories.

Japanese people were first alerted that the emperor was hinting at an abdication in July 2016 and would do so in favour of his eldest son, but since there had not been an abdication of an emperor since 1817, there was no modern precedence for this to occur. Any move to abdicate by the reigning emperor would require an amendment to the Imperial Household Law, and there were currently no provisions for such a move. It wasn’t until the 8th August 2016, when the emperor gave a rare televised address, where he spoke about his advanced age and declining health. It was this address that implied of his intention to abdicate, and, as a consequence, the bill that would allow Akihito to abdicate was issued by the Japanese government’s cabinet on the 19th May 2017. The National Diet passed a one-time bill allowing Akihito to abdicate on the 8th June 2017, and prepared for the succession of the crown prince. The government made the formal announcement in December 2017 that Akihito would abdicate on the 30th April 2019. During yesterday’s ceremony, after the speech given by the emperor, his personal imperial seal and sword were carried away by the Lord Chamberlain of the imperial court.

The new emperor will be installed officially on the 1st May. He and the new Empress Consort Masako will make their first appearances in public on the 4th May and his enthronement will occur on the 22nd October 2019. His era has been declared as “Reiwa,” which was announced ahead of the abdication on the 1st April. As the succession is restricted only to male members of the imperial family, the new emperor’s 17-year-old daughter Princess Aiko is ineligible to succeed her father. Therefore, Naruhito’s younger brother, Prince Fumihito, will be named as crown prince, followed by his 13-year-old son Prince Hisahito. 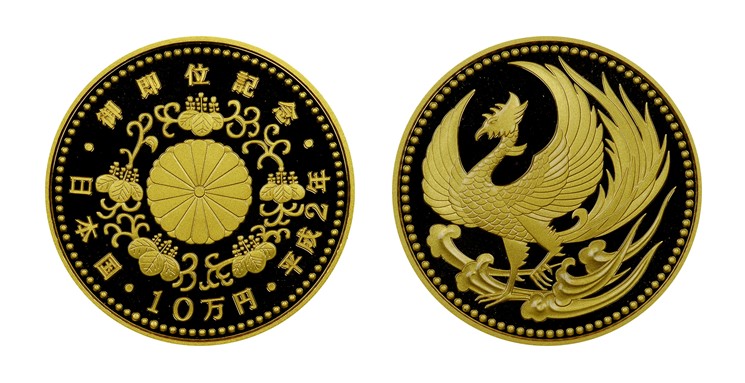 According to a long-held tradition in Japan, images of the emperor are never included on the nation’s coins or banknotes. As a result, there are only symbols and reference to the emperor’s era and regnal year. In 1989, commemorative gold coins were issued on the occasion of Akihito’s enthronement. The 30-gram gold coin of 100,000 yen included the design of a decorative wreath surrounding a stylised chrysanthemum in the centre on the obverse, along with the design of a stylised green phoenix on the reverse. 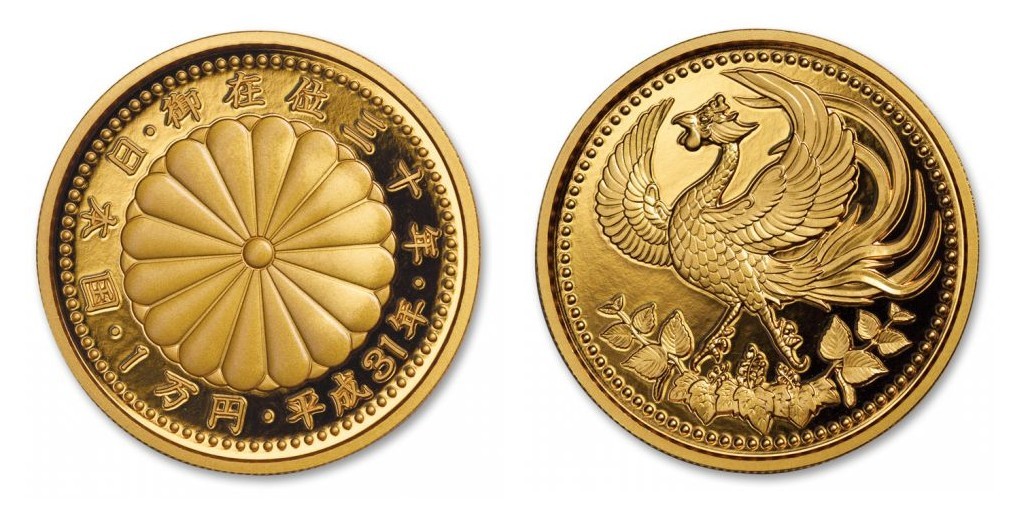 Earlier this year, in celebration of the 30th year of Akihito’s accession, a commemorative gold coin of 20 grams with a face value of 10,000 yen was issued by the Bank of Japan with a modified recreation of the 1989 reverse design featured.

A commemorative set of coins inscribed with “Heisei 31,” indicating the 31st year of Japan’s Heisei era, was issued earlier this year. The Mint of Japan decided to increase the production of these annual sets from 30,000 to 50,000 sets due to this item being heavily over-subscribed. The Mint of Japan has also announced that circulation coins carrying denotations of the new era name “Reiwa” are likely to go into circulation after this summer, with priority given to the 500 and 100-yen denominations. It is expected that accession or enthronement coins marking the occasion for the new Emperor Naruhito will be announced by the Japanese Finance Ministry in due course and in time for the actual ceremony.