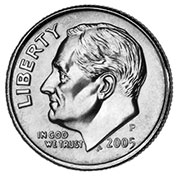 My five year-old daughter took her first steps towards being a coin collector recently when she asked for a set of coin books for dimes and dollars.

After getting home, I gave her two rolls of dimes, and she began filling in the books in earnest: opening up the rolls and reading the dates and mint marks, then finding the correct place for the coins in the books.  She designated the book for 1964-1999 dimes the ‘old’ book and the book for the dimes after 2000 the ‘young’ book.

Later on, she asked for help, partially to search through the coins, but mostly to finish pushing the coins into the books.  She remarked, “the really old ones just slipped right in, they are easy.”  She was sad if a duplicate was found, but was happy if the second coin was in a better condition than the first, and could be swapped out.  After searching through the rolls, she filled 42 slots of the 86 slots in the two books, putting her well on her way to completing her first coin series.

I am not quite sure who was more proud: my daughter or myself.