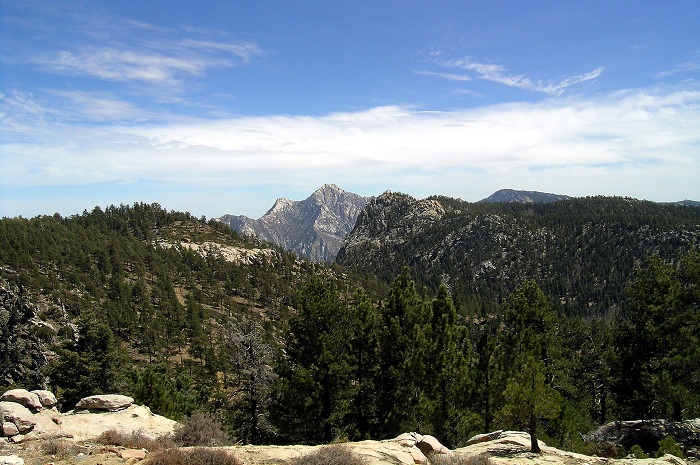 The first stop of our numismatic tour of Mexico begins in the geographically and culturally diverse state of Baja California. In the year 1539, the Spaniards who arrived at the peninsula were so taken by the beauty of the landscape that they believed they had stumbled upon a fabled island of female warriors described in The Exploits of the Very Powerful Cavalier Esplandian, Son of the Excellent King Amadis of Gau by Garcia Ordonez de Montalvo. The beauty of Baja California is why tourism is one of the largest contributors to the state’s economy. This state engulfs the northern half of the Baja peninsula as well as several islands, hence it is often called “Baja California Norte” to distinguish it from its more sparsely populated southern neighbor, Baja California Sur. While its capital city is Mexicali, Baja’s most famous (or infamous) and populated city is Tijuana, with an apropos motto for the commencement of our journey: Aqui empieza la patria (The fatherland begins here).

Being part of a peninsula, Baja California is bordered on the west by the Pacific Ocean and on the east by the Sea of Cortez. Its climate ranges from Mediterranean to arid, complemented by a healthy variety of beaches, islands, mountains, forests, and deserts. The state and its climate are divided by the Sierra de Baja California, a mountain range which contains the peninsula’s highest point: the Picacho del Diablo. A Mediterranean climate is enjoyed along the northwest coast of Baja California and gradually transitions to a desert climate toward the southern half of the coast. Around the mountain ranges of central Baja California are alpine forests with fog and greater humidity than the rest of the state, and snowfall is not uncommon in the Sierra de Juarez and Sierra de San Pedro Martir. The eastern slopes of the mountains are subjected to a strong rain-shadow effect which leads to an arid climate in the eastern half of Baja California. The Sonoran Desert and Mexicali Valley regions often experience temperatures that soar beyond 47 degrees Celsius (116.6 degrees Fahrenheit). 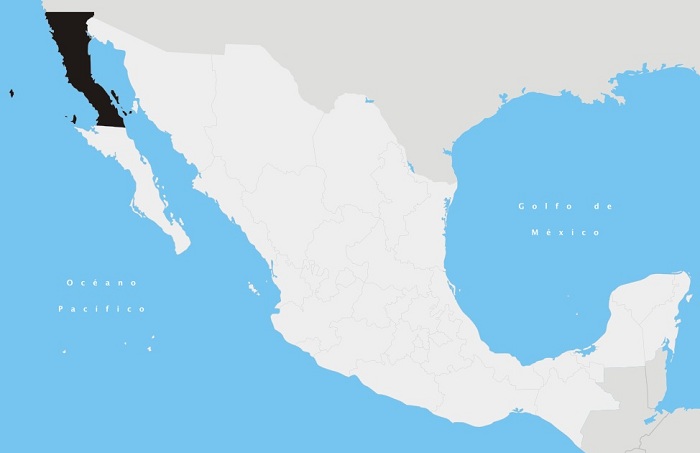 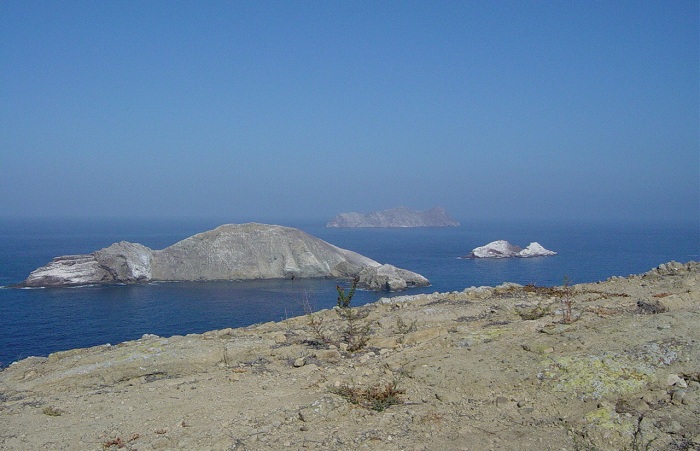 Coronado Islands, to the west of Tijuana.

As a consequence of the varied geography and climate, Baja California’s flora and fauna are equally varied. Local arboreal specimens to be found in Baja California are largely from the pine family, including the Monterey pine, Boojum tree, and California pine. Some typical Baja flowers are the California Poppy and Giant Coreopsis, both noted for their sunny, golden colors. The entire fish genus Bajacalifornia was inspired from the name of the Mexican state. Sea otters, pronghorns, bighorn sheep, and California quails are quintessential fauna of the region. Not surprisingly, Baja’s coinage features its notable wildlife: a 2005 silver coin and other modern commemoratives depict a bighorn sheep on the reverse. 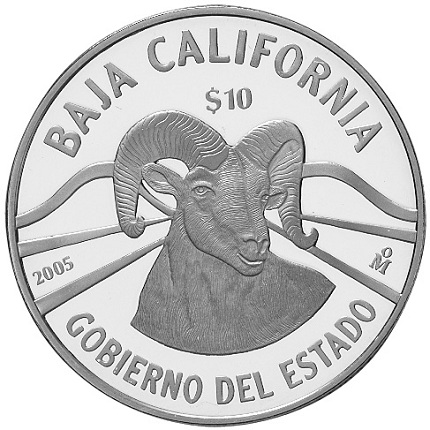 Part of Mexico’s Confederation commemorative series: a Baja California 10-pesos coin, 2005, struck in .999 fine silver with a mintage of 6,000.

While Baja California has innumerable different types of plants and wildlife, it also boasts a rich and robust culture. The hunter-gatherer settlers coming to Baja California began more than 11,000 years ago and left us spectacular rock paintings that are some of the finest in the world. These are known as the paintings of the Sierra de San Francisco. European settlers made landfall in 1539 and for three centuries power in the region changed hands among Jesuit, Franciscan, and Dominican missionaries. During the turmoil in Mexico at the turn of the 20th century, Baja California suffered minimal negative consequences due to its distance from Mexico City while simultaneously being a critical region for rallying and producing rebel forces during the Mexican Revolution. After the dust settled for the next several decades, Baja became Mexico’s 29th state in 1952.

Following the trend of diversity explored thus far, the people and culture of Baja California are equally diverse today. In addition to many different indigenous peoples, Baja’s largest ethnic group is Mestizo, but due to its proximity to the United States it also has a large White European population at 40%. There is also a sizeable minority of East Asian and Middle Eastern immigrants. Major staples of the economy are mining, tourism, and real estate. The majority religion is Roman Catholicism at 72.1%, but the influx of immigrants has varied the type and amount of other religions as well as those who say they are without religion. Needless to say, the rich variety of culture in Baja makes it an interesting and infinitely entertaining tourist hot spot.

Modern coins celebrating Baja California are discussed in detail in volume 2 of the Whitman Encyclopedia of Mexican Money (“Modern Coins of Mexico, 1905 to Date”). You’ll also find various Baja California pieces in volume 3. The latter book, which debuts in the summer of 2016, covers early Mexican numismatics from the Carlos and Johanna era through the War of Independence, state and federal coppers, Emperor Maximilian, Republican decimal coinage, and more. 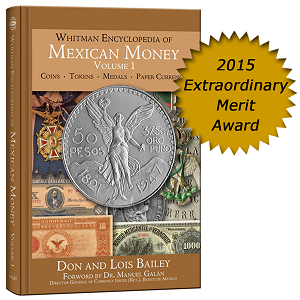 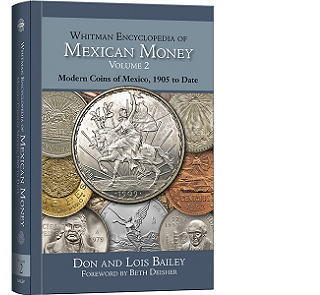 The next stop on our numismatic tour of Mexico will be Baja California Sur, also known as the Aquarium of the World.