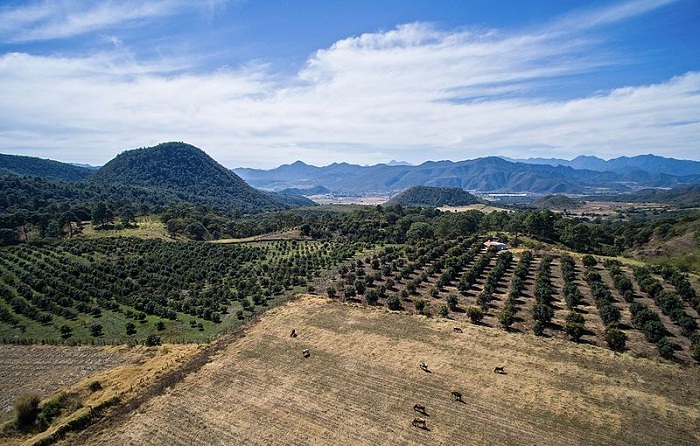 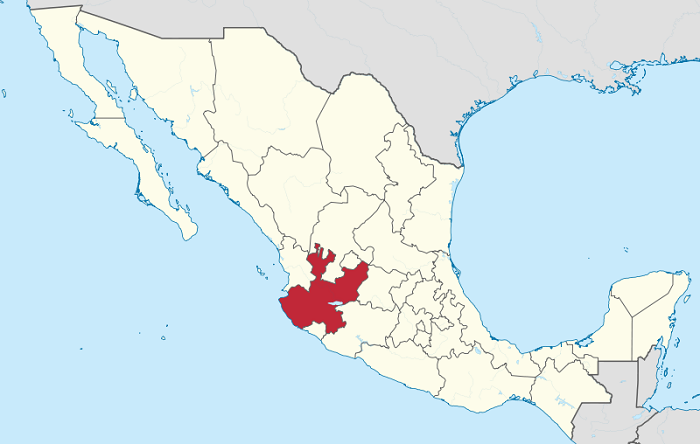 Jalisco is a cultural powerhouse in Mexico, and is often considered by many to be the heart and soul of the nation—hence its motto: Jalisco es México (Jalisco is Mexico). This exciting stop on our numismatic tour is the state that bestowed upon the world the alcoholic beverage tequila. Mariachi, rodeos, and the Mexican Hat Dance, among many other traditions, were born in Jalisco as well. Jalisco is also one of Mexico’s most populous and well-developed states, known for its excellent educational opportunities and universities. Now, let’s dive into the iconic and legendary state of Jalisco. 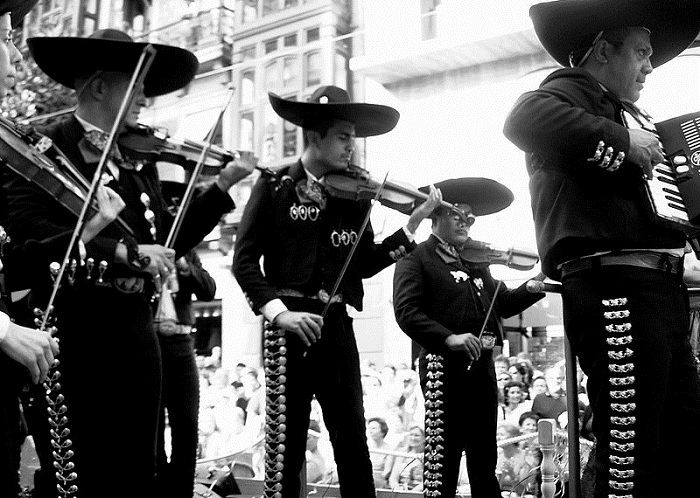 Jalisco is unique in that it contains all five of Mexico’s native ecosystems: tropical evergreen forests, temperate forests, grasslands, tropical deciduous forests, and arid scrublands. The majority of the state’s climate is temperate, but there are 29 different climate zones in Jalisco, making it quite diverse. There are three primary river systems throughout the state that empty into the Pacific Ocean: the Lerma/Santiago River; southern rivers; and rivers that flow directly into the ocean. There are some notable volcanoes in the area as well, such as the Tequila Volcano. As a consequence of Jalisco containing so many ecosystems, the biodiversity of the state is quite extraordinary.

Jalisco boasts a total of eight areas under the protection of conservation laws in addition to four other areas that are designated as federal marine-turtle sanctuaries. There are a great deal of protected rainforests in addition to oak, fir, and pine woodlands. Various palm species dot the coastline. 52% of Mexico’s bird species live in Jalisco alone, along with an impressive 40% of Mexican mammals and 18% of Mexican reptiles. 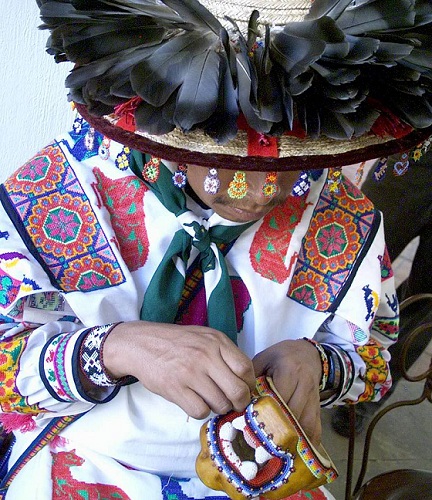 Not surprisingly, Jalisco’s people are as colorful and diverse as its wildlife. Somewhere between 10,000 to 12,000 years ago, nomadic peoples began settling in the area, leaving many little clues and trinkets behind that proved their existence. After Hernán Cortés conquered Tenochtitlan in 1521, Spanish settlers began to make their homes in Jalisco. Though border disputes with natives were common around the newly founded city of Guadalajara, the people of Jalisco eventually came to agreeable terms and grew quite prosperous in the 1600s and 1700s due to exports from the Pacific Ocean to the rest of Mexico.

In 1810 a Spanish priest named Miguel Hidalgo pushed for the state’s independence from Spain and a successful coup of the local militia thwarted Spanish rule. During the Mexican Revolution, disgusted by the greediness of the upper class in Guadalajara, Pancho Villa marched into the city and demanded that its wealthy citizens give him a “loan.” This request was honored, but to the nobles’ dismay and to the peasants’ delight, Pancho Villa took the money and gave it all to the city’s poor, who had needed it so desperately. 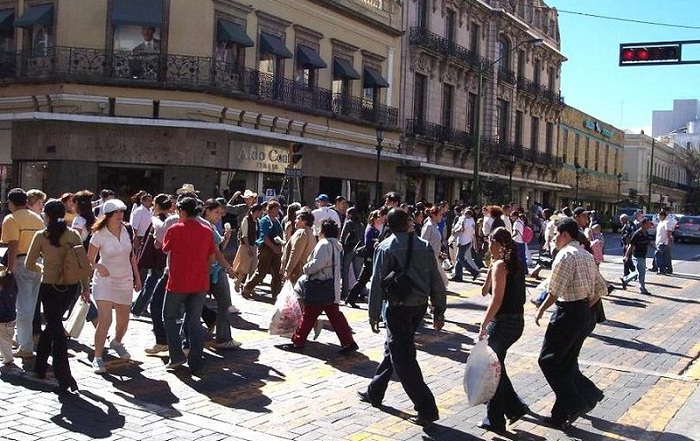 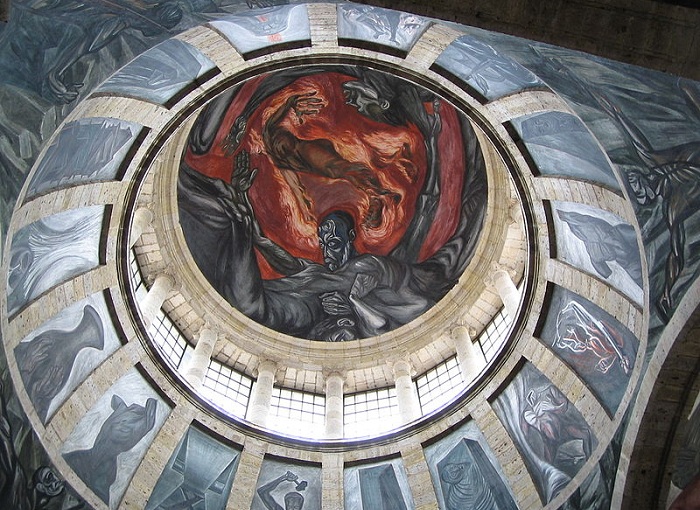 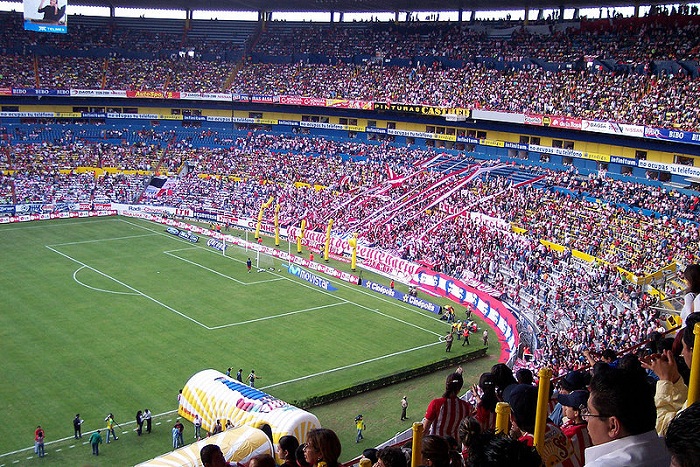 Today most citizens of Jalisco live in and around Guadalajara, making the city quite bustling and crowded at times since Jalisco is also Mexico’s fourth most populous state overall. Jalisco represents what most people tend to think of when they think of Mexico, as the iconic revolutionary wide-skirt dresses of women adorned with colorful ribbons are commonplace here. Jalisco’s Spanish settlers invented the first quesadillas, gorditas, and enchiladas when they combined the local corn with European food staples. The most famous and elite Mexican soccer team, Los Chivas de Guadalajara, is based in Jalisco and only accepts Mexican players into its ranks. The extremely popular tourist destination, Puerto Vallarta, graces Jalisco with its gorgeous white-sand beaches and tropical flora. 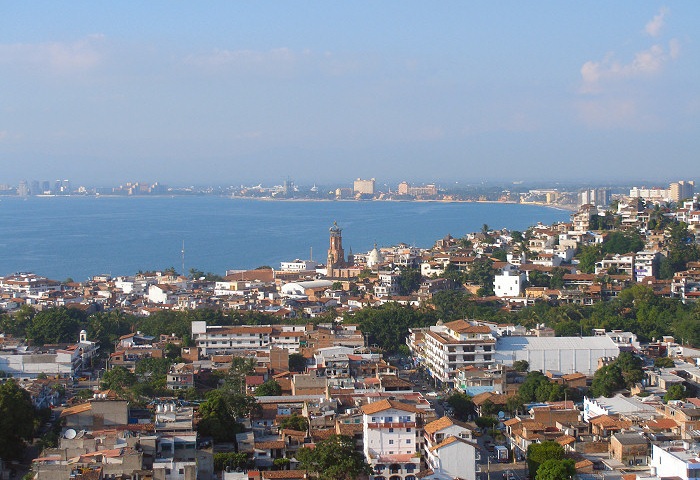 The skyline of Puerto Vallarta. (Photo by Coolcaesar.)

Our numismatic journey continues with a 2006 silver coin of Jalisco, with a face value of 10 pesos. The reverse depicts the Cabanas Hospice, built in the early 1800s to provide care and shelter for orphans, the elderly, the handicapped, and chronic invalids. On the obverse, the Mexican national shield is proudly displayed. The coin measures 40 millimeters in diameter and has a smooth rim. It is part of a series of commemorative coins minted in .9999 fine silver. Only 6,000 examples were made of this beautiful and historically significant coin. 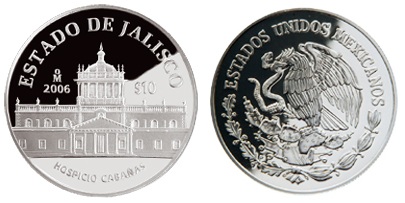 Going further back in Mexican history, the state of Jalisco was the source of the famous Army of the North (Ejercito del Norte) pesos and several other Revolutionary-era coins. In volume 1 of the Whitman Encyclopedia of Mexican Money, authors Don and Lois Bailey describe this coinage: “On January 18, 1915, Pancho Villa left Jalisco under the watch of General José Delgado, whom Villa charged with issuing 1-, 2-, and 5-centavo coins. At a later date, General Delgado had several pattern pieces of the 10 centavos and the 1 peso coined. He presented one of each to Venustiano Carranza when the latter visited Guadalajara. Delgado requested permission from Pancho Villa to coin them for regular issue, but was denied.”

The state copper coinage of Jalisco, dating from the 1820s to the early 1860s, is also discussed in volume 1. These and other coinages are covered in great detail in volumes 3 and 4 of the Encyclopedia.

Now it is time to move on, and our next stop is the land of “hot waters”—Aguascalientes.