A Game of Thrones: four coins from House Targaryen, obverses and reverses.

Shire Post Mint, a family-run mint out based in Arkansas, has been churning out realistic interpretations of fantasy-series coinage for over 15 years. Relying on copious research into the languages and imagery found in epics like A Game of Thrones and The Lord of the Rings, the Mint strikes detailed coins using traditional techniques.

The company aims to offer evocative yet realistic “in-world” pieces that could be used by the characters in these stories, and their attention to detail is worthy of note. For instance, the coins pictured below represent four denominations of coins that might be carried by hobbits in J.R.R. Tolkien’s Lord of the Rings series. Pictured are a Shire Thrup’ny, Shire Penny, Shire Haypenny, and a Shire Farthing. They are composed of copper and are available as a set for $25.00. 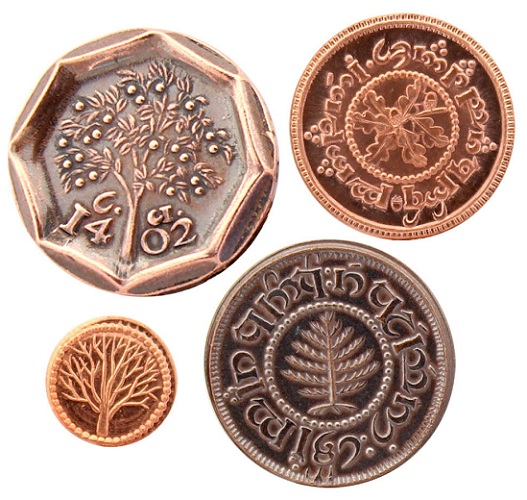 The Hobbit: “The Shire” set of four coins.

Also from the Hobbit are a set of four silver shillings composed of 1/8 oz. of .999 silver. 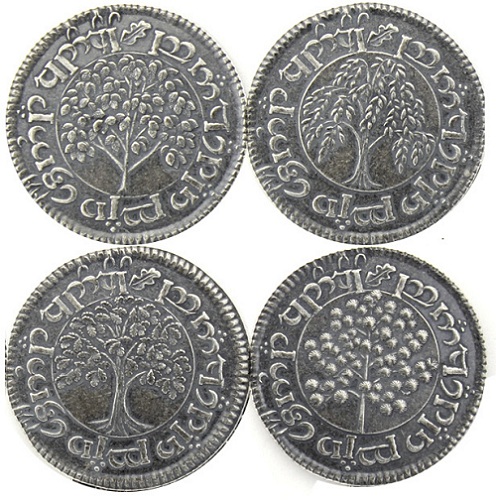 The Hobbit: “The Shire” set of four silver shillings.

A Games of Thrones has provided the Mint with opportunities to explore the coinage of all six houses of Westeros, including House Lannister, House Greyjoy, House Targaryen, House Martell, House Baratheon, and House Stark, which is pictured below. 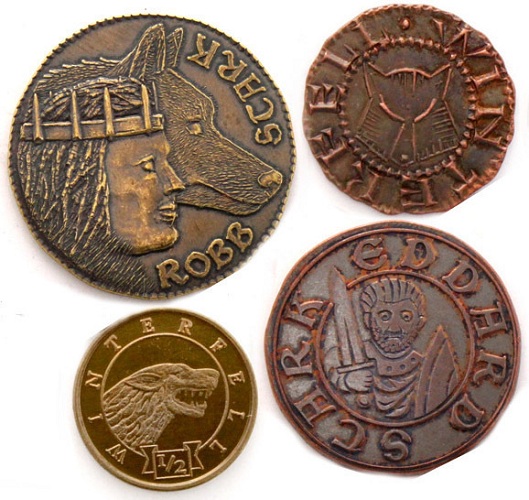 A Game of Thrones: four coins from House of Stark.

They’ve even produced “The Iron Coin of the Faceless Man,” pictured below, based on the coin given to Arya Stark by the assassin Jaqen H’ghar in A Clash of Kings and Season 5 of the HBO series. It is composed of pure iron and costs $14.00.

The Shire Post Mint produces coins related to other fantasy series as well, including The Wheel of Time, Conan the Barbarian, and the Kingkiller Chronicle. All of these coins are officially licensed; for more information, please visit the Web site of the Shire Post Mint.