The U.S. Mint released both the 2016 Birth Set and 2016 Happy Birthday Coin Set yesterday, giving collectors an opportunity to obtain two (Shawnee and Fort Moultrie) of this year’s America the Beautiful quarters in Proof format. The 2016 ATB Quarter Proof Set is also on deck at the Mint, set to go on sale Monday, January 11. That makes now an ideal time to take a look at all of the designs for this year’s ATB quarters, with the Uncirculated versions placed on the left side and Proofs to the right.

All ATB quarters share an obverse that includes John Flanagan’s 1932 portrait of George Washington, along with the inscriptions UNITED STATES OF AMERICA, LIBERTY, IN GOD WE TRUST, and QUARTER DOLLAR.

The Shawnee National Forest quarter will be the first ATB issue of 2016, with an official launch ceremony scheduled for Thursday, February 4 in Harrisburg, Illinois. The coin’s reverse, designed by Justin Kunz and engraved by Jim Licaretz, features a red-tailed hawk soaring over Camel Rock. Inscribed along the rim are SHAWNEE, ILLINOIS, E PLURIBUS UNUM, and 2016.

The reverse design for the Cumberland Gap National Historical Park quarter was created by Barbara Fox and engraved by Joseph Menna. The image depicts a frontiersman looking west over the Cumberland Gap, which was often crossed by pioneers on their way to Western Kentucky and Tennessee. Inscribed along the rim are CUMBERLAND GAP, KENTUCKY, E PLURIBUS UNUM, and 2016, with FIRST DOORWAY TO THE WEST included in the field above the mountains. The Mint will hold its launch ceremony for this quarter on Monday, April 11, in Middlesboro, KY.

The third release of the year will be the Harper’s Ferry National Historical Park quarter. This reverse was designed by Thomas Hipschen, engraved by Phebe Hemphill, and features an image of John Brown’s Fort, where Brown and his men faced their last stand during the raid on the Harper’s Ferry Armory in 1859. Inscribed along the rim are HARPER’S FERRY, WEST VIRGINIA, E PLURIBUS UNUM, and 2016. JOHN BROWN’S FORT is also included in the field below the building. Circulating issues of this coin will be released on June 8.

The Theodore Roosevelt National Park quarter, designed by Joel Iskowitz and engraved by Phebe Hemphill, will be the fourth ATB quarter of 2016. The Mint has yet to set a launch date for the coin, but the 2016 product schedule currently shows that sales for rolls and bags of this issue are expected to begin in late August. The image features a rendering of Theodore Roosevelt on horseback near the Little Missouri River, with the inscriptions THEODORE ROOSEVELT, NORTH DAKOTA, E PLURIBUS UNUM, and 2016 placed around the rim. 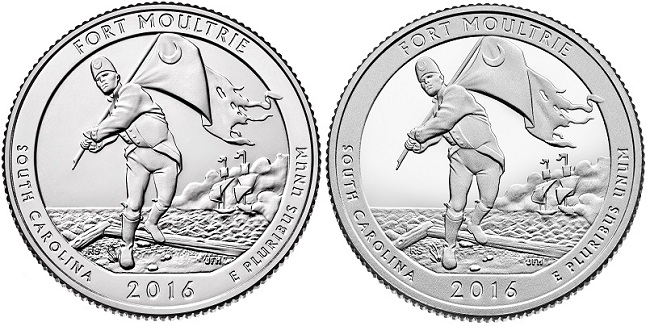 The final ATB release of this year will be the Fort Moultrie at Fort Sumter National Monument quarter, designed by Richard Scott and engraved by Joseph Menna. The image carries a depiction of Sergeant William Jasper bearing a regimental flag during an attack from a British ship. Inscribed along the rim are FORT MOULTRIE, SOUTH CAROLINA, E PLURIBUS UNUM, and 2016. As with the Theodore Roosevelt quarter, the Mint has yet to set a release date for this issue, with rolls and bags containing circulating issues of this coin due to go on sale in November.