Over the weekend, I picked up the 2013 copy of  The Official Red Book: A Guide Book of United States Coins. I purchase the new edition of the book every year and refer to it several times per day. This single book puts an incredible amount of information on United States coins at my fingertips for quick and easy reference.

I recommend that all coin collectors have a new or recent edition of the Red Book within their numismatic library. It can also make a great gift for someone just starting out in coin collecting. When I first started collecting, I used my first copy of the Red Book until the binding broke. Now, I always purchase the spiral bound version.

When flipping though the newest edition, I did notice a few errors, some of which have also appeared in previous editions. These are not typos or minor differences in figures, but more significant issues that could potentially have an impact on someone relying on the information presented. I also noted a few omissions which could be updated with available information.

Here are some issues that I hope the editors of the Red Book will look into before the release of the next edition:

The mintage figures for most circulating 2011-dated coins are listed in italics (indicating that they are approximate) and seem to have been based on US Mint coin production figures from late 2011. Therefore, in most cases these mintages are slightly under the final mintage since a few months of production are missing. As an annual print publication, it is understandable that mintages for some of the newest releases are not up to date.

In the case of the 2011 America the Beautiful Quarters, the Red Book lists mintages of 180,600,000 Philadelphia and 168,000,000 Denver for each individual design, which is massively higher than the actual mintages. It seems that the total production across all five different designs was inadvertently applied to each individual design. The mintages by individual design are significantly lower. For example, production for the Gettysburg National Military Park Quarter was 30,800,000 Philadelphia and 30,400,000 Denver. 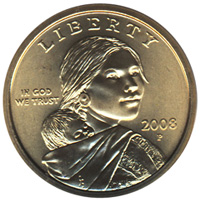 The basis for the incorrect higher numbers seems to be the US Mint’s 2008 circulating coin production figures, which include a large number of 2009 Native American Dollars that were struck during December 2008.

Correspondingly, the 2009 Native American Dollar mintages in the Red Book should be higher by the displaced amount.

While there are possibly similar issues for other coins, this has a significant impact because it makes the lowest mintage coins of the Sacagawea Dollar series look like they are amongst the highest mintages coins of the series.

The Red Book lists a mintage of 146,300,000 Philadelphia and 148,960,000 Denver for each of the 2011 Presidential Dollars. This is a similar situation to the mistake for the 2011 ATB Quarters, where the production across all designs was used for each individual design.

The figure reported for the uncirculated version would place this issue amongst the lowest mintage modern commemorative silver dollars. The correct figure puts the coin back into the average mintage range. 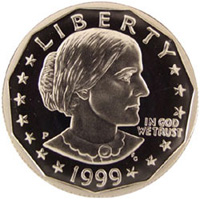 There is no mintage listed for the 1999 Proof Susan B. Anthony Dollar. The mintage figure that I have is 750,000, which makes it the lowest mintage proof issue of the series.

The 2013 Red Book provides separate listings for the satin finish 2009 Lincoln Cents and notes their different composition of 95% copper and 5% tin and zinc. This is a change from last year’s edition where the special composition was described, but separate listings were not given for the satin finish versions. If these issues are being listed separately, it might be appropriate to also list their mintages of 784,614 based on the mintage for the 2009 Uncirculated Mint Set. Other satin finish coins of 2005-2009 are not listed separately, but in this case the difference from the business strike is both the finish and the composition.

There is no mintage listed for the 1998-S Matte Proof Kennedy Half Dollar. (There are mintages listed for the 1994 and 1997 matte proof Jefferson Nickels, which were issued under similar circumstances.) The mintage figure that I have is approximately 62,000 coins based on the sales of the 1998 Kennedy Collector’s Set.

The mintage figures listed for the First Spouse Gold Coins start looking strange around the 2008 Martin Van Buren’s Liberty coin. For this and the next four coins, the figures seem to reflect partial sales. From the 2009 Margaret Taylor coin onwards, no mintages are provided. These are the same partial/ incomplete figures that appeared in the last edition of the Red Book. While most commemorative issues and American Eagles have been updated with fairly complete information through 2009 or 2010, no updates have been made to the mintage information for First Spouse Gold Coins. Last reported sales data, which provides an approximate mintage, is available for all First Spouse Gold Coins through the end of 2010.