As public life was severely impacted by the currency crisis in Germany during this period, private printers around the country were busy printing new bank notes to keep up with the demand, even though many notes were already worthless by the time they came off the press. The state printer, usually in charge of printing new bank notes, had started to ask private printers for help with printing new issues. This period produced a plethora of different types, varieties, and subvarieties. While the Standard Catalog of World Paper Money gives a good introduction to the major types, individual types vary by printer. For example, notes of a certain pick number can look different between each printer. Some notes carry serial numbers, but as 1923 progressed, fewer did, and the notes started to look more like checks.

Collecting bank notes of this period is fascinating, and while completion is a daunting task, adding a few interesting varieties to your collection to illustrate this tumultuous period in German history is relatively easy and surprisingly affordable. In this article, we will take a look at how the German bank notes developed during this period through several interesting pieces. 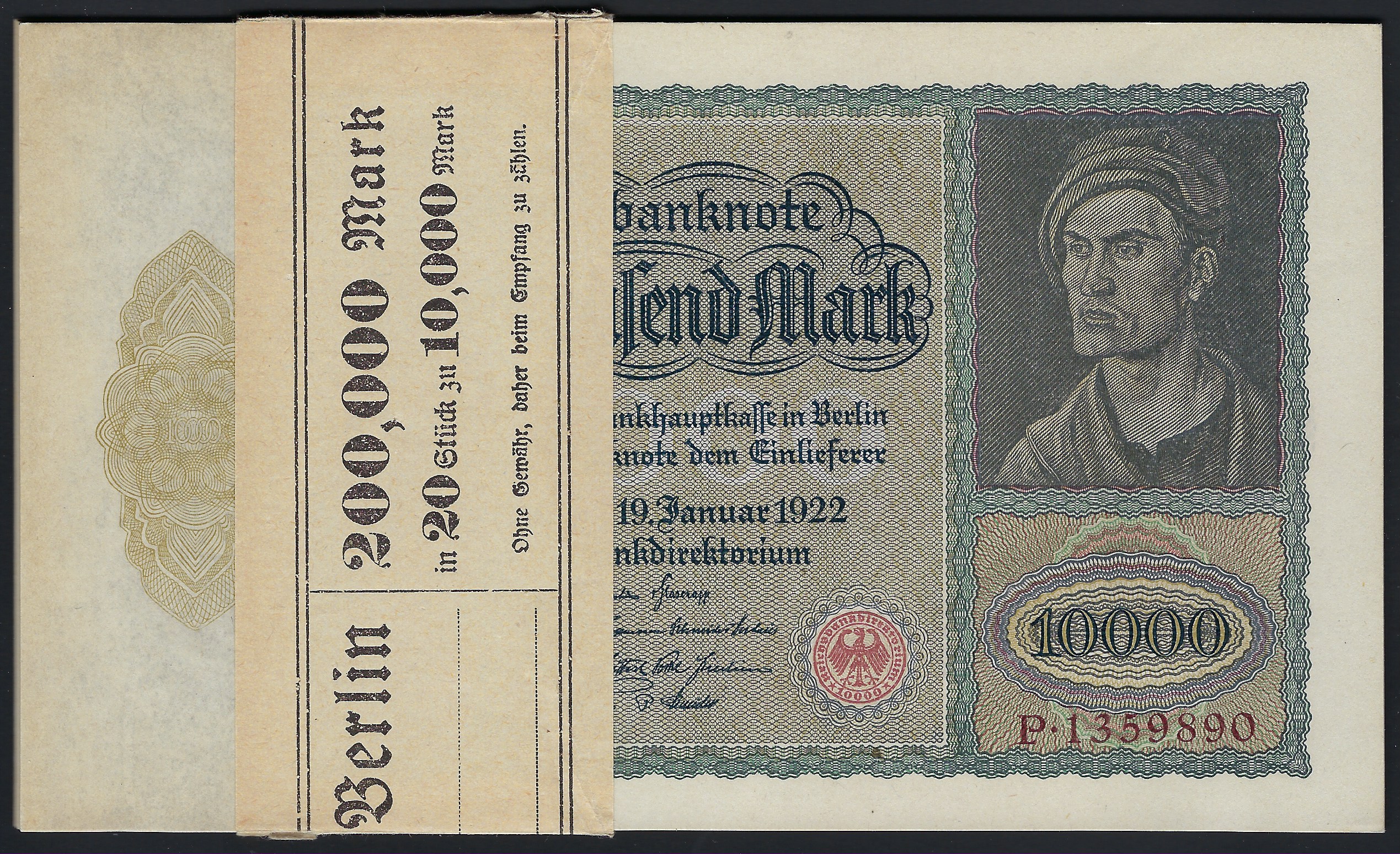 When first issued, this large-size bank note actually represented quite a bit of money, but soon it had become virtually worthless. This type went through various printings, each different in size or back design. A famous type note, the portrait of a man is by the famous German painter Albrecht Dürer. If you turn it 90 degrees sideways and look at the man’s neck, you can actually see something that resembles a devil’s mask. 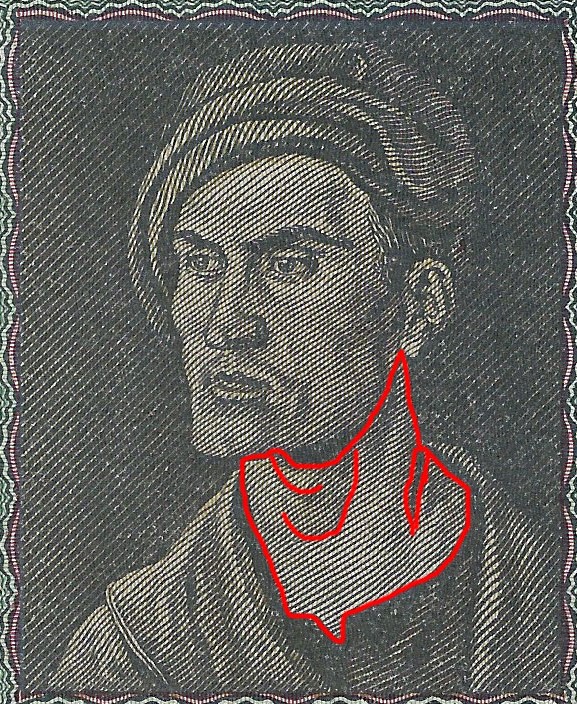 Close-up of the portrait, featuring what many consider a devil’s mask or face. 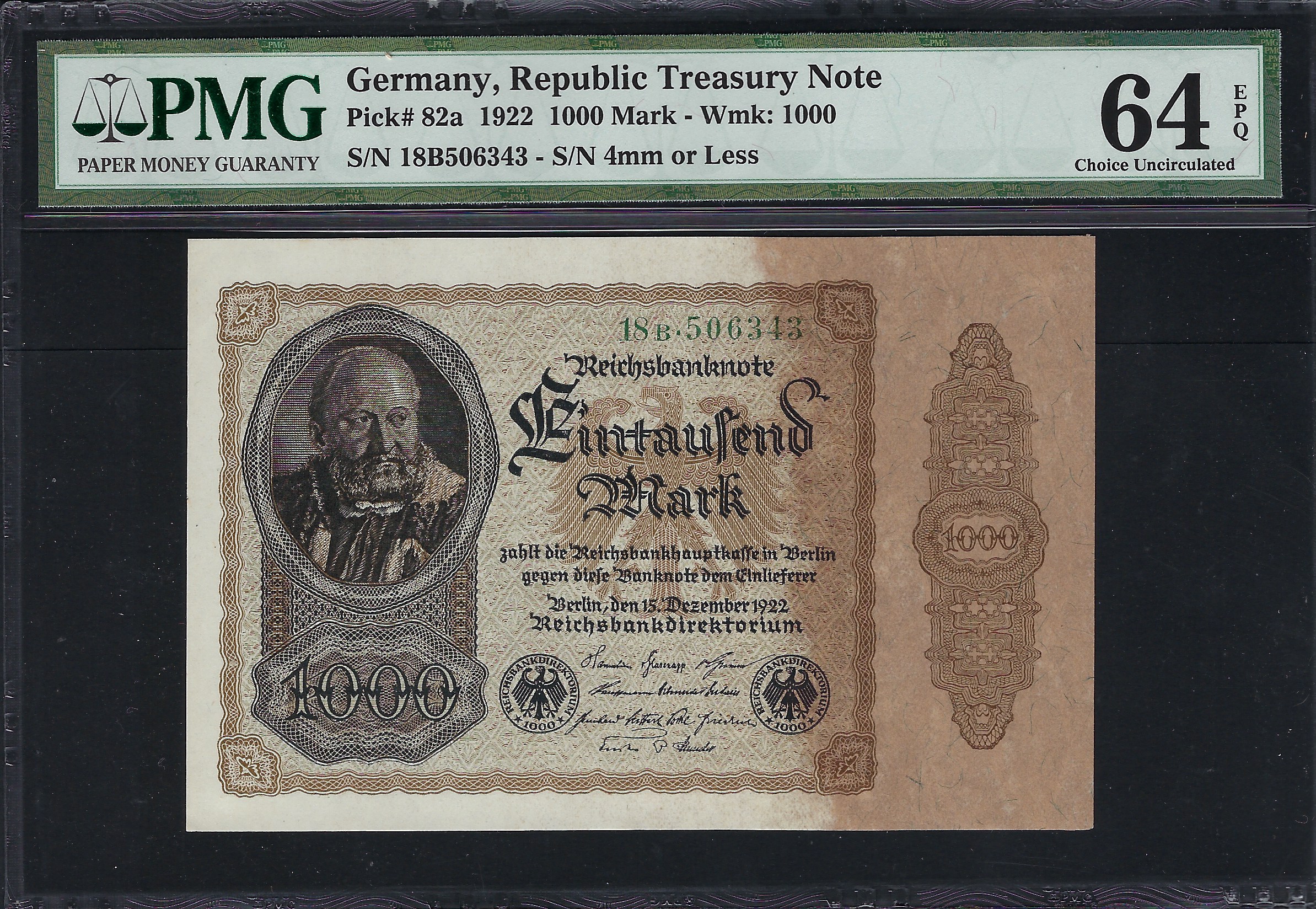 By December 1922, inflation had started to set in, but relatively low-value bank notes were still being printed in comparatively high quality. This particular example, however, saw very little circulation, as it had already become worth mere cents by the time it was issued. At this point, 50,000-Mark bank notes had already been issued for circulation. The portrait is of mintmaster Jörg Herz and comes from a painting by Georg Penz, who lived in Nürnberg during the first half of the 16th century. 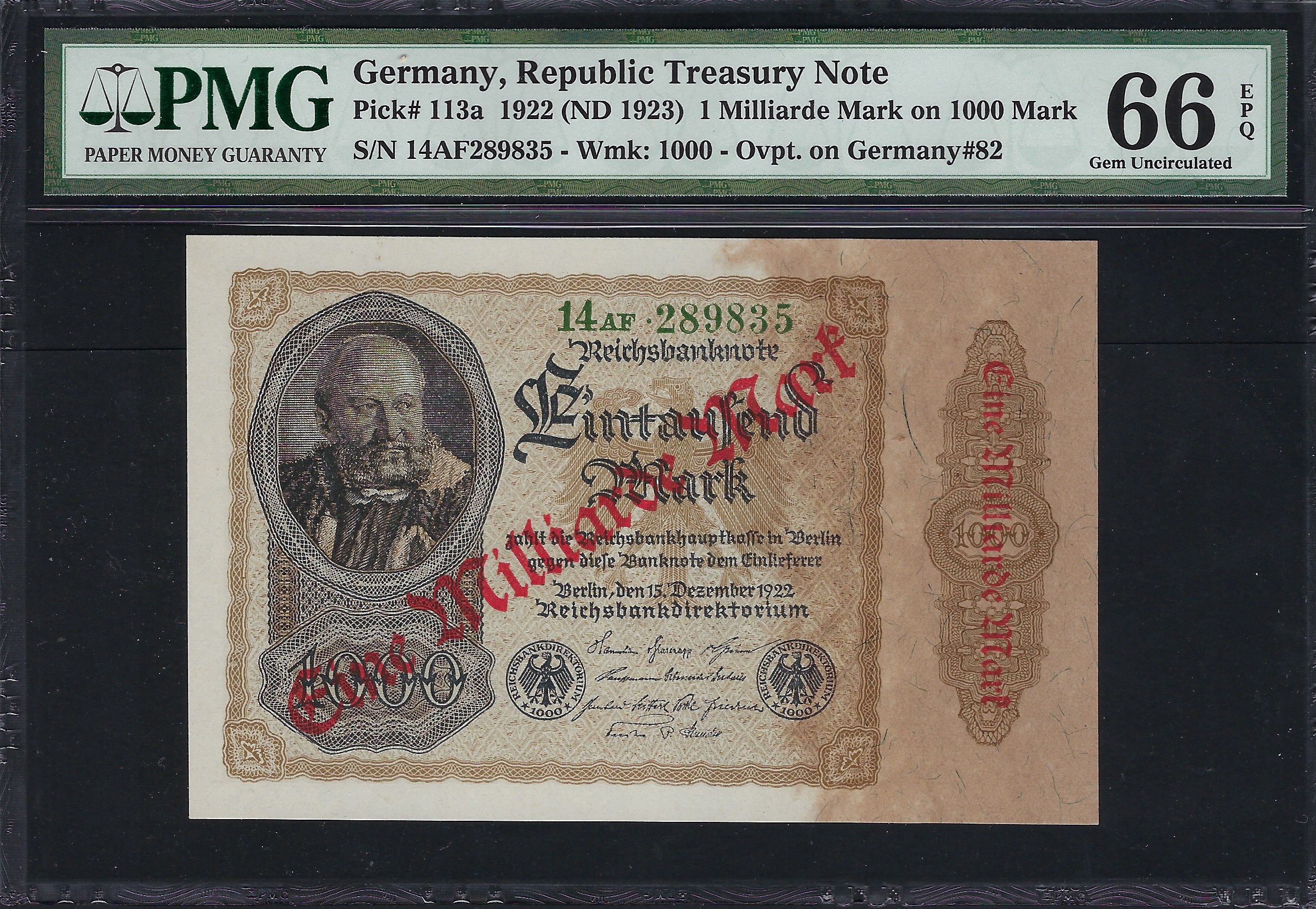 With huge stacks of now worthless bank notes sitting at the various printers around the country, some were overprinted and issued at new values. This was a relatively simple process, but because of this, it was so easy to do by anybody having stacks of the old bank notes on hand and access to a printing press, making counterfeits relatively easily made. As a result of this, overprinted bank notes do not occur all that often during this time period.


Over time the bank notes became simpler and simpler, as there simply was not much time to carefully design new ones. Most of the later issues come only printed on one side, and many of the lower values do not carry a serial number either. 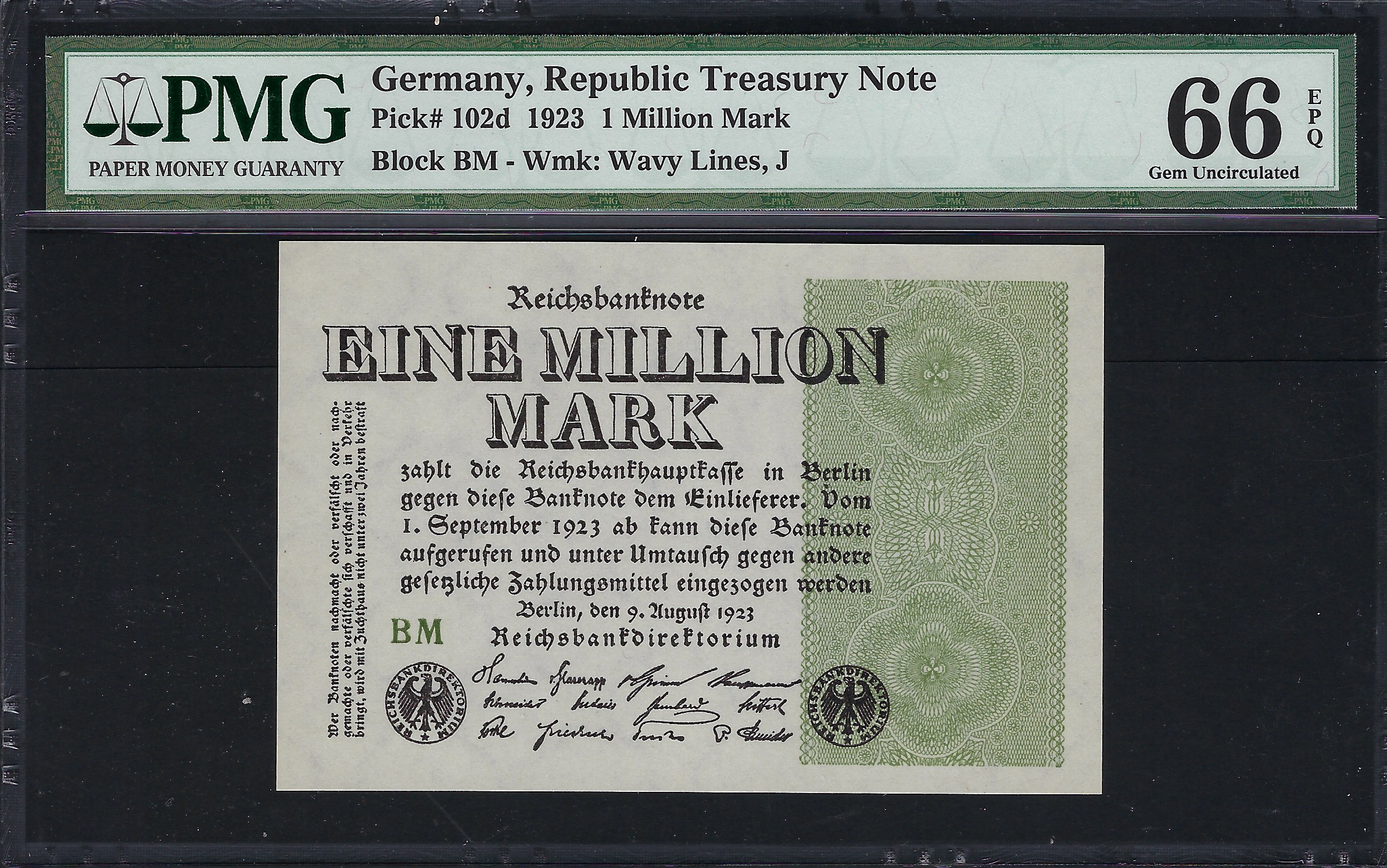 The final issues were printed as the bottom had fallen out from under the German Mark, but the old German Mark would eventually (in 1924) be exchangeable for the new German Rentenmark at a rate of one trillion old Marks to one Rentenmark (which was equal to $4.20 U.S.). Prior to this, 12 zeros had been cut from the old Mark, which had continued to circulate together with the new Rentenmark and had been valued internationally at about 4.2 trillion Marks to a U.S. dollar until it ceased to exist and the Rentenmark became the only currency in Germany. This ended a period of hyperinflation that had taken several years and crushed the German economy. 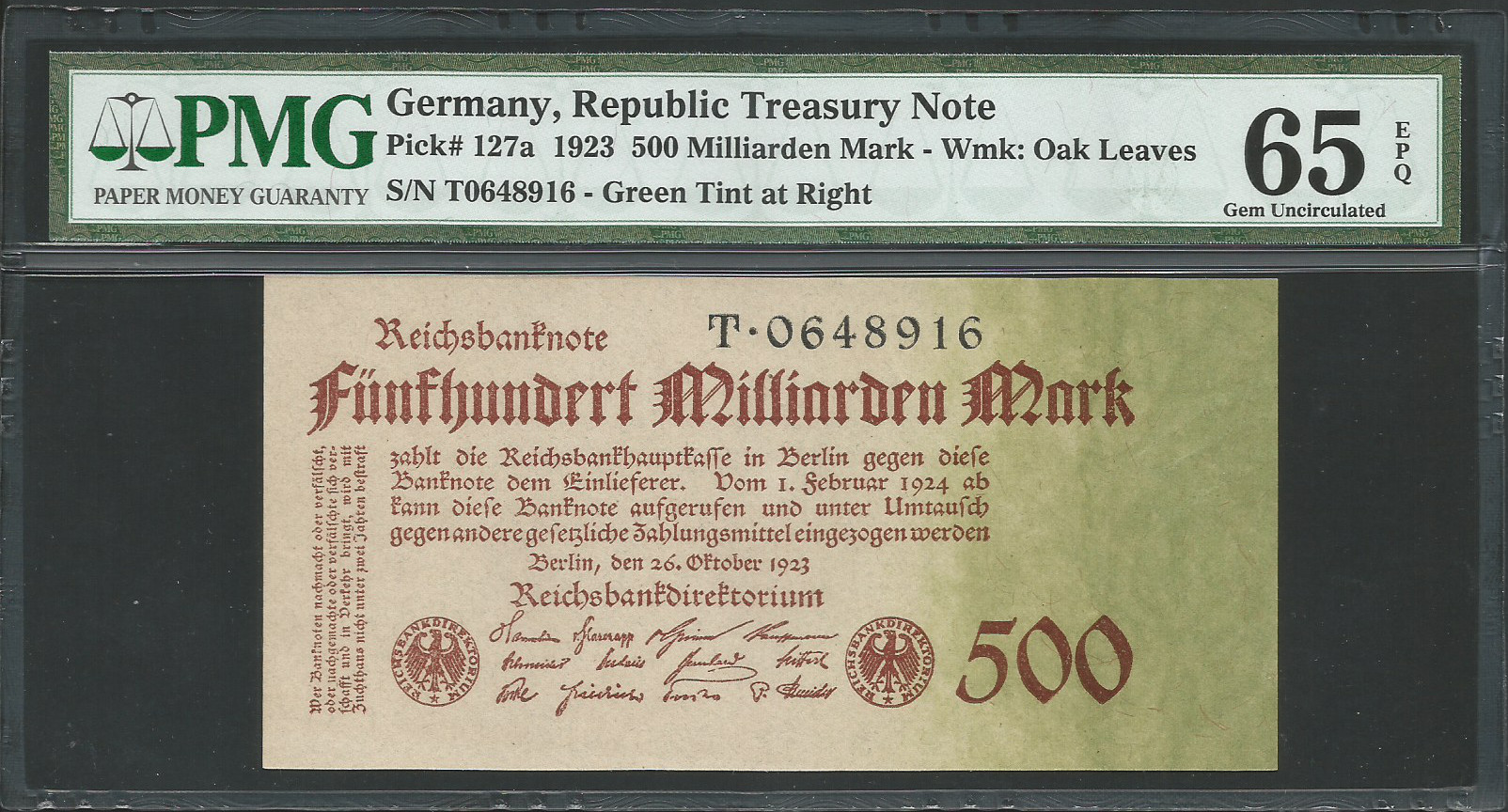 * These figures come from the book The Downfall of Money by Frederick Taylor. A fascinating work on this part of Germany history, and a recommended read.

Happy Holidays to all our readers