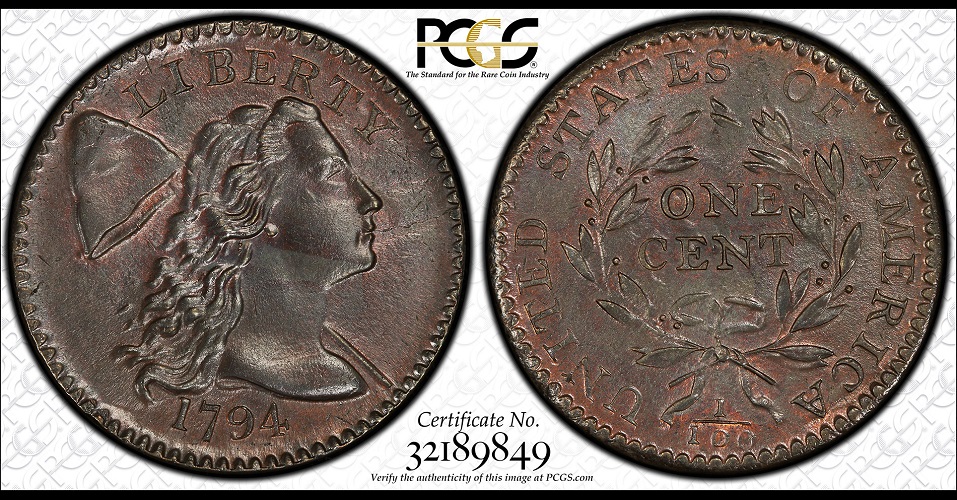 This 1794 Liberty Cap S-57 Head of 1794 large cent once belonged in the Lord St. Oswald and D. Brent Pogue Collections and was repurchased by Walter Husak in 2017. It sold for $164,500. Courtesy of PCGS TrueView. Click image to enlarge.

(Santa Ana — September 29, 2021) — A magnificent collection of United States large cents dating back to the earliest years of the U.S. Mint will be on display this week at the Long Beach Expo in Long Beach, California, September 30 through October 2, 2021. The Walter J. Husak Collection of Large Cents, 1793-1814 contains 87 vintage large cents, all graded and encapsulated by Professional Coin Grading Service (PCGS). It includes some of the rarest and finest examples of these old copper coins known.

A coin collector for more than 65 years, Husak previously built one of the most complete collections of early American large cents before selling it in 2008 for $10.7 million. The 87 large cents featured at the Long Beach Expo form the nucleus of a new collection he is working on, something he is doing for “the thrill of the chase,” as Husak remarks.

“The varieties of these coins — the Sheldons — they are nothing but the best,” he says, referencing the hundreds of large cent varieties famously catalogued by 20th-century coin expert Dr. William Herbert Sheldon. “I want to collect them all, and I hope this display inspires other collectors to go out and pursue what the coins they want, whether they be large cents, Standing Liberty quarters, Morgan dollars, or something else.” His Liberty Cap Foundation serves as a stunning museum of early American coins.

Husak has discovered building this second set of early American coppers is different from completing his first. “It’s harder the second time around,” remarks Husak. “More people know about these varieties now and how rare so many of them are. Some of these coins have pedigrees going back to 1843, when American numismatics was in its infancy.”

Professional Coin Grading Service (PCGS) is a third-party coin and banknote grading company that was launched in 1986. Over 35 years, PCGS has examined and certified more than 47 million U.S. and world coins, medals, and tokens with a combined value of over $46 billion. For more information about PCGS products and services, including how to submit your coins for authentication and grading, please click here or call PCGS Customer Service at (800) 447-8848.