I have seen the following Craigslist ad appear in the local listings a handful of times over the course of a few months:

Also have the following coins:

Want to sell as one lot.

Last week, I decided to run the numbers, and by my rough estimates, his requested price of $300 fell between the Blue Book value of what dealers would pay for them, and the Red Book value of the price at which dealers would sell them. In addition, I checked my own collection against the specific coins listed, and discovered that I needed quite a few of them. With all of this in mind, I responded to the ad, and asked if they were still available, and if the entire collection was included in the $300 price, and if both were ‘yes’, I said that I would be willing to pay that price. He replied that they were available, and we began to arrange for a face-to-face meeting to complete the transaction.

At our meeting, I found out more about his motivations to sell the coins: divorce in progress, recently unemployed, and just this week, having to put down a long-time canine companion. This crystallized in my mind why I stopped trying to get the best deal possible, and pledged to at the minimum give the seller what they are offering; if I felt that it wasn’t a fair offer, I would simply not throw my hat into the ring. He had described how two coin dealers had given him offers at half his asking price, which he flatly refused to entertain. I can understand a brick-and-mortar store needing to purchase at rock-bottom prices to allow for their overhead, but that offer seemed disrespectful: even the Blue Book numbers would peg the collection in the $225 range. After a short conversation about other coin collecting and precious metal investing we had done, he gave me his coins, I gave him my $300, and we parted ways. 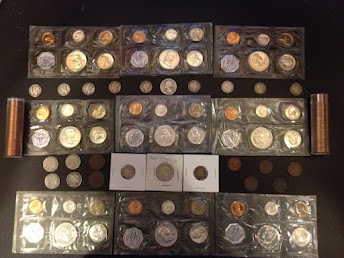 The coins were exactly as advertised. It turned out the “original mint packaging” for the proof sets just referred to the plastic, not the envelopes, but that is fine, as I am more concerned about the coins than the paper envelopes. The loose coins were in conditions that matched what he had written, within a reasonable person’s assessment of their condition, and the two rolls of cents were in spectacular condition, certainly uncirculated. Last night, I performed a detailed price calculation, by averaging the Red Book and Blue Book values. I started with the proof sets and worked through the loose coins by denomination, and by the time I reached the rolls and the bag of wheat cents, the total value exceeded $300. Are the average prices a good measure of their worth? That is debatable, but having the sum cross just over the purchase price gave me the confidence I had not paid too much, nor paid too little, for the collection. I am very happy I made this purchase, as it fills many holes in my collection, and the handful of duplicates will likely make someone else happy as well.