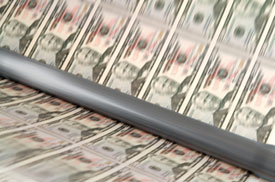 I have a couple of apologies for my readers.  There have been some valuable comments posted to some of my recent columns that let me know that I didn’t do as thorough a job of explaining context and providing background on some issues.  My proofreaders often get on me about the same issues, but there is no perfect solution, given the constraints of this column.  Often my earlier drafts of columns have to be revised as I assumed more understanding of terminology and background than the proofreaders felt was warranted.  They have also sometimes asked me to change the tone to avoid talking down to my readership.

It appears that I have not done an adequate job of providing definitions for some of the technical terms I use.  I had incorrectly assumed that my generally sophisticated readers understood the real definition of inflation, and not the incorrect definition of inflation as used by most politicians and those with more limited understanding of economics.  I have also not explained my background so that readers realize that I am not a “gold bug.”

Perhaps the problem over too much versus too little detail started back in my sophomore year in college when I took a course in microeconomics.  I wrote a term paper on monopoly, of which about half the text involved defining a long list of terms.  Although I earned a top grade on the paper, my teaching fellow complained that I spent too much time on definitions.  The extensive list of definitions actually helped me pin down exactly what I was talking about and clarify my thoughts, but it was obviously tedious to a reader well-versed in economics.  The lesson I learned from the experience was to try to write to the competence level of who would be reading my thoughts.

Another experience from college (I attended the University of Michigan in Ann Arbor) that has stayed with me was a presentation made during my senior year by Marina von Neumann Whitman, who was then serving on President Nixon’s Council of Economic Advisers. (In 1992, Professor von Neumann Whitman joined the Michigan business school faculty, where she remains today).   She accepted written questions from the audience after her speech.  I was fortunate that she read and discussed my question.

My question was something along the lines of “What would happen to other world currencies if a nation were to establish as its own currency, one defined strictly by the weight and purity of gold and silver?”  The reason I asked the question is that there was an effort at the time to establish a free-market nation in the south Pacific at the Minerva Reefs, where there was a significant prospect that the monetary system would be based on weights and purities of gold and silver.

Von Neumann Whitman’s answer was roughly, “First, it will never happen.  No nation would ever establish a monetary system strictly based on the weight and purity of gold and silver.  The political upheaval following such a step would topple any politicians foolish enough to try to do so.”   But then she went on to say (and I am paraphrasing here), “However, if any such monetary system were ever established and sustained in any country, it would cause all other world currencies to fail.”

What was not explained in the response is the reason why all other currencies would fail.  I consider the answer obvious and believe that most of my readers also understand, but let me be explicit to avoid any confusion.  A currency of a fixed value that politicians literally cannot tinker with under any political pretext will be honest money.  It will not be subject to any open or secret government’s actions that might (almost always) reduce its value.  Such a currency would not depend on “the full faith and credit” of the issuing government.  Instead, the currency itself would represent value.  A currency of absolute fixed value would have an extreme competitive advantage over any other global currencies that were subject to being destroyed by politicians.  It would become the medium of exchange of choice worldwide, meaning that other currencies would have to match the standard or effectively fail.

But, in order to match a strict gold and silver standard, politicians would have to give up all, and I mean all, government control of the currency.  Unfortunately, I think there are very few politicians sophisticated enough to understand the concept of sound money (with the exception of Rep. Ron Paul [R-TX] and a few others), and perhaps even fewer would have the political backbone to support a move to sound money.

Gold and, to a lesser extent, silver have a 6,000 year track record of never failing as money.  Where the use of gold or silver as part of a monetary system has failed, the problem had to do with the politicians trying to assign a fixed monetary value to a weight and purity of the metal, and then changing the definition of the fixed monetary value.  A prime example occurred in 1933 where the US government had previously defined a troy ounce of gold as equal to $20.67 in US dollars, then changed the fixed value to $35.00 per troy ounce of gold.  The value of an ounce of gold was still an ounce of gold.  It was only the US dollar value that was changed.

Despite having such a long track record as secure money, I don’t automatically advocate that gold (or silver) be established as the base for a monetary system.  It is possible something else would prove to be much more suitable as a medium of exchange and store of value in the context of today’s technological capability.  I am therefore an advocate of a free market system, where all governments stay out of the business of defining monetary values.  If this were actually to occur, I suspect that weights and purities of gold would tend to be the first successful form of global money–because of its long successful track record.  However, gold would still have to compete against any other possible form of money.  My imagination can conceive of potential competitors like units of energy or computing power.

One of the constraints of writing this column is that of time and space.  It takes time to write this column, time that competes with every thing else I am doing or could be doing.  Further, one of the features of this column is to try to share some insights in a relatively brief format, so that it does not require a major investment of the reader’s time to digest.  So, I will periodically return to some of the issues that readers have raised (and I thank you for that as the feedback helps me to focus my own thinking), but in relatively short tidbits.

However, before I finish this particular essay, let me review the definition of inflation.  Inflation is the increase in the money supply, period.  It has nothing to do with changes in price levels.  Rising prices tend to be a result of the act of inflation, but is not itself inflation.  Politicians and some economists try to disguise this basic definition by discussing price changes as if that were inflation.  By pretending to address what is the result of inflation, politicians can claim to be doing something about the problem while actually not addressing inflation at all.  To really address the issue of rising prices would mean first getting rid of inflation, which is absolutely what politicians do not want to do.

Actually, in my mind, with the constant technological advances and greater efficiencies in business operations, I would expect prices to be declining every single year if the money supply were stable.  It would fluctuate over time, but I think and annual average price level decrease of 3-10% per year would be typical.  By my way of thinking, that means that even stable price levels really indicate inflation that is causing higher prices!  So, when politicians and economists proclaim that there is no inflation or that inflation is under control, they are being doubly misleading.  First, they are talking about the change in price levels rather than inflation.  Second, they are referring to modest increases of price levels as a sign of a healthy economy, when it is really much worse when measured against the standard where prices should generally be falling.

Without going through the intermediate analysis, which I will cover in more depth at another time, inflation—governments’ expansion of money supplies—is the cause for rising prices (or at least the failure of prices to fall) and perhaps the main reason that a growing number of people are trying to protect themselves through ownership of gold and silver.

Message for new readers: All of Patrick Heller’s precious metals commentary for Coin Update can be found at http://news.coinupdate.com/author/path