Coins can be rare because the mintage is low, as in an 1894 Morgan dollar at 110,000. Or can be valuable because a specific year is rare in mint state, such as an 1884-S Morgan whose mintage is 3.2 million. More than a million of those were melted after the 1918 Pittman Act, and the surviving ones just didn’t contain many uncirculated examples.

In my work as a numismatic writer and blogger, I often am asked to grade condition rarity via digital photography, without examining the item in my hand (apart from the keyboard). Usually I turn down such requests because my judgment may differ from that of a slabbing company, and then email complaints and demurs start to fly if my assessment differs.

Occasionally I will make exceptions, as I did for an auctioneer who specializes in excellent photography and who sells coins via the online portal Proxibid.

As such, this was an interesting case for me to take on when the auctioneer described the coin: “Here are some photos of the 84-S. Mirrored fields have some minor scratches; doesn’t appeared to have been cleaned. Owner thinks it is MS60/62. It has some definite DMPL [deep mirror prooflike] qualities but sometimes that makes a coin look worse than it actually is. As you know an AU58 to MS60 is a big jump. Any input would be greatly appreciated.”

Click on and expand the photos accompanying this post. You’ll see in the first photo how I test for mint state. Many numismatists go for eagle breast feathers on the reverse, but my telling point is the hair above the ear on the obverse. That’s how I can distinguish a slider (AU58, noticeable wear) from mint state (MS60 and above, little if any wear). 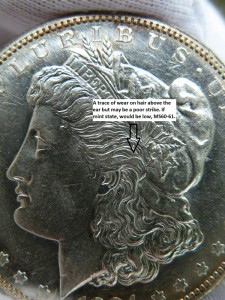 The next photo provides a straight-on shot of the obverse, and there are disturbing lines in different directions at various points in the fields, especially to the left of the profile. The coin may be cleaned. If not, it may be damaged in the cheek area or worse, tooled. I just can’t tell from the photo. 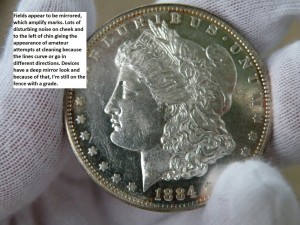 I wrote the auctioneer, “Look with a loupe to see if you discern uniform hairlines indicating tooling.I’m hoping those are album slide marks and not circulation marks or a poor attempt at altered surfaces.”

The next photo shows mirrored fields. Such a coin’s surface must reflect at least 4 inches away from newsprint to be designated deep mirror prooflike. This seems to show that. However, with top grading companies, the devices have to be frosted and distinct from the fields. This doesn’t seem to have that quality. 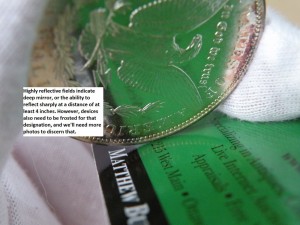 Now go to the last photo here, a straight-on shot of the reverse. 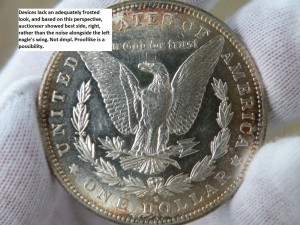 The owner, who believes the coin to be MS60-62 DMPL, is typically looking on the bright side–literally. The left field is heavily marked, disqualifying the coin, unless the picture is faulty (I think not). The coin does have some deep-mirror properties (obverse field and devices, reverse fields–but not devices). There is too much noise for this to be DMPL, too. There’s a chance of this being labeled proof-like, if the cheek isn’t tooled.

If altered, the coin is a show piece for an album worth about $400 because of the mirrored fields.

My conclusion? There is too much noise on the obverse cheek and around the cheek to the extent that this will not slab at PCGS or NGC. Because 1884-S coins with this much going for it are exceedingly rare, there would be a better chance that this will slab at ANACS or ICG, although that is very doubtful as well. Slabbing by third- and bottom-tier companies is a telltale sign in numismatic circles that the coin didn’t pass muster at first- and second-tier grading companies.

If sent to PCGS, whose standards I know best, my guess would be “Genuine, altered surfaces.” At NGC, my guess would be “Improperly cleaned, AU55.” But this is only as judged through a camera’s lens. If analyzed with a loop in person, the coin may turn out to be low mint state, prooflike. Or worse: obviously doctored.

Here’s what I proposed to the auctioneer: “Tell the owner that you need to send this to PCGS. It’s worth the money to see how this will slab, if at all. Potentially, this coin may be a $400 or $7500 piece given the spread of those grades. I’d say chances are better than a lottery ticket.”

The auctioneer liked that advice and is planning to submit the coin for grading. What is YOUR assessment?