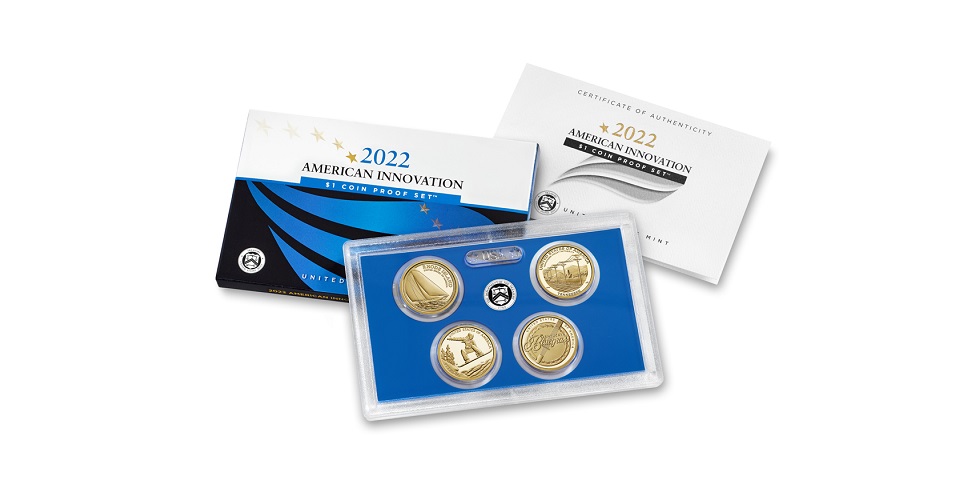 Washington — The United States Mint (Mint) will begin accepting orders for the 2022 American Innovation $1 Coin Proof Set on June 7 at noon EDT. The set is priced at $24.00 (product code 22GA).

The American Innovation $1 Coin Program is a multi-year series featuring coins with distinctive reverse (tails) designs that celebrate America’s ingenuity and the pioneering efforts of individuals or groups from all 50 states, the District of Columbia, and the U.S. territories. The 2022 American Innovation $1 Coin Proof Set includes coins honoring innovations from Rhode Island, Vermont, Kentucky, and Tennessee. Designs for these coins were created by United States Mint Artistic Infusion Program (AIP) Designers and sculpted by United States Mint Medallic Artists. Descriptions of the coins are below. 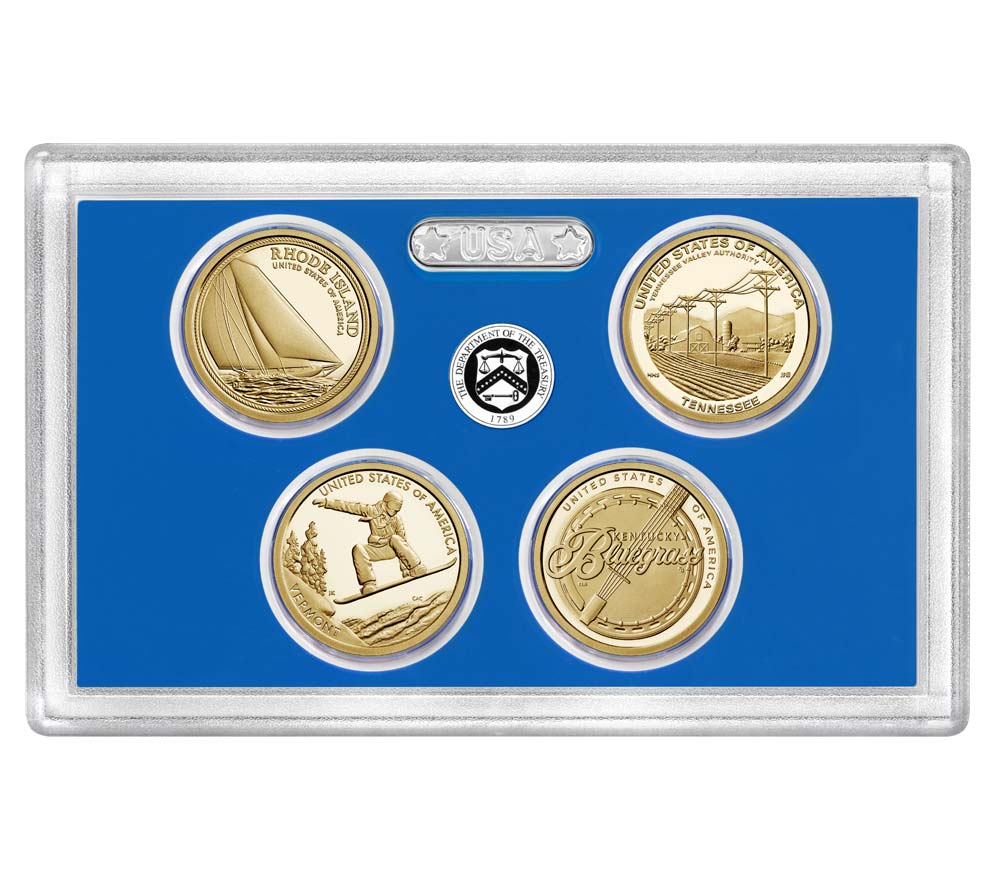 Vermont – This design features a young snowboarder in the air performing a trick called a “melon grab,” set against a mountainous winter skyline inspired by the landscape of Vermont. The aim of the design is to capture a sense of the energy and exuberance of snowboarding through movement implied by diagonal lines and curved shapes. Inscriptions are “UNITED STATES OF AMERICA” and “VERMONT.” AIP Designer Justin Kunz created the design, which was sculpted by Medallic Artist Craig Campbell.

Kentucky – This design features a banjo, an important bluegrass instrument, tilted to one side, alluding to the rhythm and movement of the music. Inscriptions are “UNITED STATES OF AMERICA,” “BLUEGRASS,” and “KENTUCKY.” The design was created by AIP Designer Christina Hess and sculpted by Medallic Artist Renata Gordon. 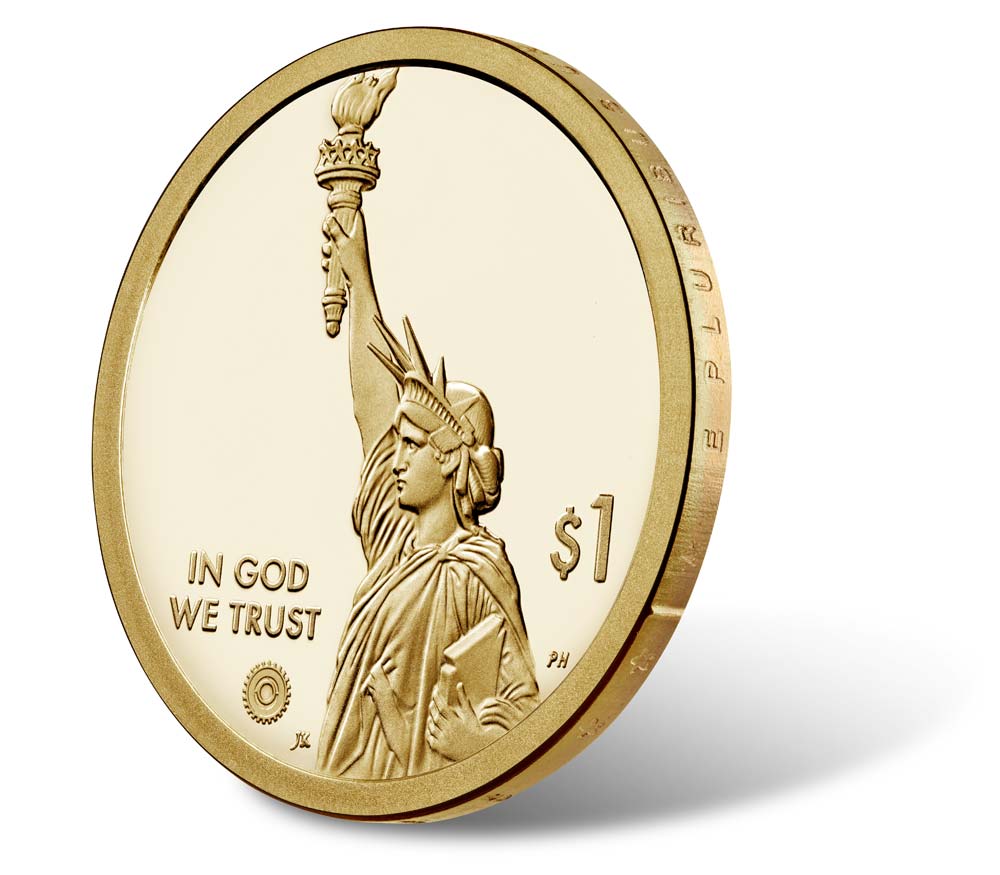 The obverse (heads) of all American Innovation $1 coins depicts a dramatic representation of the Statue of Liberty in profile with the inscriptions “IN GOD WE TRUST” and “$1.” The design also includes a privy mark of a stylized gear, representing industry and innovation, which changes every year of the program. The inscriptions “2022,” “S” mint mark, and “E PLURIBUS UNUM” are incused on the coins’ edge. AIP Designer Justin Kunz created the design, which Medallic Artist Phebe Hemphill sculpted. All coins in the set were struck at the Mint’s San Francisco facility. A certificate of authenticity is included in the packaging. 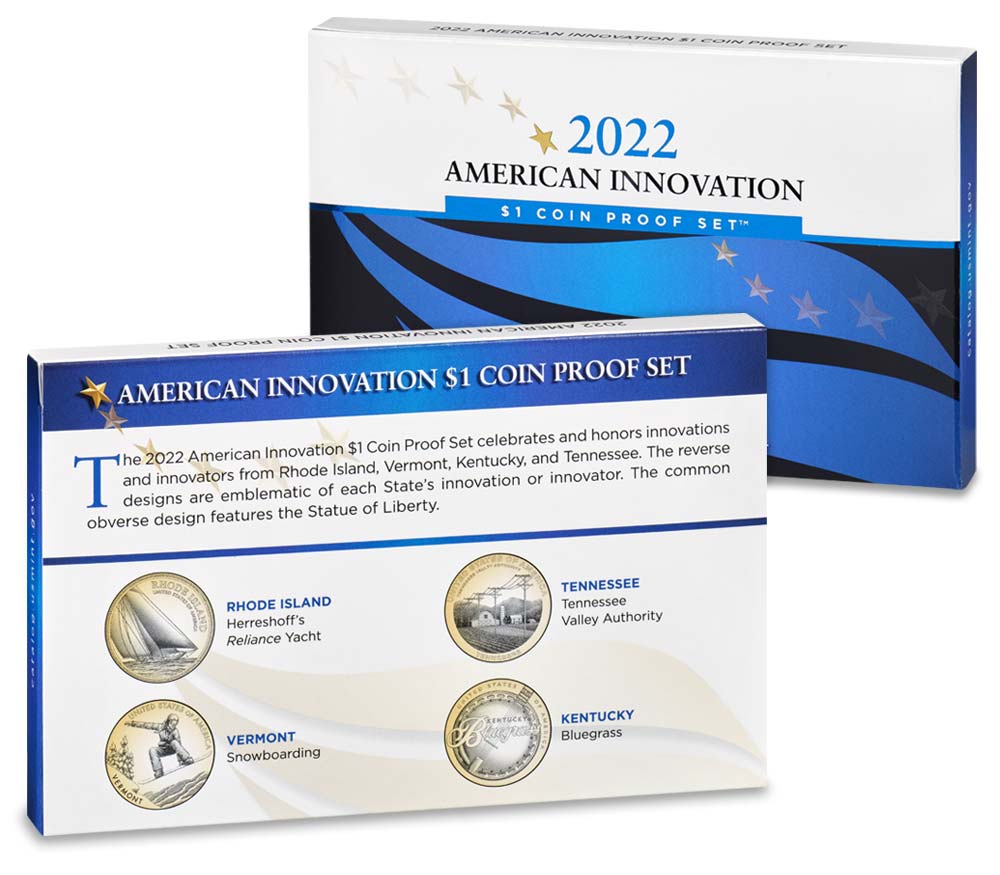 To sign up for a REMIND ME alert, please visit here. The American Innovation $1 Coin Proof Sets are included in the Mint’s Product Enrollment Program. Structured like a magazine subscription, this program affords customers the convenience of signing up to receive automatic shipments of products in a series. The shipments continue until the enrollment is canceled. For details, click here.

ABOUT THE UNITED STATES MINT

Note: To ensure that all members of the public have fair and equal access to United States Mint products, the United States Mint will not accept nor honor orders placed prior to the official on-sale date of June 7, 2022, at noon EDT.