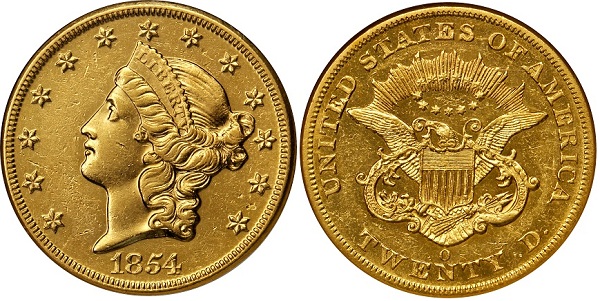 Recovered from the SS Republic and tied for finest known, this rare 1854-O Double Eagle, graded NGC AU 58, is one of the highlights of the $8 million Horseneck Collection of Type I Double Eagles that will be exhibited in public for the first time by the set’s anonymous owner and Monaco Rare Coins at the ANA 2016 Anaheim World’s Fair of Money. Photos by Stack’s Bowers Galleries.

The following press release was shared by Monaco Rare Coins in cooperation with the American Numismatic Association:

(Anaheim, California) – The first public display of a 46-coin set of Type I Double Eagle U.S. $20 denomination gold coins will be one of the featured highlights of the Museum Showcase at the American Numismatic Association 2016 Anaheim World’s Fair of Money®, August 9 – 13, 2016. Known as the Horseneck Collection, the set required 14 years to assemble and now is insured for $8 million for its public debut at the ANA convention.

This exhibit is courtesy of Monaco Rare Coins of Newport Beach, California and an anonymous East Coast collector who owns the remarkable coins. The owner began collecting coins as a child in the 1950s when he became fascinated by 1830s and 1840s era quarters and half dollars his grandfather had accumulated while working as a bank teller in the 1890s.

“The Horseneck Collection set includes many finest known or tied for finest known Type I Double Eagles that were struck from 1850 to 1866. Many of the coins were made from California Gold Rush ore, and a dozen were recovered from famous shipwrecks: the 1857 sinking of the fabled ‘ship of gold,’ the Central America; the 1865 wreck of the Republic; and the 1865 sinking of the Brother Jonathan,” said Adam Crum, Monaco Vice President. 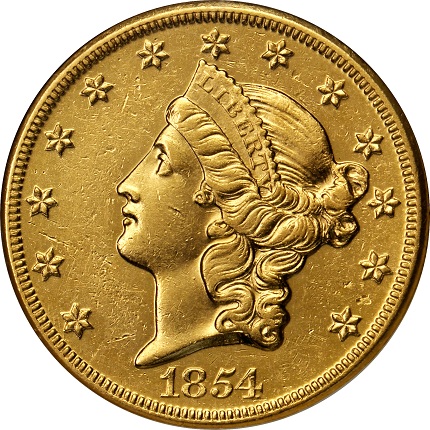 “It is collections like this and the support of organizations like Monaco Rare Coins that make the ANA Museum Showcase a centerpiece and must-see event at each of our shows,” stated Douglas Mudd, ANA Money Museum Curator.

“The large, Type I Double Eagles convey the history and intrigue which is so important for a coin to be desirable,” said Crum who is co-author of “An Insider’s Guide to Collecting Type I Double Eagles,” and is completing work on a new reference book, “America’s First $20 Gold Coins.”

“If not for the California Gold Rush, we most likely would not have had these wonderful treasures to enjoy today. They were minted in an era that defined our borders, saw us flourish economically and finally saw us fall to the lows of humanity with a four year Civil War that ravaged our nation,” Crum explained. 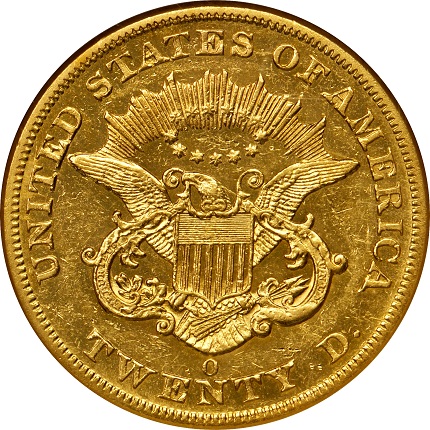 The owner of the Horseneck Collection said he began collecting Type I Double Eagles in 2002 after purchasing an 1857-S from Monaco that was a recovered from the Central America shipwreck.

“It wasn’t long before I embarked on collecting the entire set of Type I Double Eagles. Their history is fascinating: a denomination born in the California Gold Rush and spanning the Civil War! My set includes a number of pieces from treasure ships, each with its own unique story and impact on the history of the era,” the set’s owner stated.

“I am fascinated by the New Orleans ‘O’ Mint coins with such incredibly low mintage figures. I think my favorite is my 1854-O, which is both one of the scarcest dates in the set and the only specimen of this date recovered from a shipwreck (the Republic),” he explained.

“Over the years I have attempted to build the highest graded set I could. It was pretty easy to get started with treasure ship coins which sat on the bottom of the ocean for 150 years. But I quickly discovered how few mint state coins existed in dates not preserved by shipwrecks. It seems that no one collected Double Eagles back in those days and they apparently were only used in commerce.” That coupled with the big gold melt-down of 1933 has made assembling my set especially challenging. And I’ve loved every minute of it!,” he emphasized.

The Horseneck Collection of Type I Double Eagles will be displayed in the ANA Museum Showcase (booth area #1000) in Hall D of the Anaheim Convention Center, site of the ANA World’s Fair of Money.

“These coins stir my imagination when I hold one in my hand, but when you get to see so many at one time in such a high state of preservation, such as these in the Horseneck Collection, it just brings so much history alive. I guess that is why there are seven different Type I Double Eagles listed in the book, “100 Greatest United States Coins.” That’s more than any other series in all of U.S. numismatics,” said Crum.

For additional information about the exhibit of the Horseneck Collection of Type I Double Eagles, contact Adam Crum at Monaco Rare Coins at (888) 900-9948.