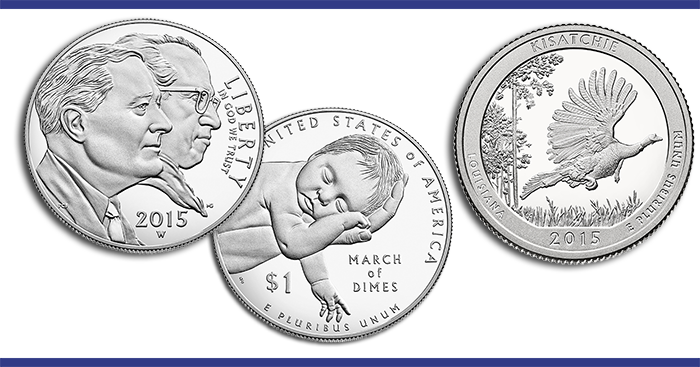 The United States recently earned top honors in two coin-design categories at the World Money Fair in Berlin, Germany. United States Mint officials accepted two Coin of the Year (COTY) Awards on behalf of the nation. The U.S. won in the category of Best Circulating Coin for its America the Beautiful Program quarter honoring Kisatchie National Forest, and in the category of Most Inspirational Coin for its March of Dimes silver dollar commemorative coin. (We didn’t pick all of the COTY winners, but on World Mint News Blog, we did include these two in our prospects. To see our picks for all the awards, and for a link to all the competing designs, click here.)

“The designers, sculptors, and engravers of the Mint comprise the very best talent in the numismatic industry,” said David Motl, acting principal deputy director of the Mint. “Artists are an indispensable part of the coin-production process and the Mint congratulates them on this well-deserved recognition.”

The March of Dimes silver dollar, which celebrates the 75th anniversary of the establishment of the March of Dimes Foundation, includes a reverse that was designed and sculpted by sculptor-engraver Don Everhart. The obverse features the profiles of President Franklin D. Roosevelt and Dr. Jonas Salk, two leaders in the fight against polio. It was designed by Artistic Infusion Program (AIP) artist Paul Balan and sculpted by Mint sculptor-engraver Michael Gaudioso.

In the early 1950s, the average number of polio cases each year in the United States was 20,000. In 1952, that number spiked to 58,000 cases; that same year, Dr. Jonas Salk announced that he had developed a vaccine against the terrible disease. Trials were soon underway, and the success of the vaccine was finally declared on April 12, 1955—the 10th anniversary of the death of America’s most famous polio victim, President Franklin D. Roosevelt. Over time, the vaccine has been continually improved, and in 2015, there were only 74 reported cases worldwide. In the short video below, Dr. Salk is asked whether he would consider patenting the polio vaccine:

The America the Beautiful Program quarter honoring Kisatchie National Forest features a wild turkey in flight over bluestem grass with long-leaf pines in the background on the reverse. The design was created by AIP artist Susan Gamble and sculpted by Mint sculptor-engraver Joseph Menna. With more than 604,000 acres of bayous, bald-cypress groves, and old-growth pine trees spread across seven parishes, Kisatchie is Louisiana’s only national forest.

The COTY Awards recognize artistic talent among 10 design categories. A panel of international judges selects from coins issued two years prior to the year of the award. Both of the coins were issued in 2015 and are no longer available from the Mint.   ❑

This post is based on a press release from the United States Mint.