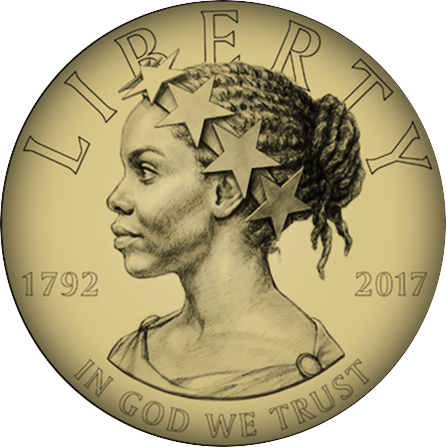 Last Friday (September 16), the Citizens Coinage Advisory Committee (CCAC) held its scheduled meeting at the United States Mint in Washington, D.C. On the agenda were the candidate designs for the 2018-2020 American Eagle Platinum Proof Program “Life, Liberty, and the Pursuit of Happiness,” as well as the election of jurors for the Breast Cancer Awareness Commemorative Coin Design Competition. Members of the public were invited to attend the open session of the meeting.

According to a report by Paul Gilkes of Coin World, the closed, administrative portion of the meeting included a discussion of the Mint’s 225th anniversary coin, complete with the examination of a test strike. The final design selection is still under wraps; however, according to the Coin World report, a Mint flyer confirms that the chosen obverse design is the one recommended by both the Commission of Fine Arts and the CCAC in March. At center is a left-facing bust of an African American woman wearing a coronet of stars, with the word LIBERTY above, the national motto below, and the dual dates 1792 and 2017. An angled view of the coin reveals its strong relief, along with the edge lettered ✭ 225TH ANNIVERSARY ✭.

“A goal of the Citizens Coinage Advisory Committee has been to encourage the use of symbolic artwork in U.S. coinage, instead of simply ‘storyboards’ or static snapshots of history. If any readers of CoinUpdate have ideas about how the Mint can celebrate its 225th anniversary, whether within the hobby community or out in the mainstream, they can contact me at  or get in touch with other members of the CCAC.”