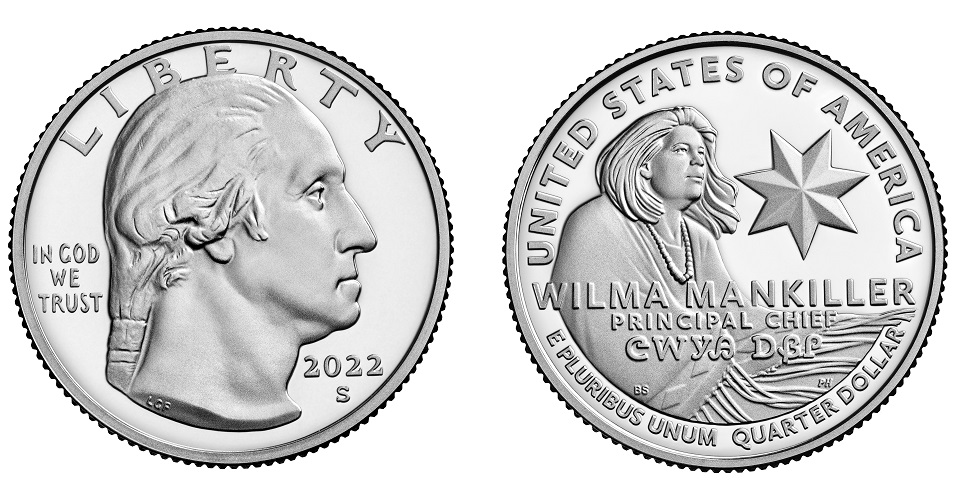 Washington — The United States Mint (Mint) 2022 American Women Quarters rolls and bags — Wilma Mankiller will be available for purchase on June 14 at noon EDT. The Wilma Mankiller quarter is the third coin in the American Women Quarters Program, a four-year program that celebrates the accomplishments and contributions made by women who have shaped our Nation’s history.

The rolls and bags product options include:

Sign up to receive REMIND ME alerts by visiting the official product listing page.

The Wilma Mankiller quarter reverse (tails) depicts her with a resolute gaze to the future. The wind is at her back, and she is wrapped in a traditional shawl. To her left is the seven-pointed star of the Cherokee Nation. Additional inscriptions are “UNITED STATES OF AMERICA,” “E PLURIBUS UNUM,” “QUARTER DOLLAR,” “WILMA MANKILLER,” “PRINCIPAL CHIEF,” and the name of the Cherokee Nation written in the Cherokee syllabary.

Each coin in this series features a common obverse (heads) design depicting a portrait of George Washington. This design was originally composed and sculpted by Laura Gardin Fraser as a candidate entry for the 1932 quarter, which honored the bicentennial of George Washington’s birth. The inscriptions are “LIBERTY,” “IN GOD WE TRUST,” and “2022.”

Products in the American Women Quarters Program can also be purchased through the Mint’s Product Enrollment Program. Enrollments work like a magazine subscription. After you sign up, you will receive the next product released in the series and continue to receive products until you end your enrollment. Visit our enrollments page to learn more.

ABOUT THE UNITED STATES MINT

Please use the United States Mint catalog site as your primary source of the most current information on product and service status or call 1-800-USA-MINT (872-6468).