On April 16, at 9:30 a.m. (EDT), the Citizens Coinage Advisory Committee (CCAC) held the first of two meetings (the second was held April 17 at 10:00 a.m.) to review and discuss designs for upcoming issues by the Mint. Among the coins and medals that were reviewed during this two-day meeting period were the Mayflower 400th Anniversary 24-karat gold coins and silver medals, the 2019 American Innovation $1 coins, and the 2021-2025 American Platinum Eagle Proof Coin Series. Below are the various proposed designs for the 2021-2025 American Platinum Eagle Proof coins and their accompanying descriptions. Let us know in the comments which designs you would choose!

Required obverse inscriptions for the 2021-2025 platinum Proof coin are “Liberty,” “In God We Trust,” “E Pluribus Unum,” and the year of issuance. The reverse design introduced for the 2018-2020 Platinum Proof series, featuring an American eagle, will be the same reverse throughout the 2021-2025 series. 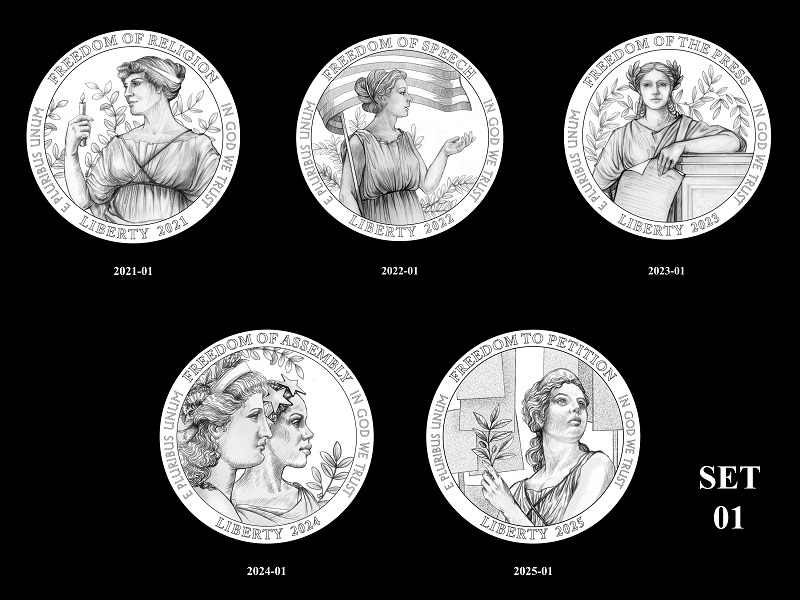 Set 01 is tied together through its use of flora and a traditional Liberty figure. Hover to zoom. 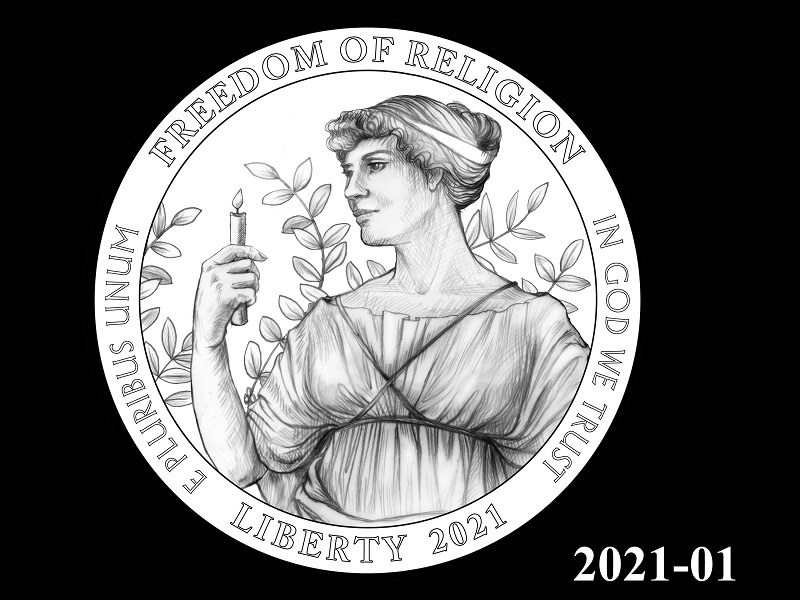 2021-01 features Liberty holding a candle representing faith. The stylized laurel in the background is symbolic of victory and honor. The inscription “FREEDOM OF RELIGION” is included. 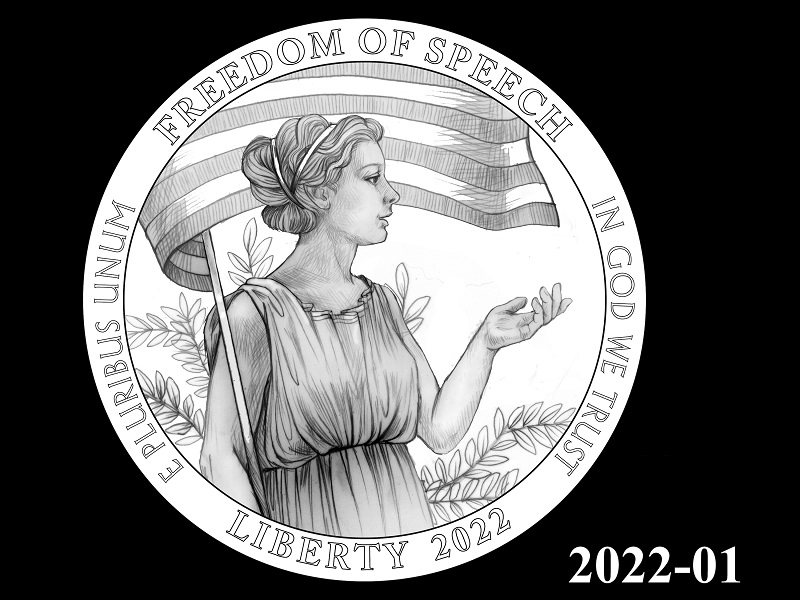 2022-01 depicts Liberty with flag and stylized laurel in the background. The flag represents the Supreme Court’s interpretation of “speech” to include symbolic expression such as the display of a flag. The inscription “FREEDOM OF SPEECH” is included. 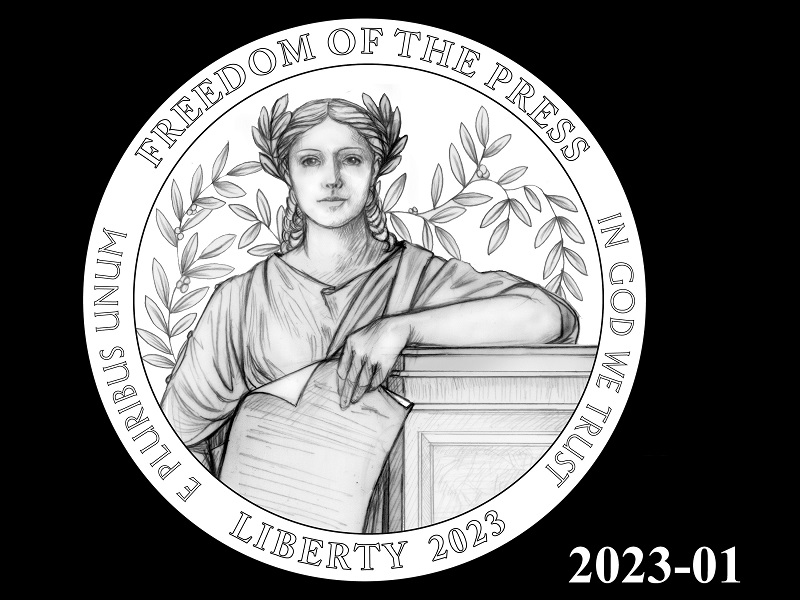 2023-01 portrays Liberty holding a document, symbolic of the press or printed material, with stylized laurel in the background. The inscription “FREEDOM OF THE PRESS” is included. 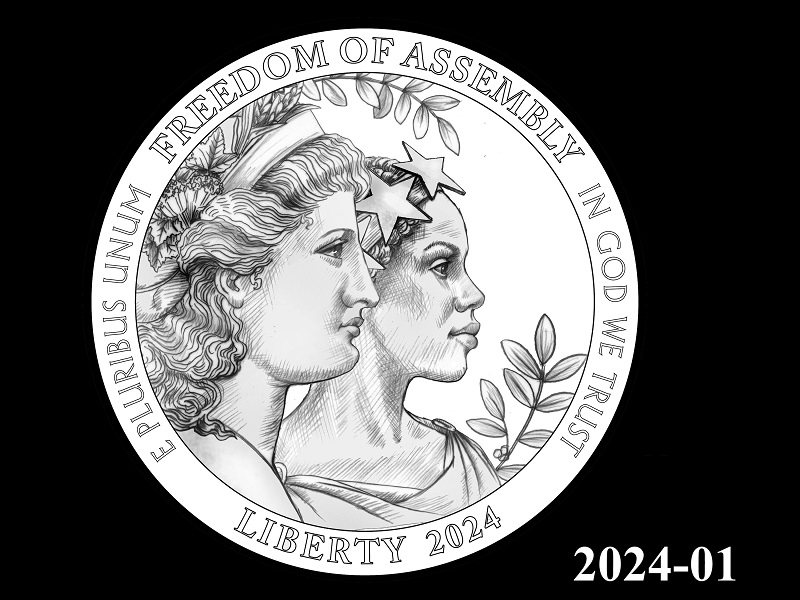 2024-01 features two interpretations of Liberty joined together to represent the right of the people to assemble peaceably. The depictions of Lady Liberty from the Morgan Dollar and the 2017 American Liberty examine the 139 years of history between the two depictions and attribute the success they see to the freedoms guaranteed in our Constitution. The inscription “FREEDOM OF ASSEMBLY” is included. 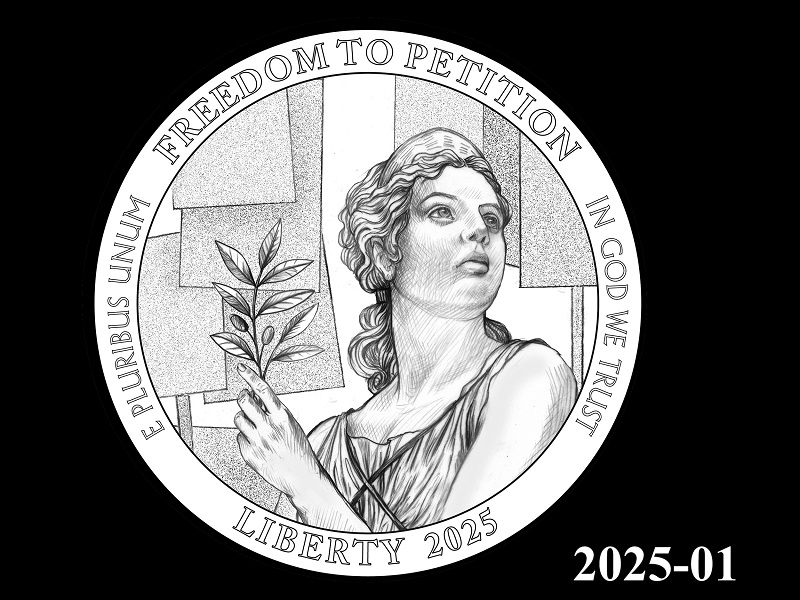 2025-01 depicts Liberty holding an olive branch with placards of petitioners creating a pattern in the background. The olive branch that Liberty holds reminds us of that under our Constitution, it is the right of the people to petition the Government for a redress of grievances without fear of punishment or reprisals. The inscription “FREEDOM TO PETITION” is included. 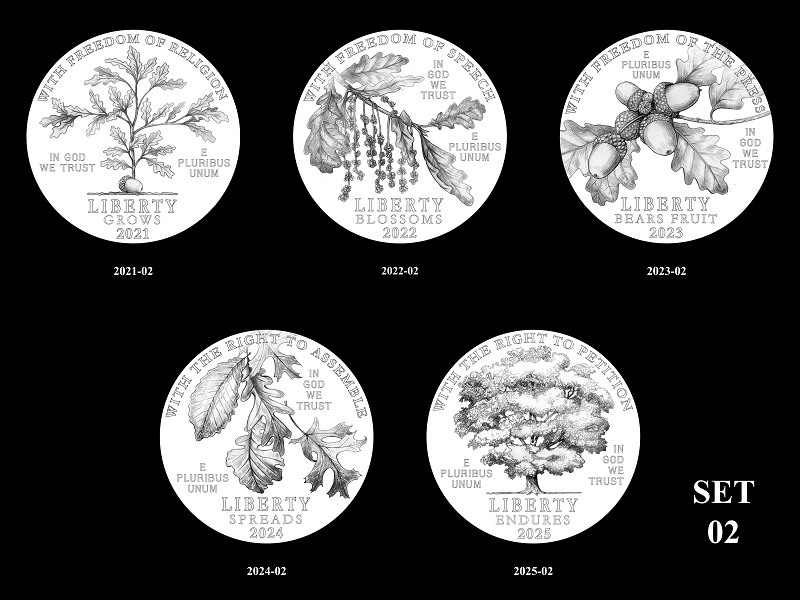 Set 02 uses the lifecycle of the oak tree from seedling to a mighty oak as a metaphor for our country’s growth as a nation that values freedom. Liberty grows to a thing of strength and beauty from a seed – our Bill of Rights. Each of the freedoms enumerated in the First Amendment contributes to the growth and development of the nation. 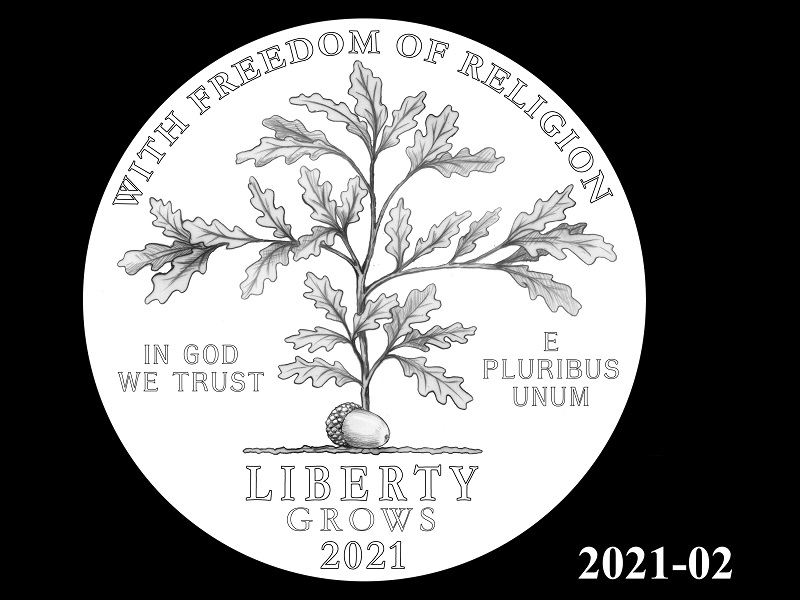 2021-02 depicts a seedling and an acorn surrounded by the inscriptions “WITH FREEDOM OF RELIGION” and “LIBERTY GROWS.” 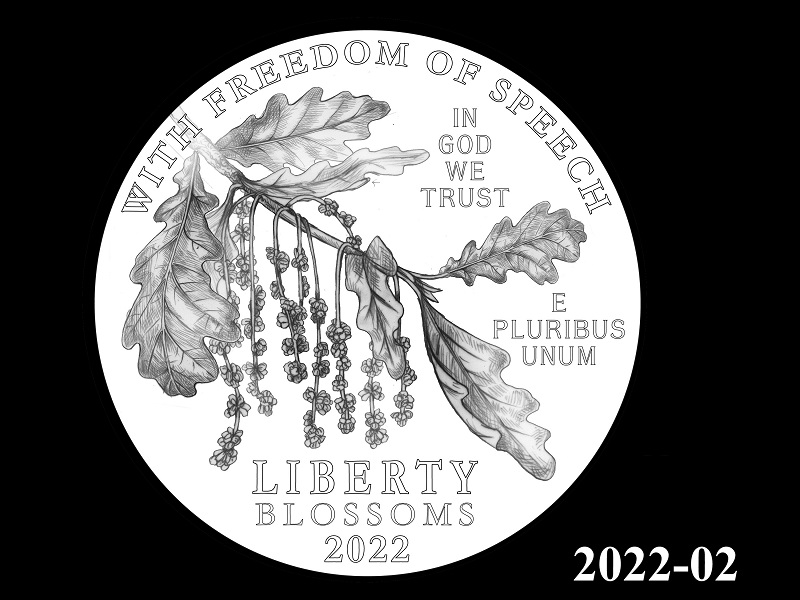 2022-02 features a juvenile oak tree framed with the inscriptions “WITH FREEDOM OF SPEECH” and “LIBERTY BLOSSOMS.” 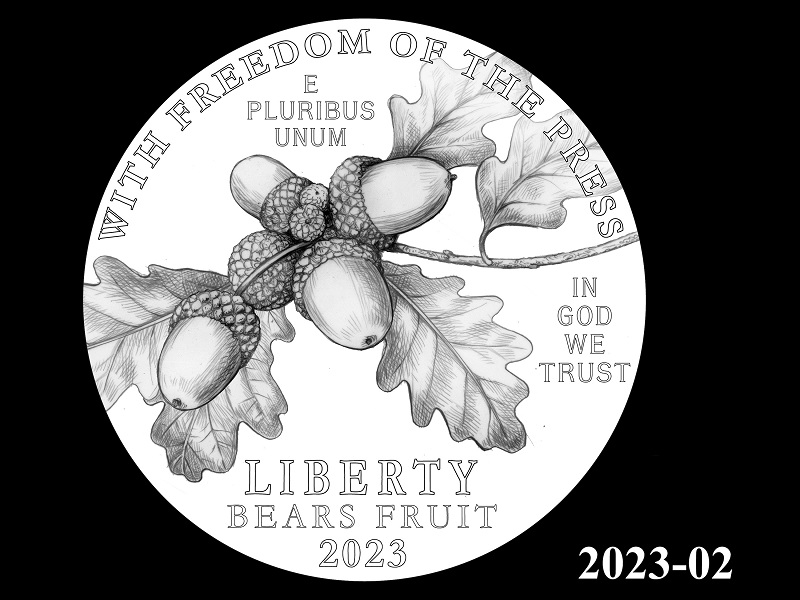 2023-02 portrays the branch of mature oak tree with acorns amid the inscriptions “WITH FREEDOM OF THE PRESS” and “LIBERTY BEARS FRUIT.” 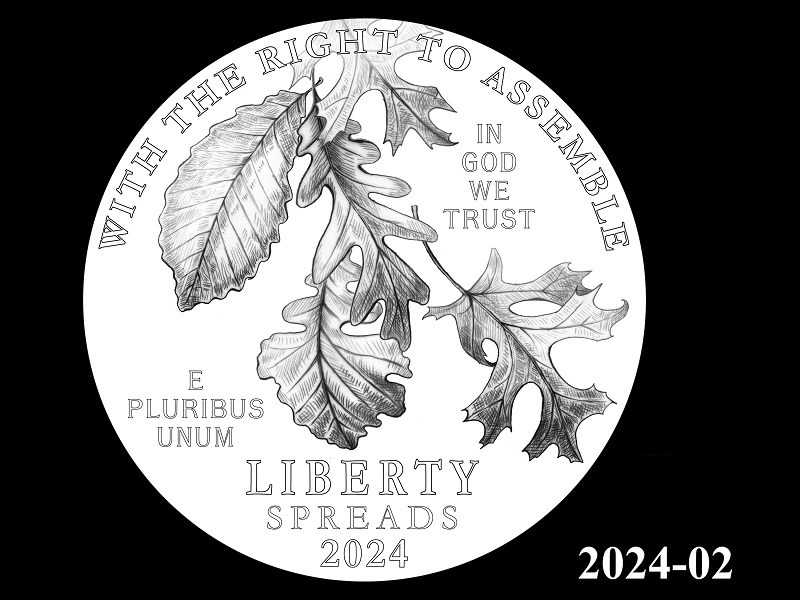 2024-02 showcases several types of oak leaves assembled between the inscriptions “WITH THE RIGHT TO ASSEMBLE” and “LIBERTY SPREADS.” 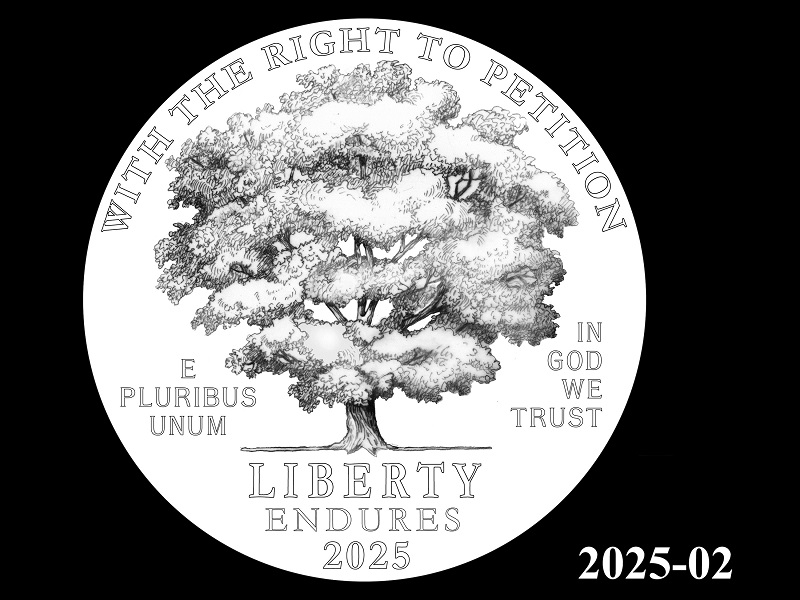 2025-02 features a mature spreading, impressive oak tree between the inscriptions “WITH THE RIGHT TO PETITION” and “LIBERTY ENDURES.” The oak, known for its strength, can live up to 200 years and is a symbol of endurance. 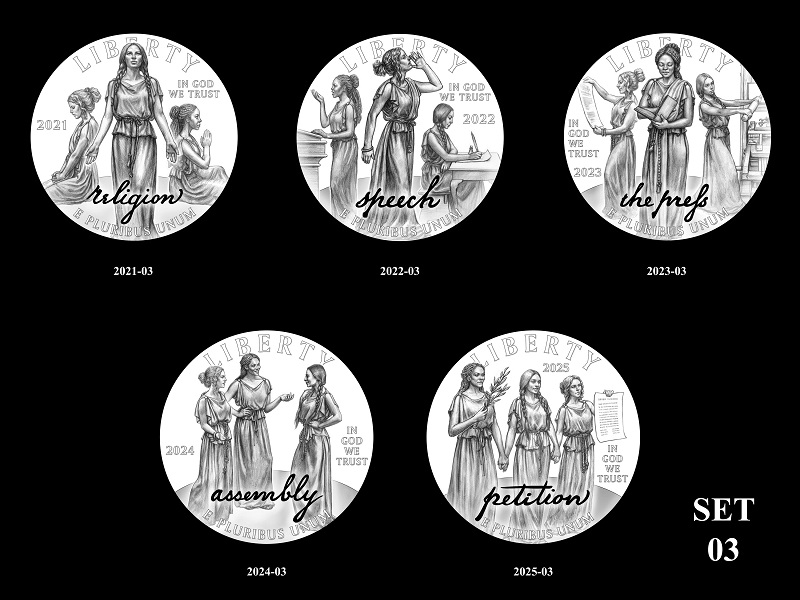 Set 03 features a variety of allegorical figures. Each figure represents different concepts of liberty as expressed through the rights enumerated in the First Amendment. Additionally, the key word from each of the freedoms is inscribed using script modeled after the original text of the Bill of Rights. 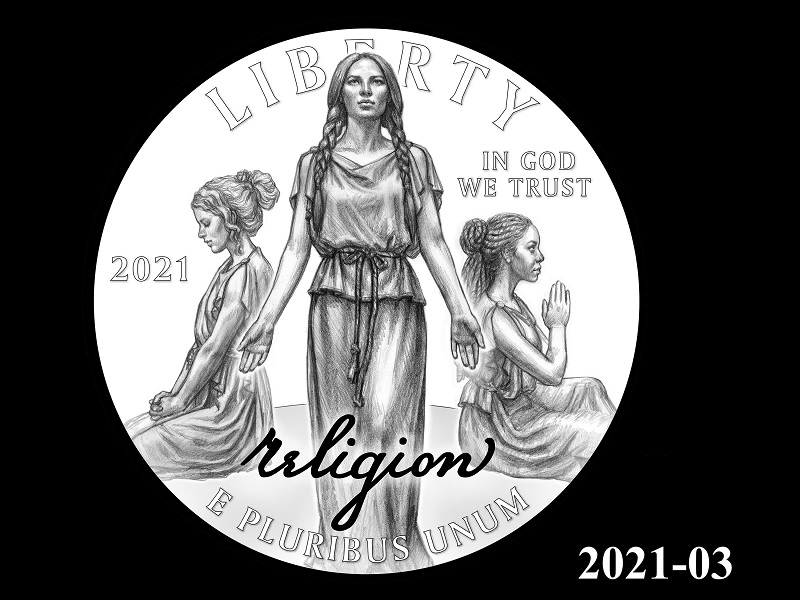 2021-03 shows Liberty in different attitudes or postures of worship, prayer, and meditation, suggesting the diversity of religious practice in America. The inscription “RELIGION” is included. 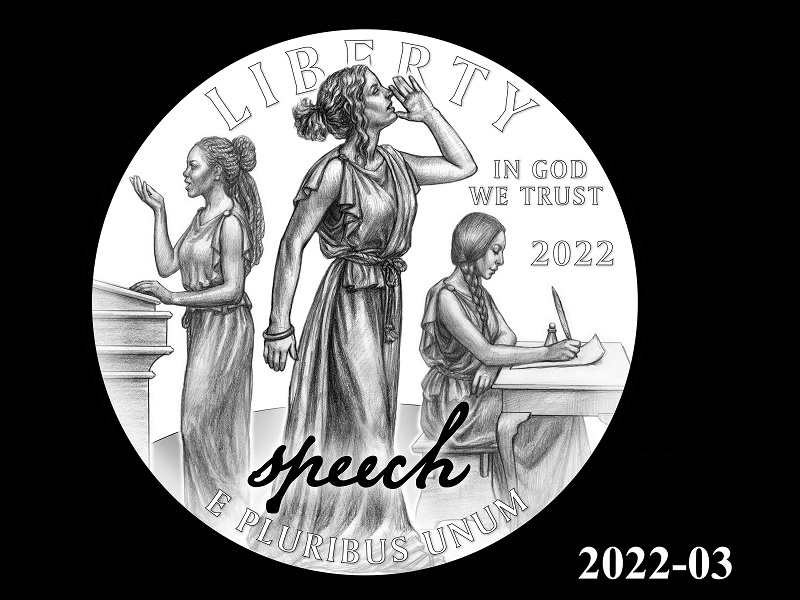 2022-03 portrays Liberty engaged in three basic modes of speech. These simple avenues of expression—writing, formal speaking or lecturing, and raising one’s voice in the public square—are fundamental. The inscription “SPEECH” is included. 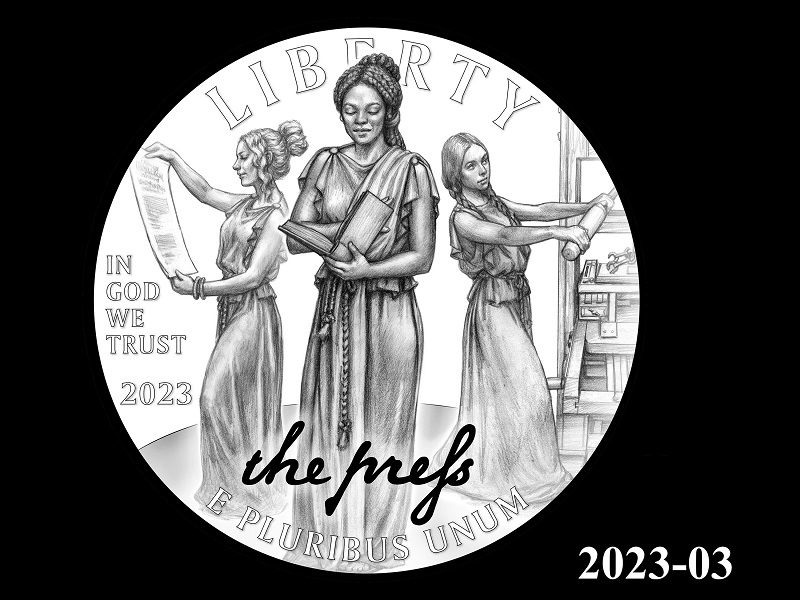 2023-03 shows Liberty busily engaged in publishing and reading printed materials. One reviews a large printed sheet, one reads from a bound book, and a third operates an 18th century printing press. The inscription “THE PRESS” is included. 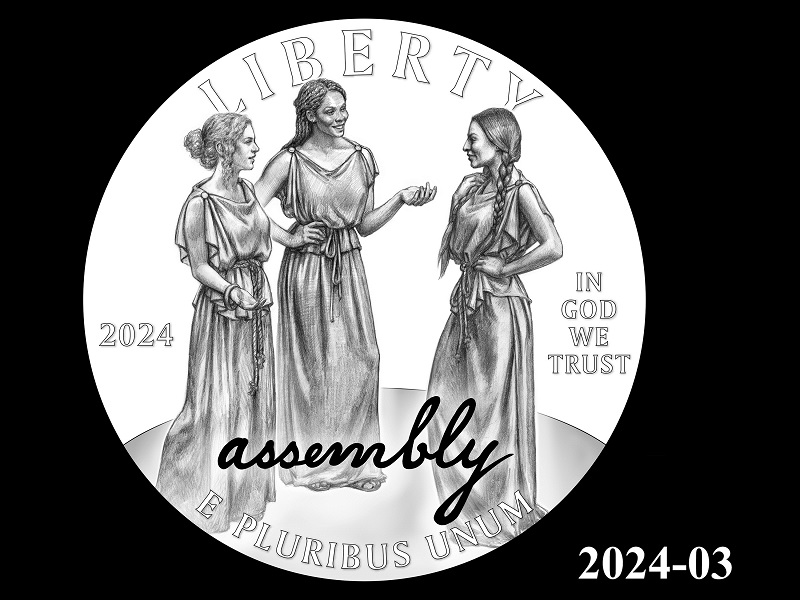 2024-03 features Liberty in different postures of conversation, interaction, and association. Communication is one of the basic foundations of the social fabric that makes up a civilization. The inscription “ASSEMBLY” is included. 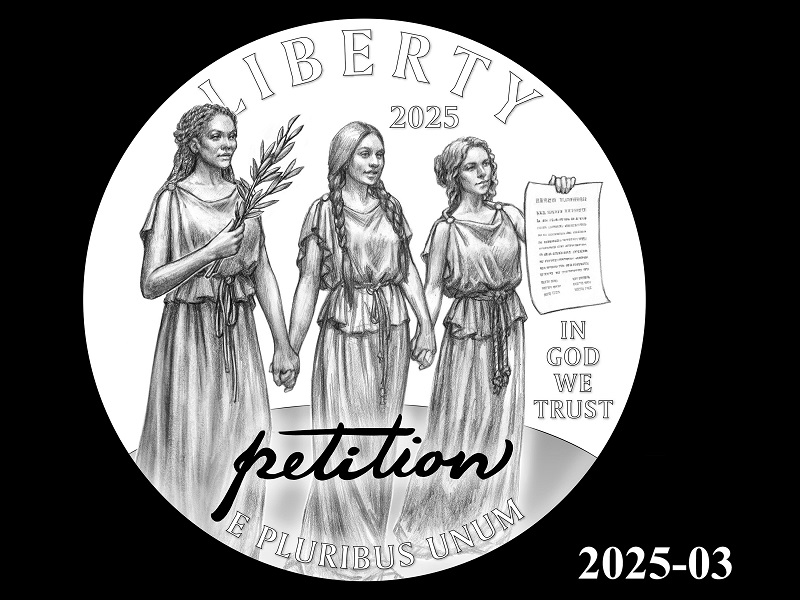 2025-03 portrays Liberty marching hand in hand. One figure displays a petition written on a large sheet of paper, while another holds an olive branch as a symbol of peace. The inscription “PETITION” is included. 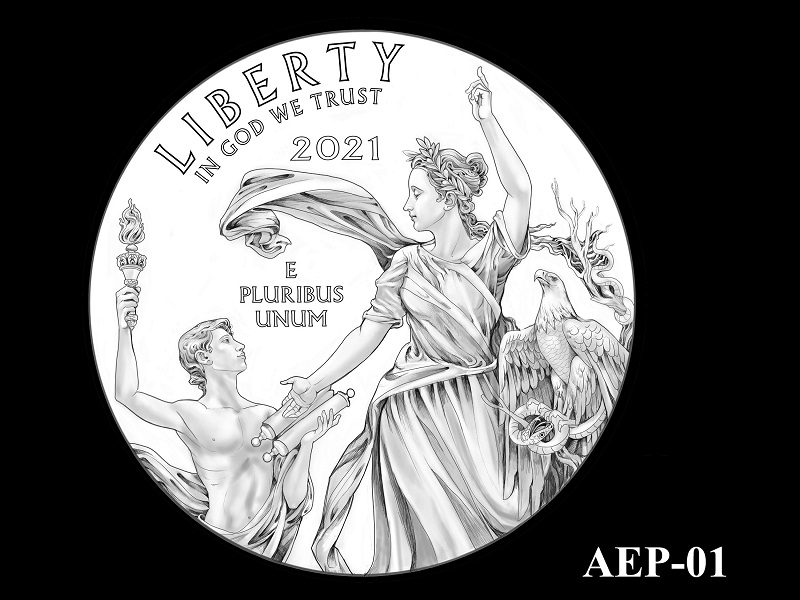 AEP-01 and AEP-13 take inspiration from Moses Jacob Ezekiel’s “Religious Liberty” statue in Philadelphia. The design features a depiction of Lady Liberty and, on her right, the young man as the genius of faith holding the burning torch of religion. The laurel and scroll represent the power of the Constitution, and the eagle clutching a serpent represents vanquishing tyranny through democracy. In AEP-01 Freedom points upward declaring religious liberty. 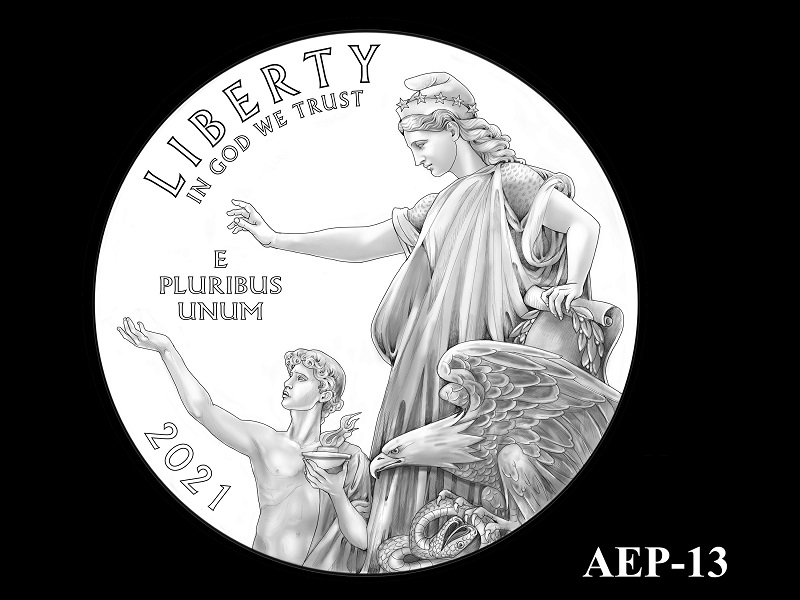 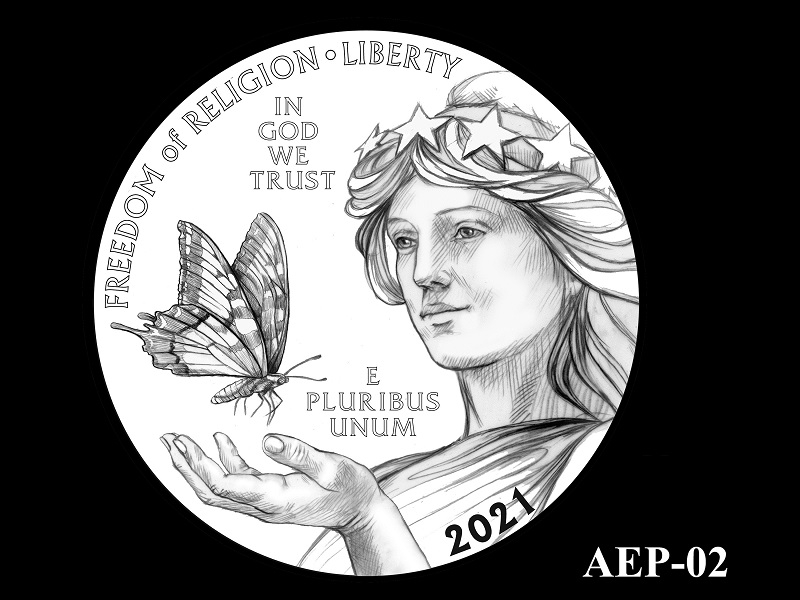 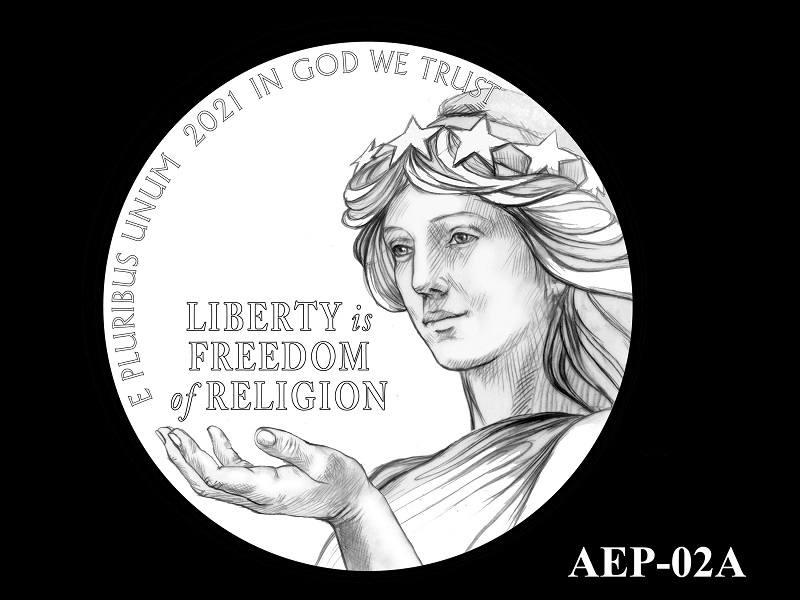 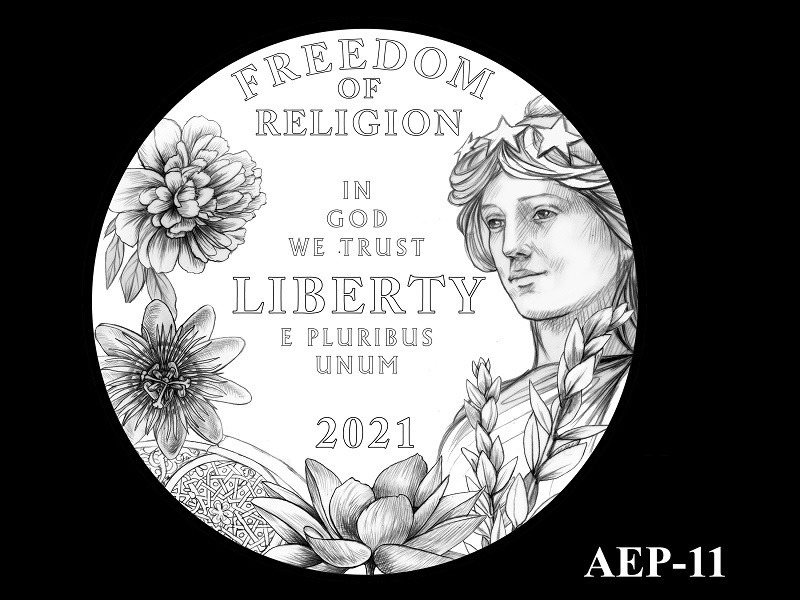 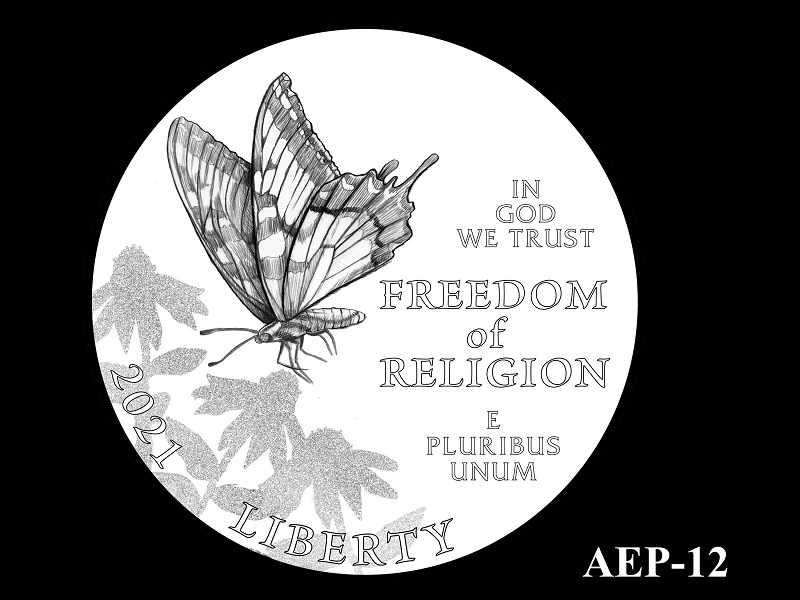 AEP-12 showcases a butterfly and a purple coneflower. The butterfly is used symbolically in many religions because of its transformation from a caterpillar—representing the soul, reincarnation, resurrection, and femininity. The inscription “FREEDOM OF RELIGION” is included. 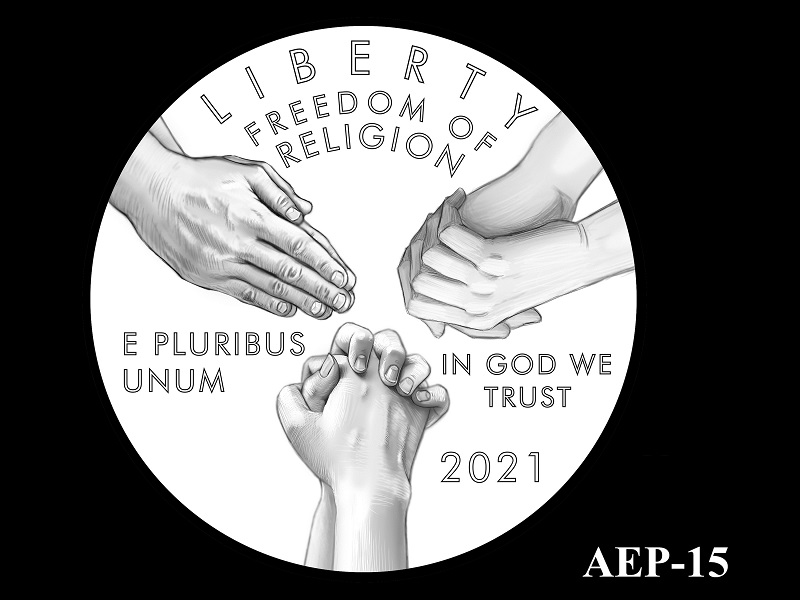 AEP-15 and AEP-15A feature three sets of hands, coming from three different directions, clasped in prayer. These hands represent different directions from which people may come, united by their freedom of religion. In this design, the most universal expression of religion is illustrated – that of prayer. The inscription “FREEDOM OF RELIGION” is included. AEP-15A has a shadow element behind the hands. 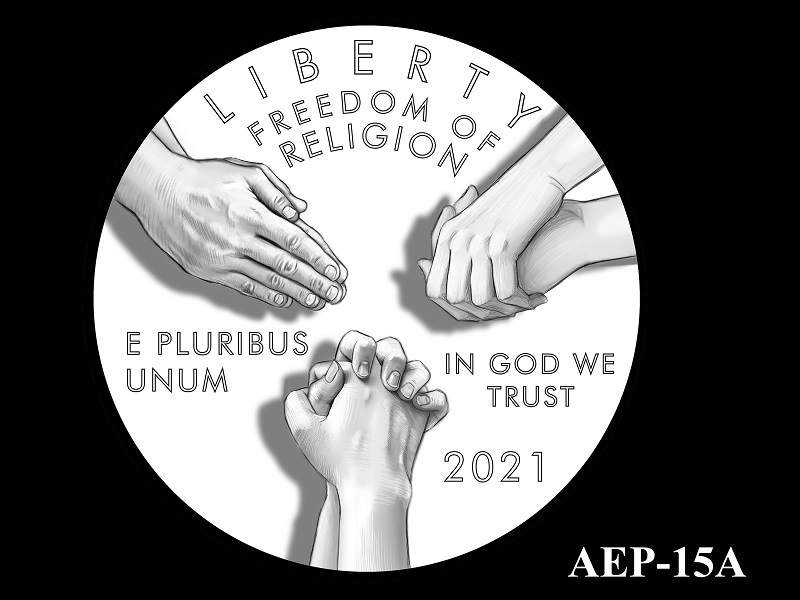 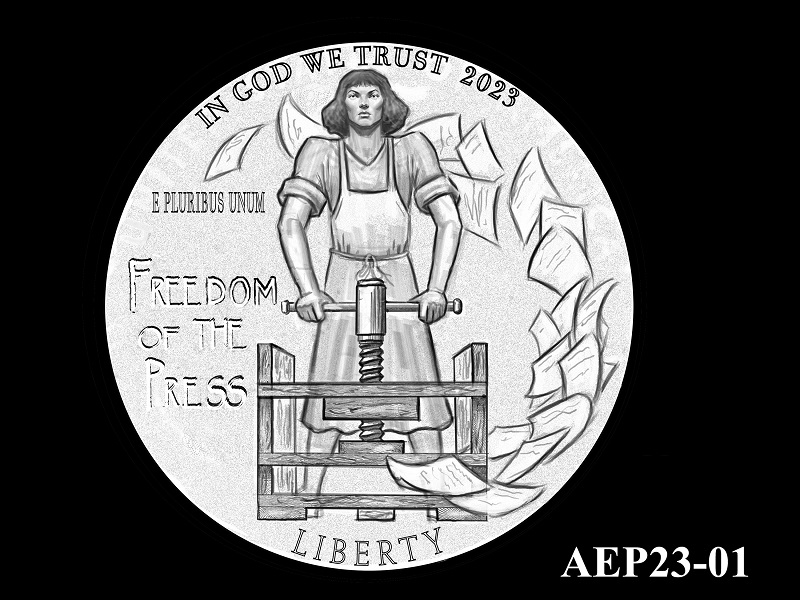 AEP23-01 depicts a figure utilizing an antique book press. The inscription “FREEDOM OF THE PRESS” is included.