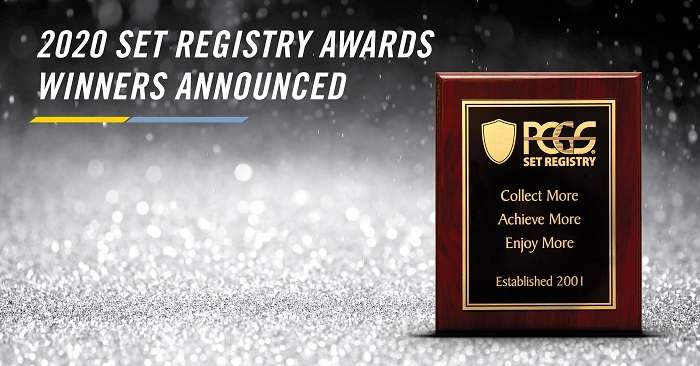 For nearly two decades, PCGS has recognized top collectors and their collections with awards and other special honors. When the PCGS Set Registry Awards launched in 2002, just 15 sets received honors; this year, more than 350 sets are recognized, exemplifying the outstanding growth of the PCGS Set Registry and the incredible popularity of this interactive platform for collectors to build sets and compete with their fellow hobbyists.

“When the PCGS Registry debuted in 2001, it was the first such online platform for collectors,” says PCGS Vice President of Product Development Jamie Kiskis. “It’s become the gold standard in numismatics for collectors who want to share their passion of the hobby with the world all while getting to engage in a little friendly competition with one another. When more than 20,000 collectors display their more than 125,000 prized sets on the online PCGS Set Registry, it not only inspires other collectors to up their games, but it also shows the beautiful diversity of coins that are out there for the world to enjoy and collect.”

While the vast majority of the PCGS Registry Sets honored were picked on technical metrics, such as completeness and grade point averages, some were chosen based on the more subjective merits of overall eye appeal and scope of inclusion. That was the case with the PCGS Best Digital Album, an honor that was selected by PCGS Set Registry members and guests. The 2020 Best Digital Album nods go to an exquisite 1873 United States Proof Set by a collector known as “D. Lud.” Other top awards went to “D.L. Hansen,” “High Desert,” and “Alamo Collection” in the U.S. coin categories while “JBW,” “cannonball!,” and “skandakumera,” were just a few of the many collectors who won various world coin awards.

A complete list of the 2020 PCGS Set Registry winners can be found online.

In addition to the hundreds of outstanding PCGS Set Registry collectors taking home awards for their collections, four numismatic luminaries past and present are being inducted into the prestigious PCGS Set Registry Hall of Fame. The 2020 Hall of Fame inductees are William Sumner Appleton, Del Bland, Bob Simpson, and Sun Keqin.

Appleton was a venerable Massachusetts collector who once owned an 1804 Draped Bust dollar, a trophy known as the “King of American Coins” that was later graded by PCGS and went into other famous collections. Bland was a premier expert in United States Large Cents and became a renowned authority on these early United States copper coins. Simpson, the founder of XTO Energy and co-chairman of the Texas Rangers Major League Baseball team, has long had many top-ranking PCGS Registry Sets consisting of United States coins. Keqin is a top authority on Chinese coins and fields a diverse array of Set Registry collections containing modern coins from China.

“The PCGS Set Registry has long proven to be a successful, exciting platform for collectors year after year, and we have consistently made innovative improvements that have allowed the community to thrive,” remarks PCGS President Brett Charville. “As we continue growing and evolving during our 35th anniversary year in 2021, PCGS will continue enhancing the experience for everyone.”

Professional Coin Grading Service (PCGS) is a third-party coin and banknote grading company that was launched in 1986. Over nearly 35 years, PCGS has examined and certified some 45 million U.S. and world coins, medals, and tokens with a combined value of more than $41.7 billion. For more information about PCGS products and services, including how to submit your coins for authentication and grading, please visit www.PCGS.com or call PCGS Customer Service at (800) 447-8848.

NGC and PMG accepting drop-off submissions at the Coin eXpo