Today, at 9:30 a.m. (EDT), the Citizens Coinage Advisory Committee (CCAC) held the first of two meetings (the second being held tomorrow at 10:00 a.m.) to review and discuss designs for upcoming issues by the Mint. Among the coins and medals that will be reviewed during this two-day meeting period are the Mayflower 400th Anniversary 24-karat gold coins and silver medals, the 2019 American Innovation $1 coins, and the 2021-2025 American Platinum Eagle Proof Coin Series. Today’s meeting focused primarily on the proposed designs for the 2020 Mayflower 400th Anniversary 24K Gold Coin and Silver Medal Program. Below are the various proposed designs and their accompanying descriptions. Let us know in the comments which designs you would choose!

2020 will mark the 400th anniversary of the Mayflower voyage. Carrying a group of people seeking a new way of life and religious freedom, the Mayflower set sail from England to arrive in a new world in late 1620, landing in Plymouth, Massachusetts — or “Patuxet” — as the Wampanoag people called the area. These two distinct cultures intersected as the Pilgrims endeavored to realize the lives they have envisioned. It is a complex history with multiple stories to be told. 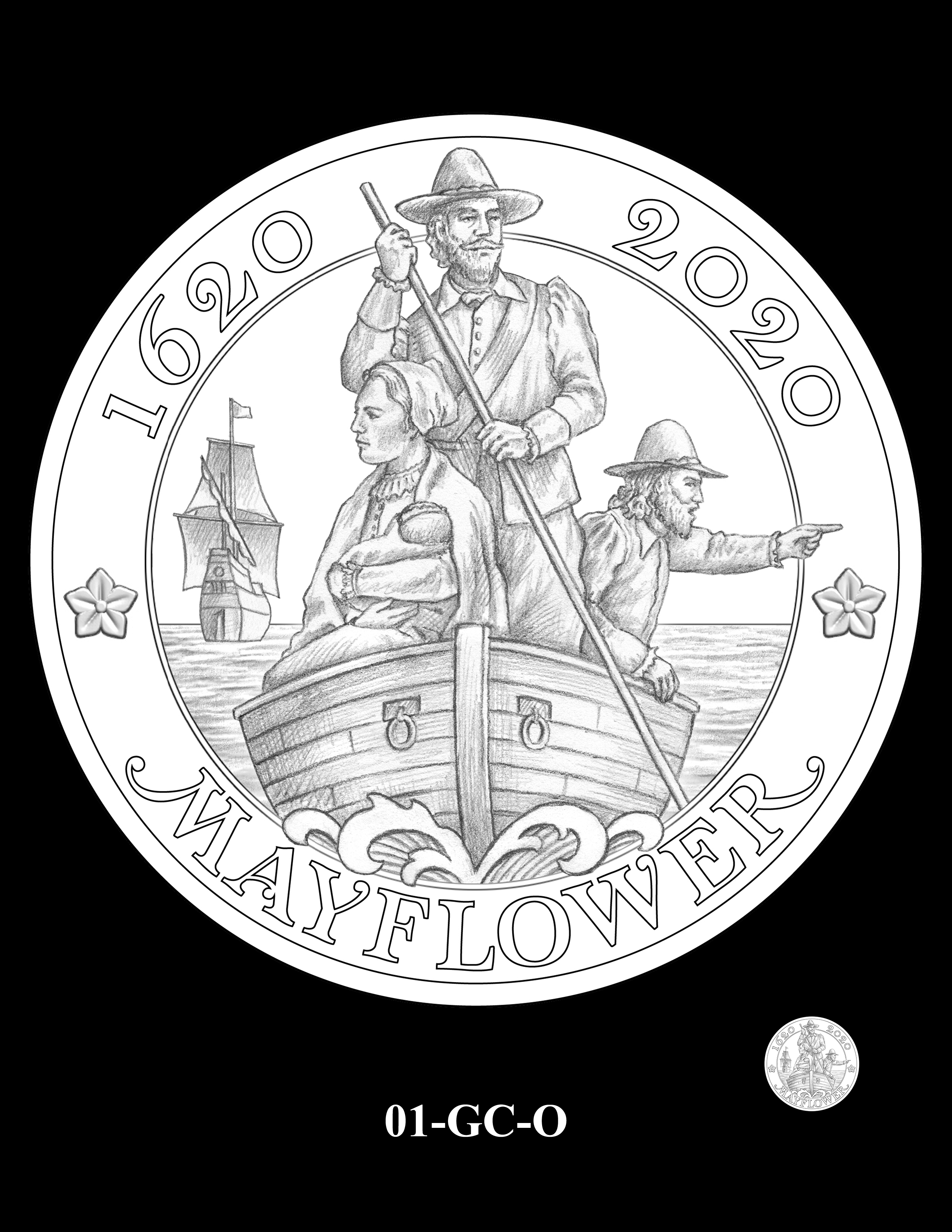 Depicts a landing party from the Mayflower – the first to include a family – as they approach the shore of the new land in late 1620. The silhouette of the Mayflower is seen in the background. Two mayflowers adorn the outer rim. The medal inscriptions include “1620,” “2020,” and “MAYFLOWER.” Hover to zoom. 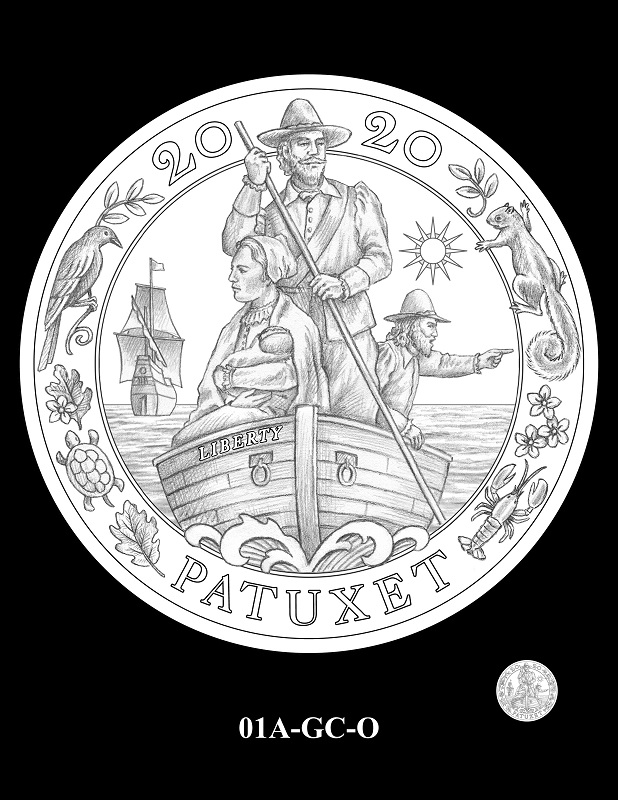 Presents the same composition with a border depicting flora and fauna native to “Patuxet,” the Wampanoag name for the Plymouth, Massachusetts area where the Mayflower arrived. Inscriptions are “2020,” “LIBERTY,” and “PATUXET.” 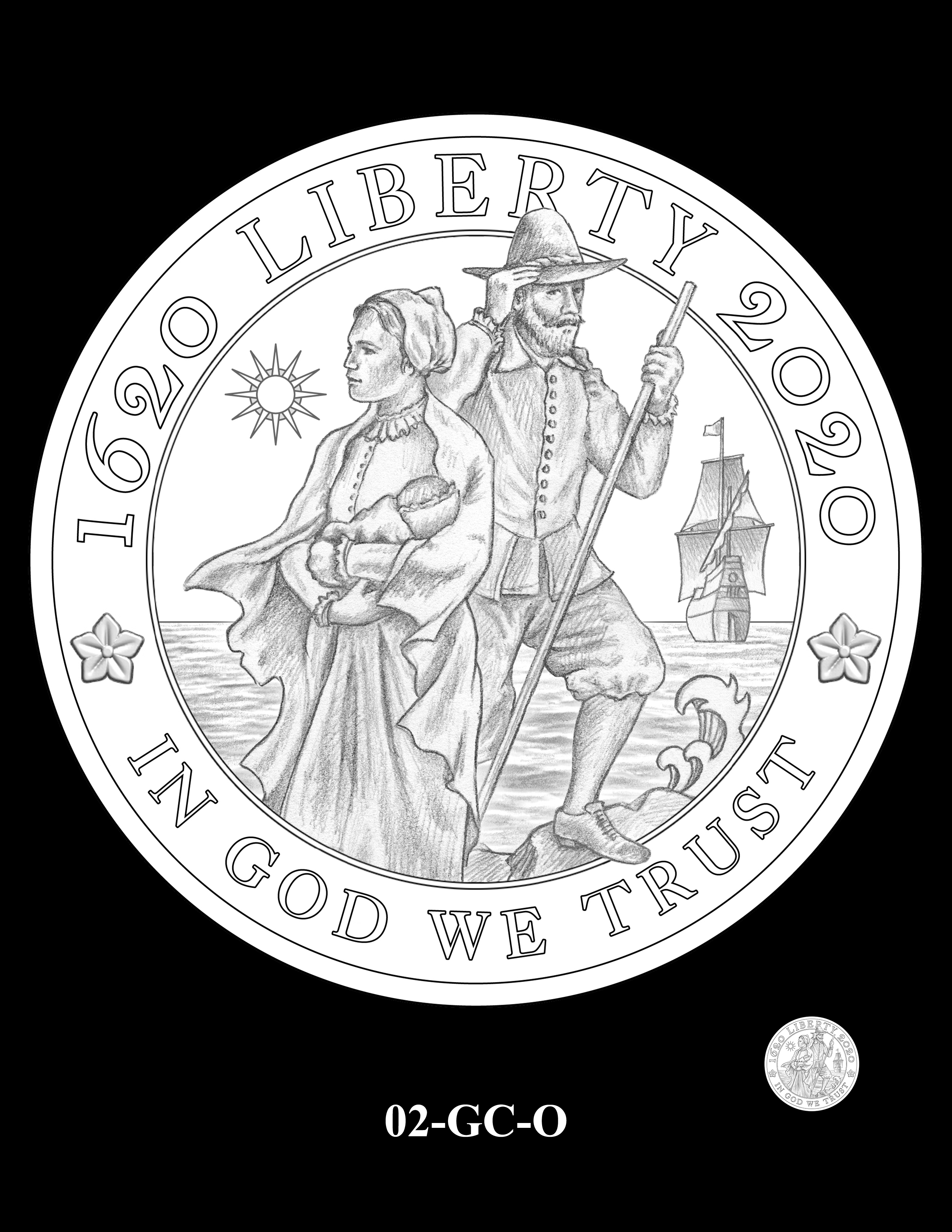 Depicts a Mayflower family stepping out of the frame into a new life. The mother cradles her baby and the father holds his hat bracing against the cold and windy weather that foreshadows the challenges they will face. The silhouette of the Mayflower is anchored in the background. The inscriptions of “LIBERTY,” “1620,” “2020,” and “IN GOD WE TRUST” reinforce their journey for religious freedom and a fresh start in a new land. 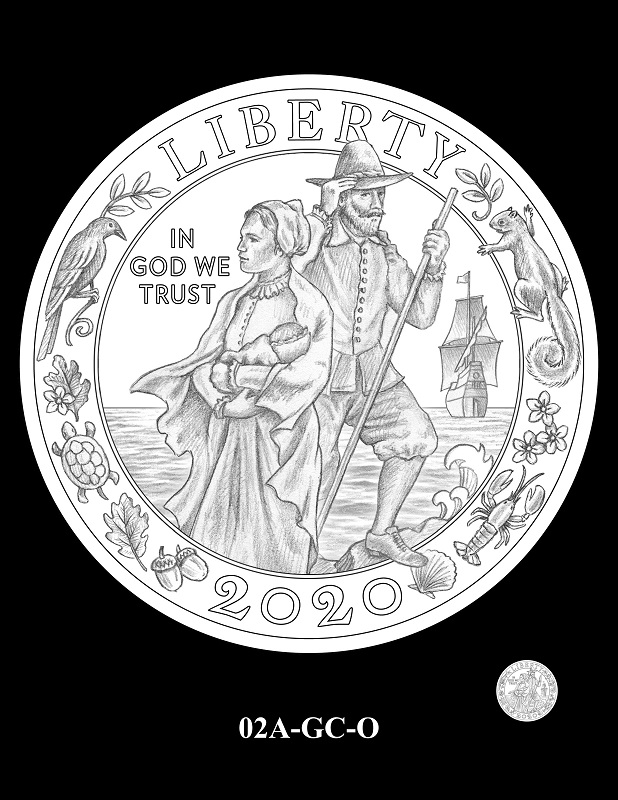 Features the same composition surrounded by local flora and fauna on the border, representing the homeland of the Wampanoag people. Inscriptions are “LIBERTY,” “IN GOD WE TRUST,” and “2020.” 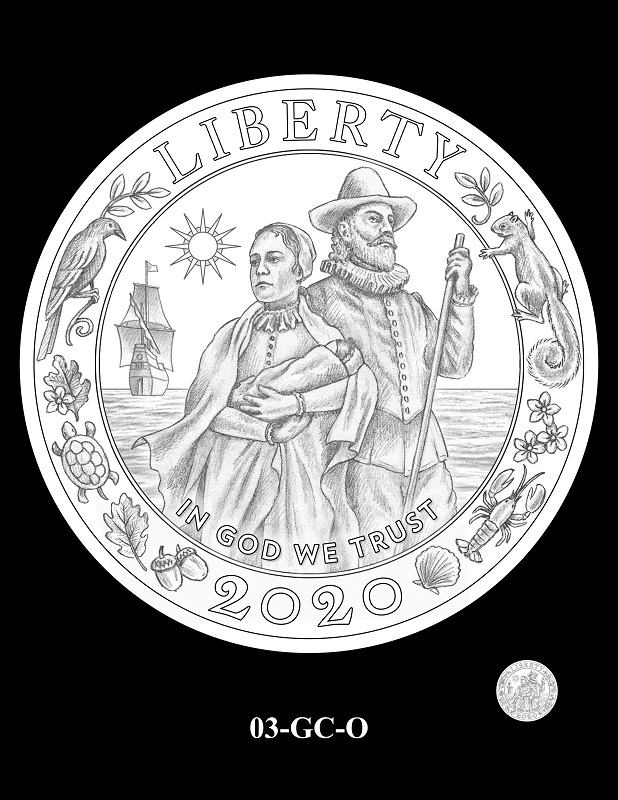 Portrays a newly arrived Mayflower family standing firmly on land with apprehension about what lies ahead, but also with determination to thrive in unfamiliar surroundings. Inscriptions include “TOGETHER INTO A CIVIL BODY POLITICK” from the Mayflower Compact, along with “1620, and “2020.” 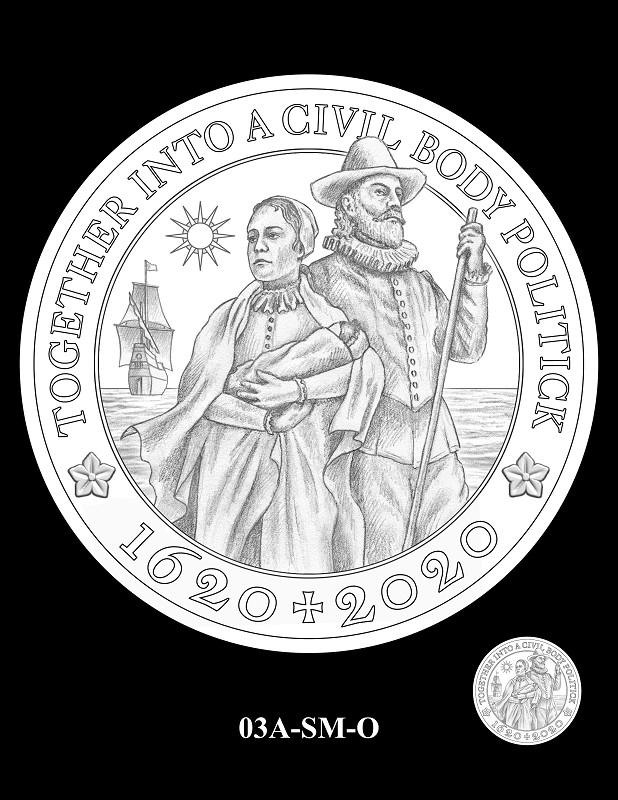 Also features the same composition with local flora and fauna around the border, representing the land of the Wampanoag people. Inscriptions are “LIBERTY,” “IN GOD WE TRUST,” and “2020.” 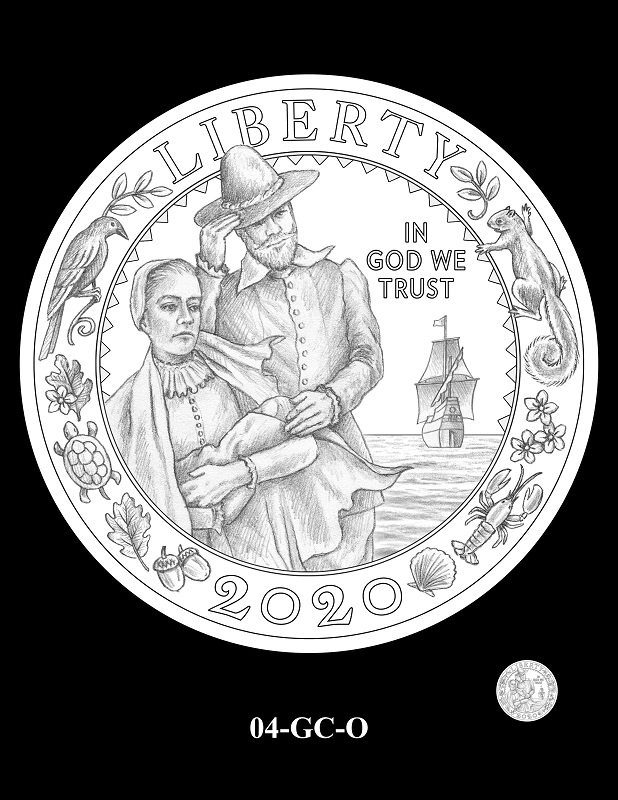 Features a Mayflower family bracing against the cold and windy weather, foreshadowing their coming hardships, while the Mayflower is anchored in the harbor. The local flora and fauna on the border, along with a Wampanoag triangle design represent the Wampanoag homeland. Inscriptions are “LIBERTY,” “IN GOD WE TRUST,” and “2020.” 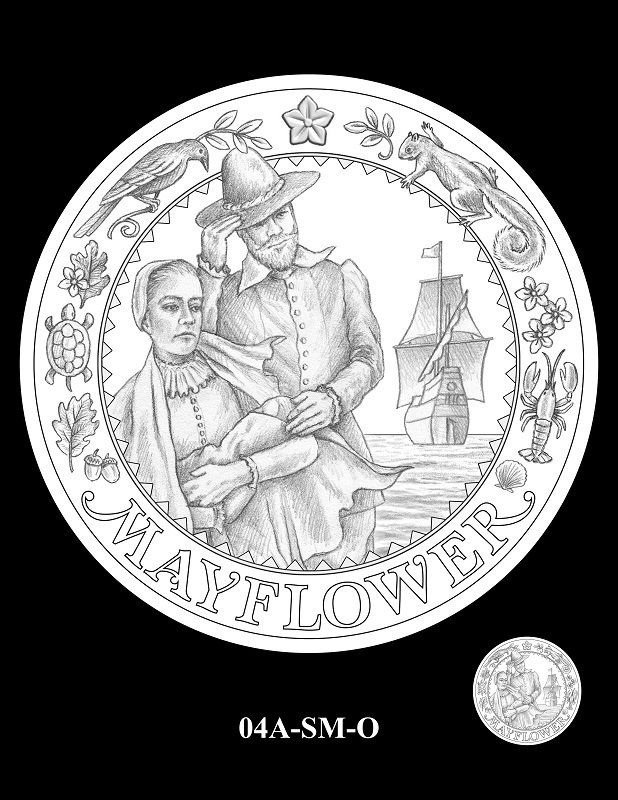 Depicts the same composition but is formatted as a medal with the inscription “MAYFLOWER” arced along the bottom. 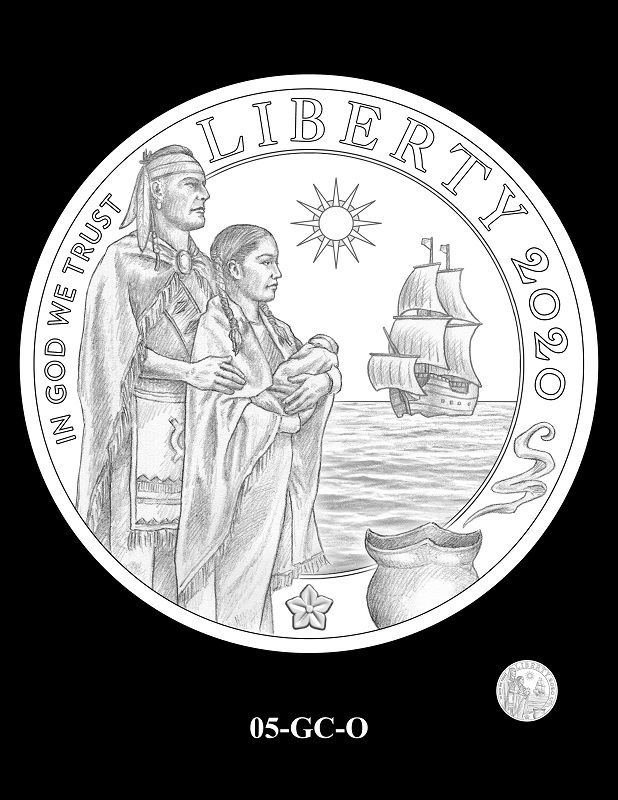 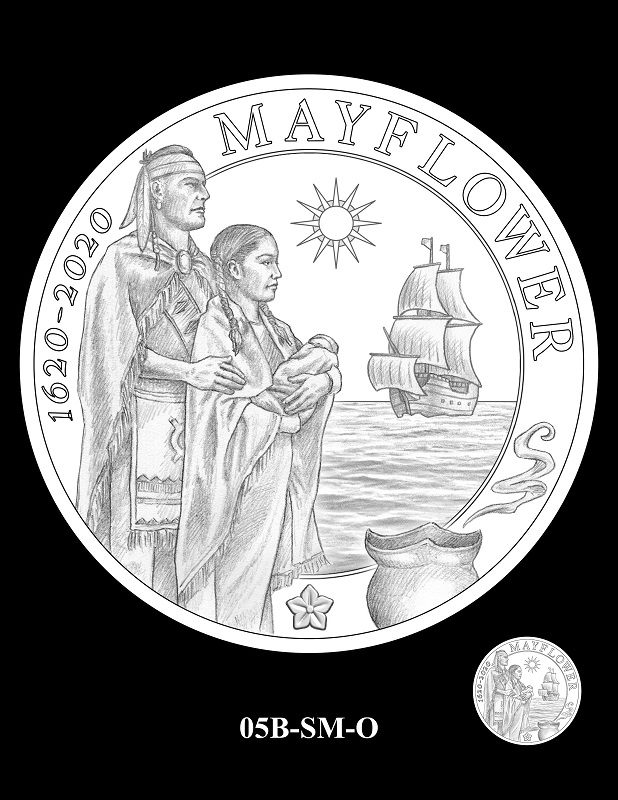 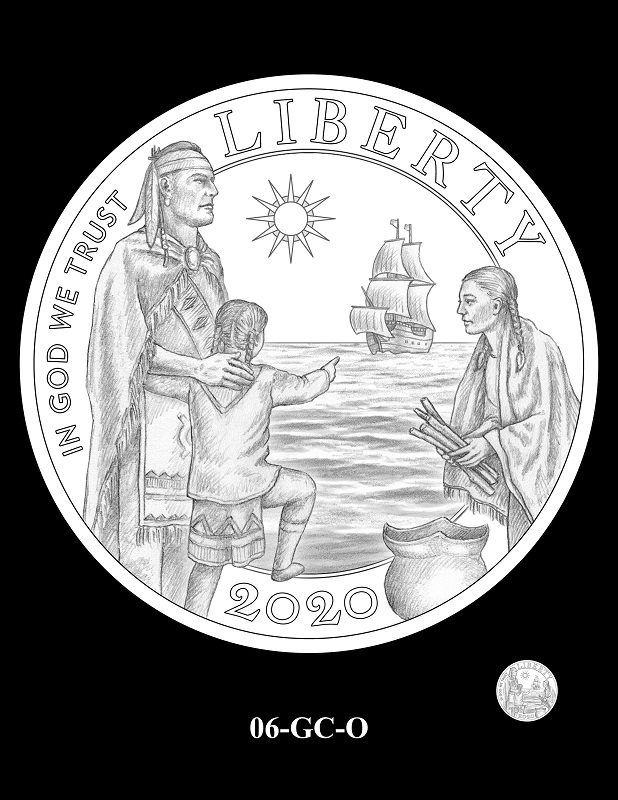 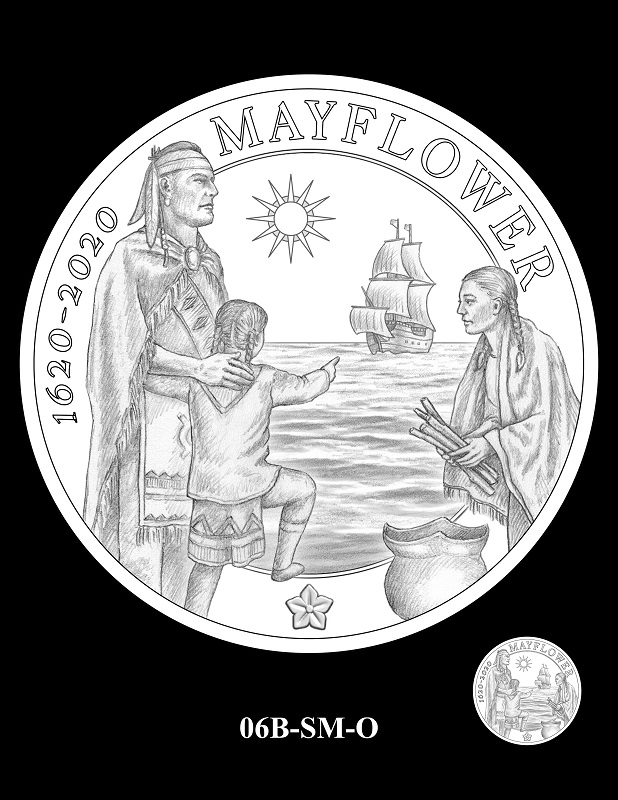 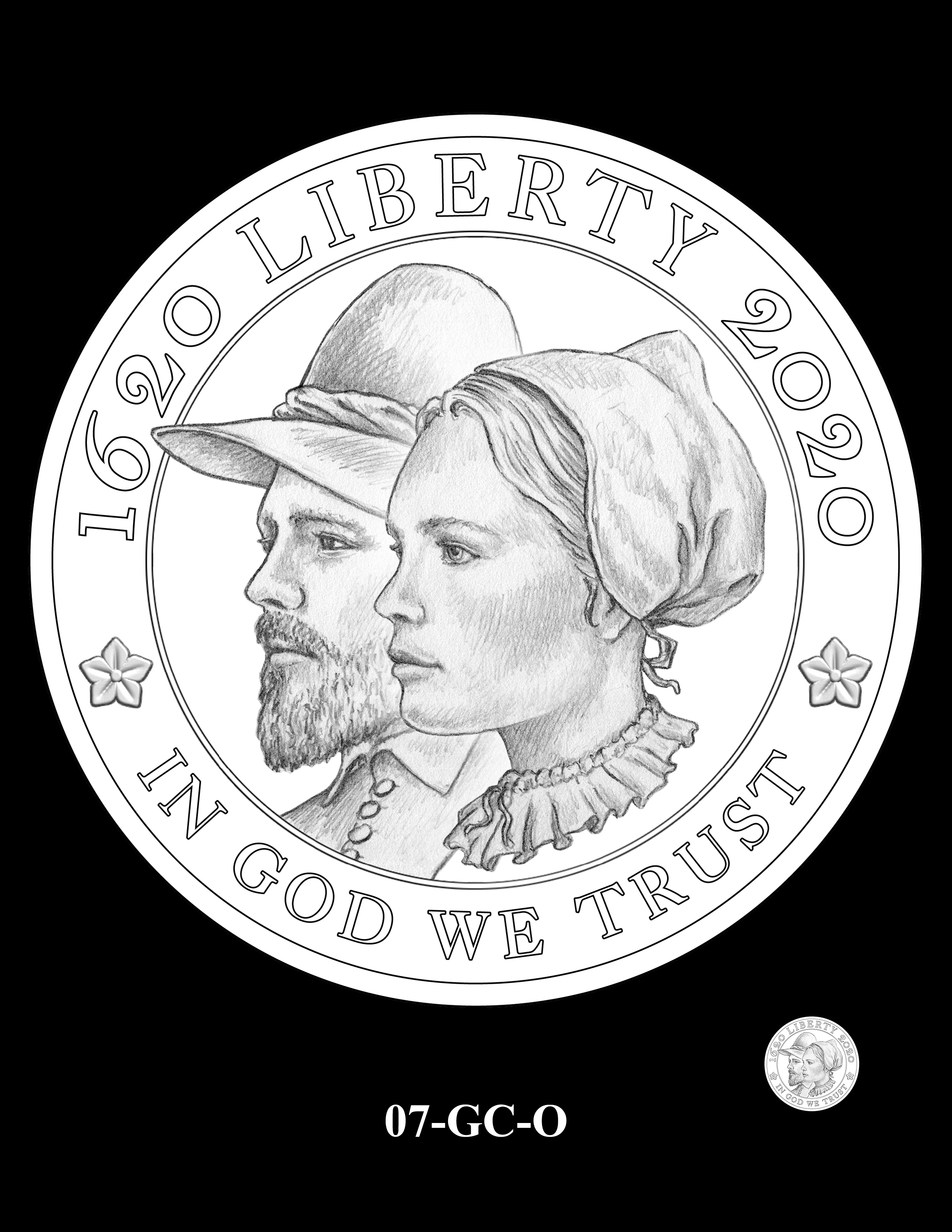 Depicts portraits of a Pilgrim man and woman, representing the beginnings of a transition from monarchy to democracy. The dual portraits symbolize a democratic organization, with their resolute expressions focused on a self-determined future. Included inscriptions are “LIBERTY,” “1620,” “2020,” and “IN GOD WE TRUST.” 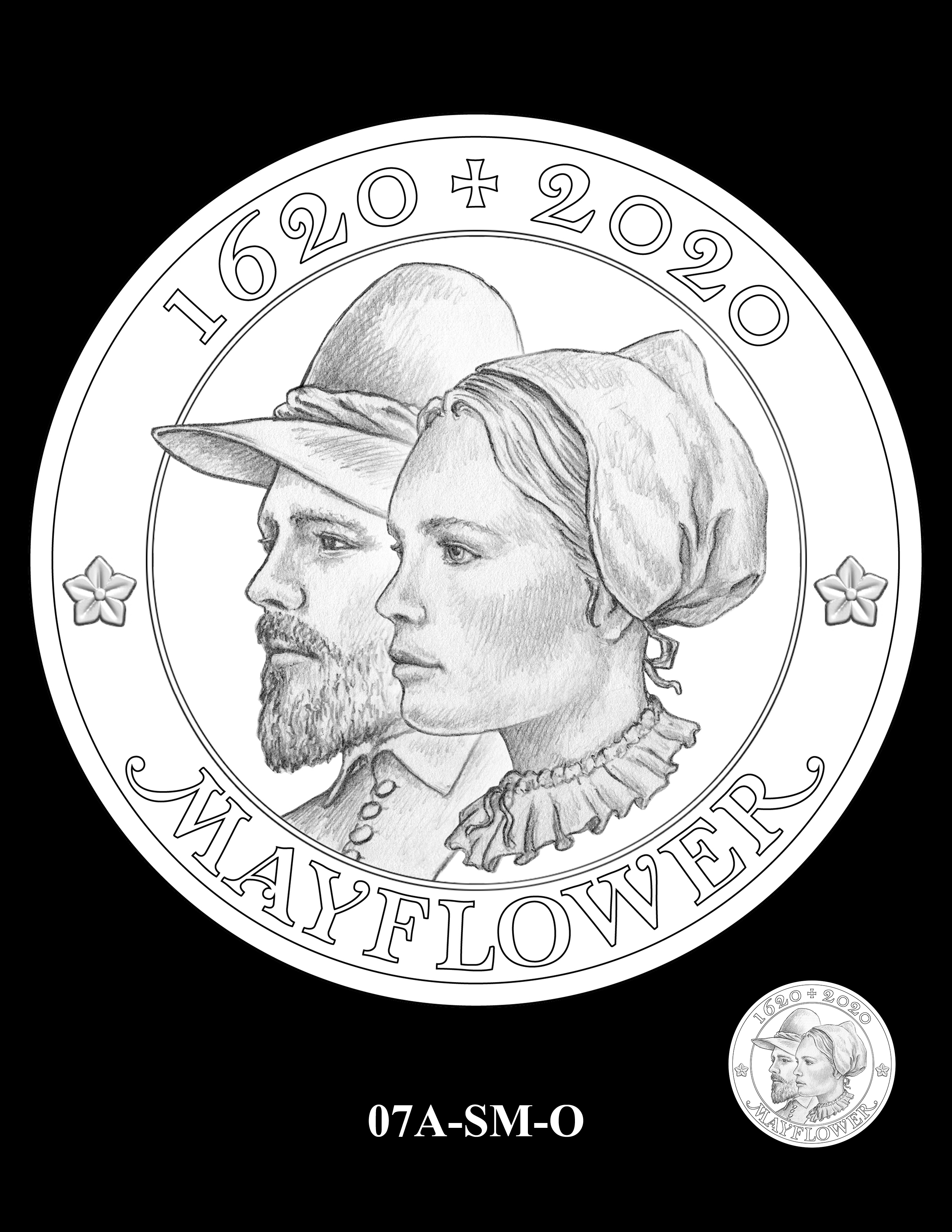 Features the same composition, but formatted as a medal, utilizes the inscriptions “1620,” “2020,” and “MAYFLOWER.” 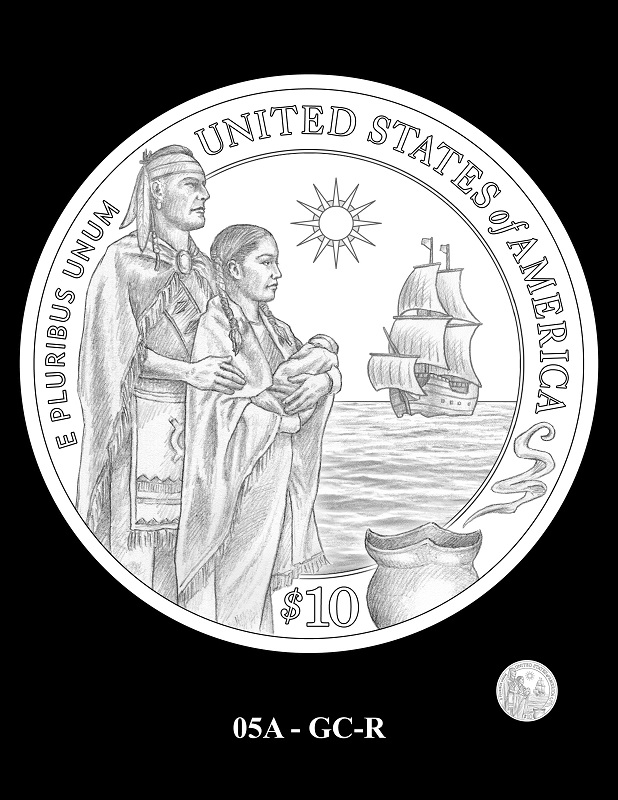 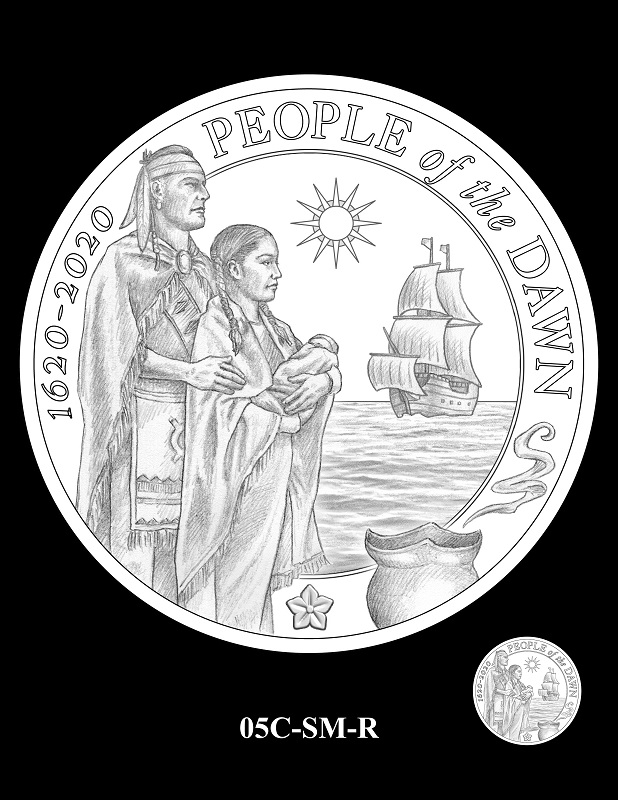 Formatted as a medal reverse, incorporates the inscriptions “PEOPLE OF THE DAWN,” and “1620-2020.” 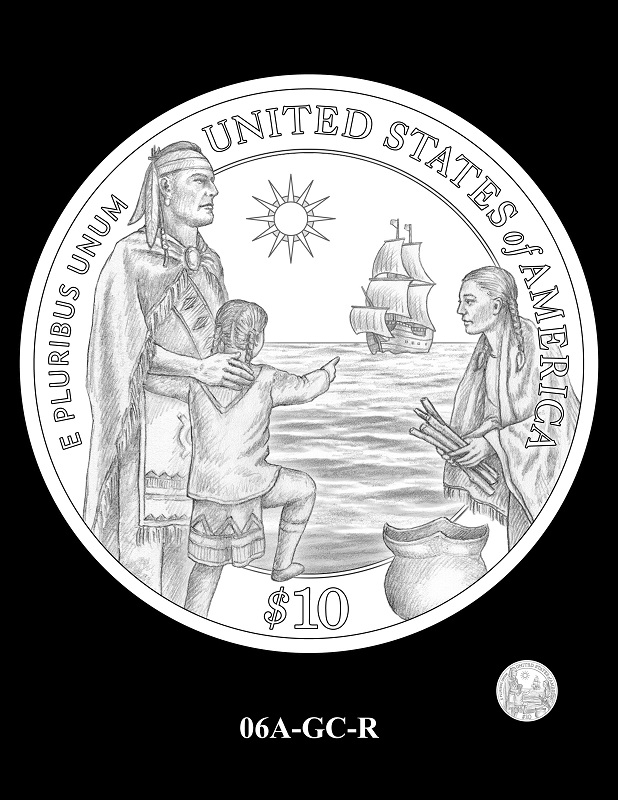 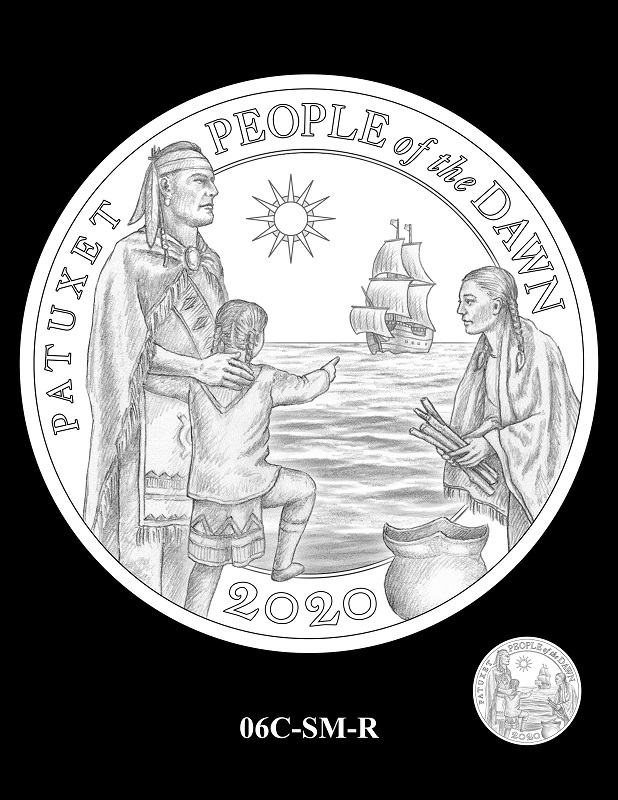 Formatted as a medal reverse, incorporates the inscriptions “PEOPLE OF THE DAWN,” “PATUXET,” and “2020.” 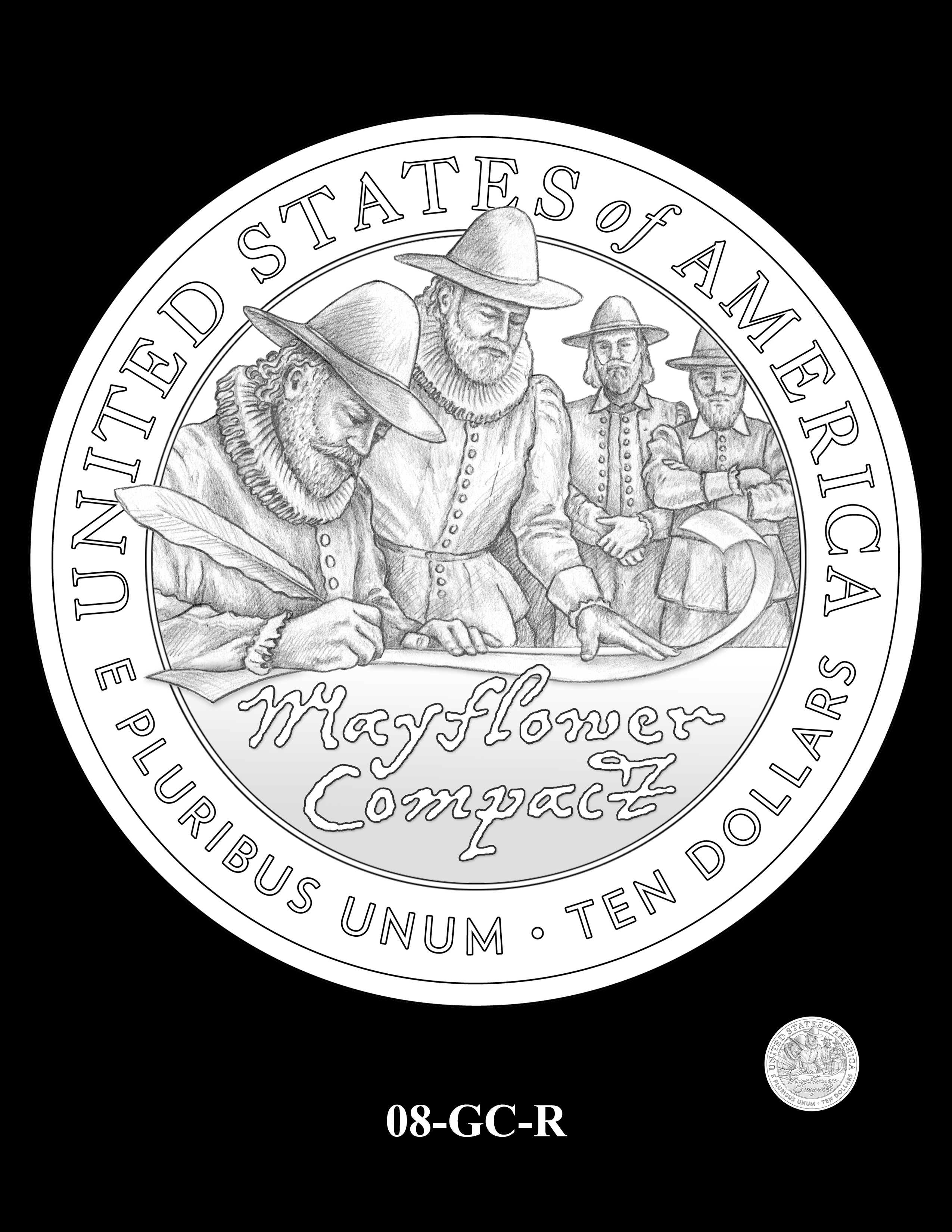 Depicts the signing of the Mayflower Compact by Mayflower passengers. Signed before they left the ship, the Mayflower Compact contained tenets that would later become the foundation for the U.S. Constitution and other important documents reflecting the core of our democratic principles. Inscriptions are “UNITED STATES OF AMERICA,” “MAYFLOWER COMPACT,” “E PLURIBUS UNUM,” and “FIVE DOLLARS.” 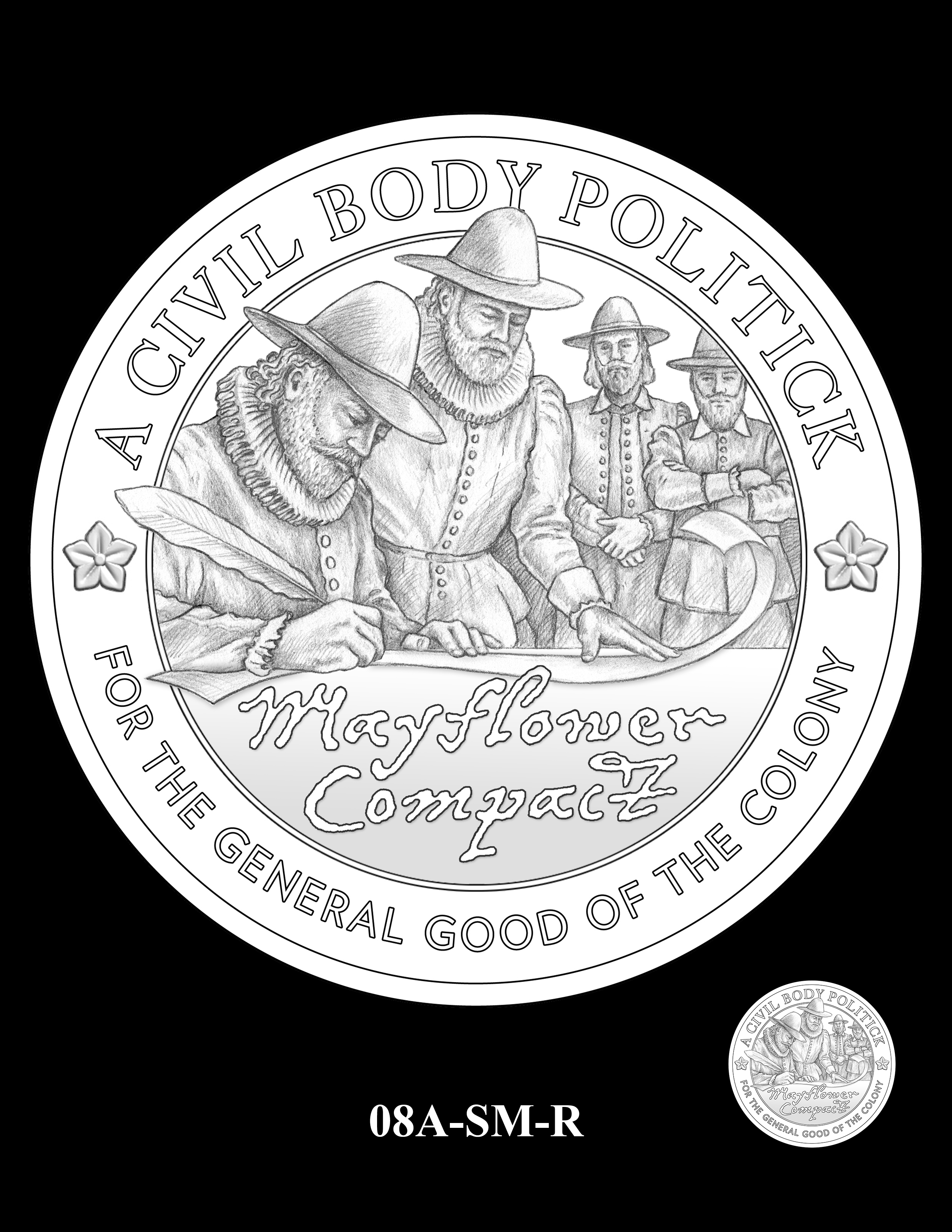 Uses the same composition, formatted as a medal with the inscriptions “A CIVIL BODY POLITICK,” and “FOR THE GENERAL GOOD OF THE COLONY,” excerpts from the Mayflower Compact. 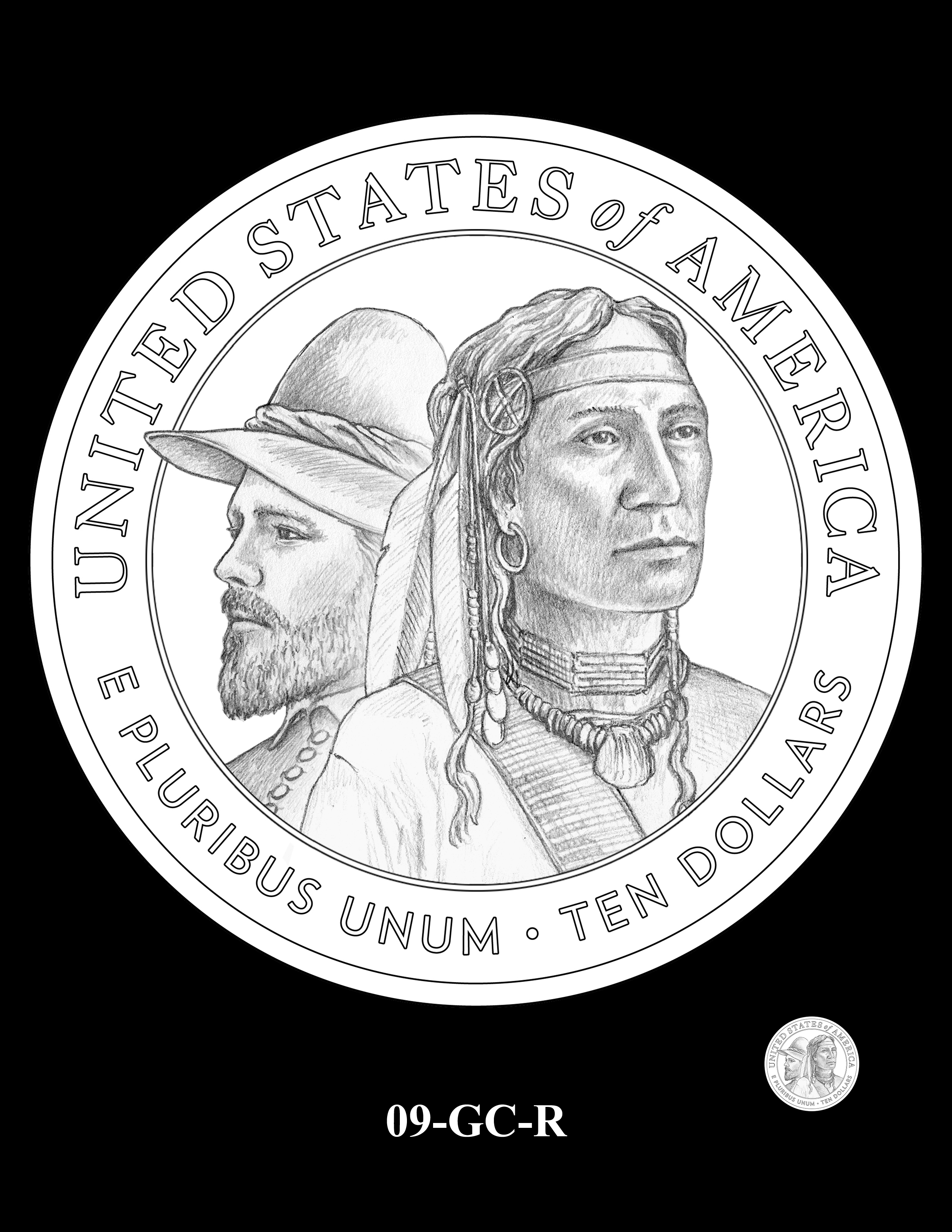 Features a Pilgrim and a Wampanoag Indian, depicted back to back in dignified and powerful portraits. They partner in cooperation, yet face away from each other with differing visions, agendas, and futures. Inscriptions are “UNITED STATES OF AMERICA,” “E PLURIBUS UNUM,” and “FIVE DOLLARS.” Formats the same composition as a medal and incorporates the inscriptions “PILGRIM-WAMPANOAG ALLIANCE,” and “FOR THE COMMON DEFENSE,” the primary reason for the alliance. 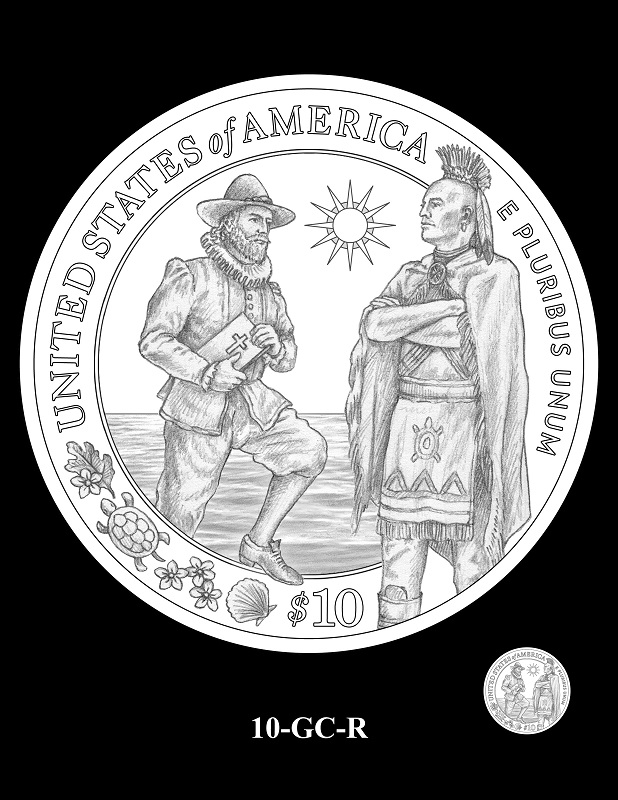 Depicts the intersection of two cultures. Mayflower passengers arrived seeking a new way of life and religious freedom while the Wampanoag people seek to protect their existing homeland, culture and traditions. Inscriptions are “UNITED STATES OF AMERICA,” “E PLURIBUS UNUM,” and “$10.” 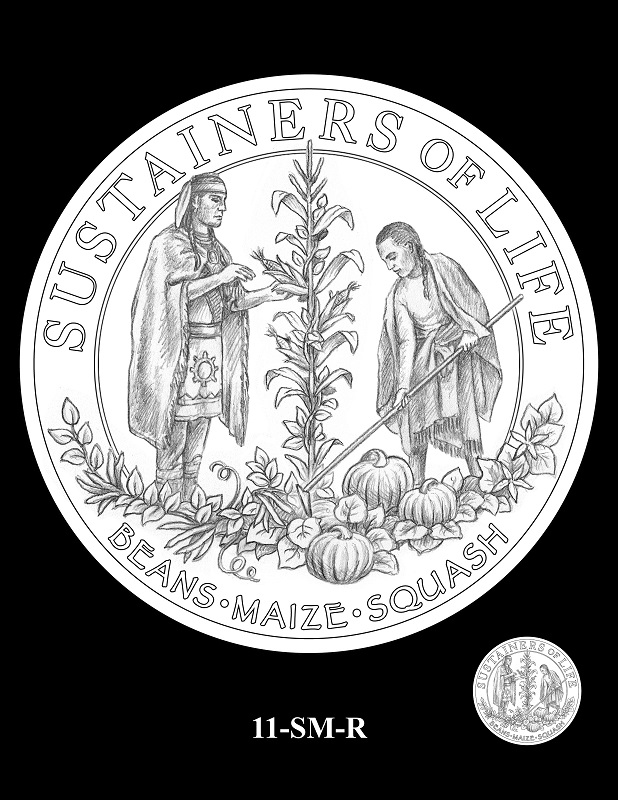 Depicts a Wampanoag man and woman employing a planting technique used to grow several crops that were staples for the Wampanoag people. This method helped keep the soil healthy, maintaining the resources for annual plantings and successful harvests. The inscription “SUSTAINERS OF LIFE” recalls not only this sustainable planting technique but the critical skills the Wampanoag people afforded to the Pilgrims by teaching them how to successfully plant and harvest the land. The additional inscriptions of “BEANS,” “MAIZE,” and “SQUASH” are arced across the bottom border. 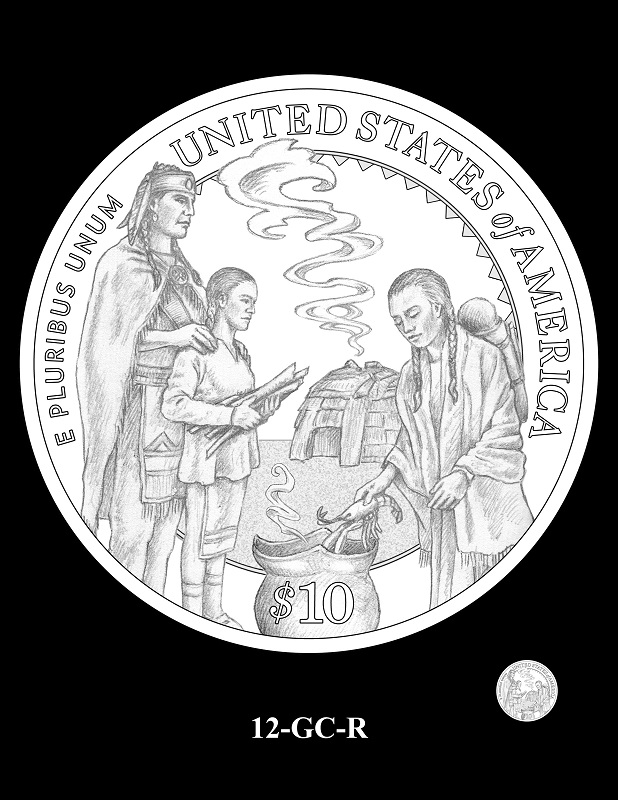 Depicts a Wampanoag family during the course of their daily activities. A traditional Wetu home is in the background with the smoke from its central fire rising through an opening in the roof. Inscriptions are “UNITED STATES OF AMERICA,” and “E PLURIBUS UNUM.” 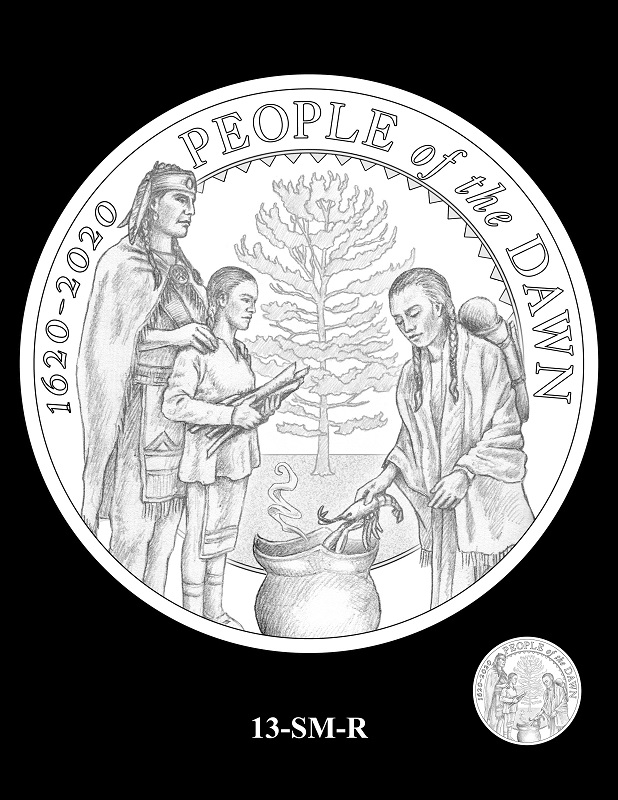 Also depicts a Wampanoag family during the course of their daily activities. A large White Pine tree in the background symbolizes the origins of the Wampanoag Creation Story. Inscriptions are “PEOPLE OF THE DAWN,” and “1620-2020.”