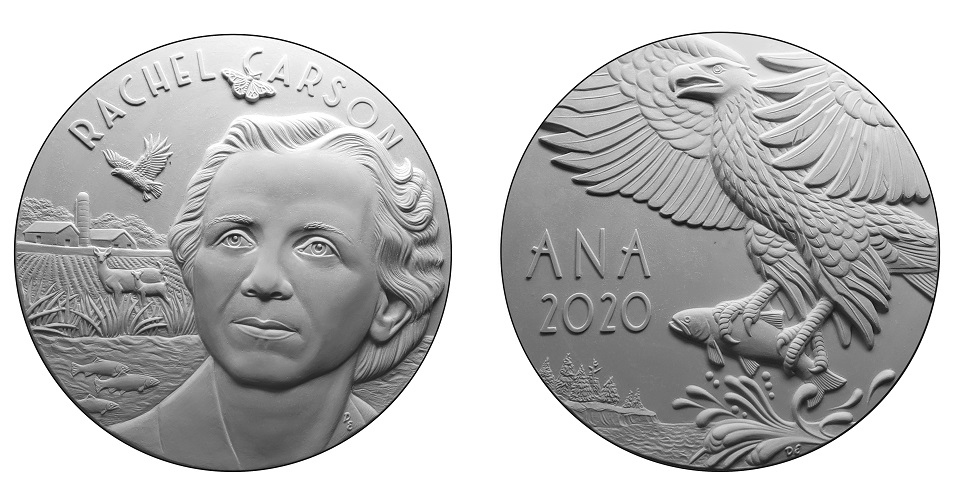 The subject of the 2020 ANA Medal is Rachel Carson, an American author, biologist, and conservationist. In 1962 she wrote the book, Silent Spring, which concerned the degradation of the environment in general and the destructive properties of the chemical spray, DDT, which was impacting the natural world through the air, water, and land. The book was highly criticized by the chemical companies at the time. Many of which had developed pesticides that had major impacts on the movement to thwart Rachel’s ideas on conservation along with other chemical companies that put their profits above our way of life as it pertains to our environment.

The effects on our national symbol, the bald eagle, were particularly devastating. The DDT used for the crop spraying had affected the eagles’ eggs to the point where the eggshells began to be too thin and led to the death of most of America’s bald eagle chicks.

Rachel persevered, undaunted, and in 1963 she testified before President Kennedy’s Science Advisory Committee in Washington DC. At the time, Rachel was suffering the effects of radiation for the breast cancer she had developed. She was dying but continued the fight for her most worthy cause.

Carson’s work had essentially kick-started the environmental movement for the preservation of our flora and fauna. 60 years later, environmentalists are still fighting to protect our natural environment. With climate change and the rollback of many environmental protections, Carson’s work is particularly relevant today. Many consider Rachel Carson to be the most important woman of the 20th Century, with her battle being raged by groups who still have respect for our natural world, which is disappearing at an alarming rate. She has been criminally overlooked and underrated in her significance to the environmental future of our world. 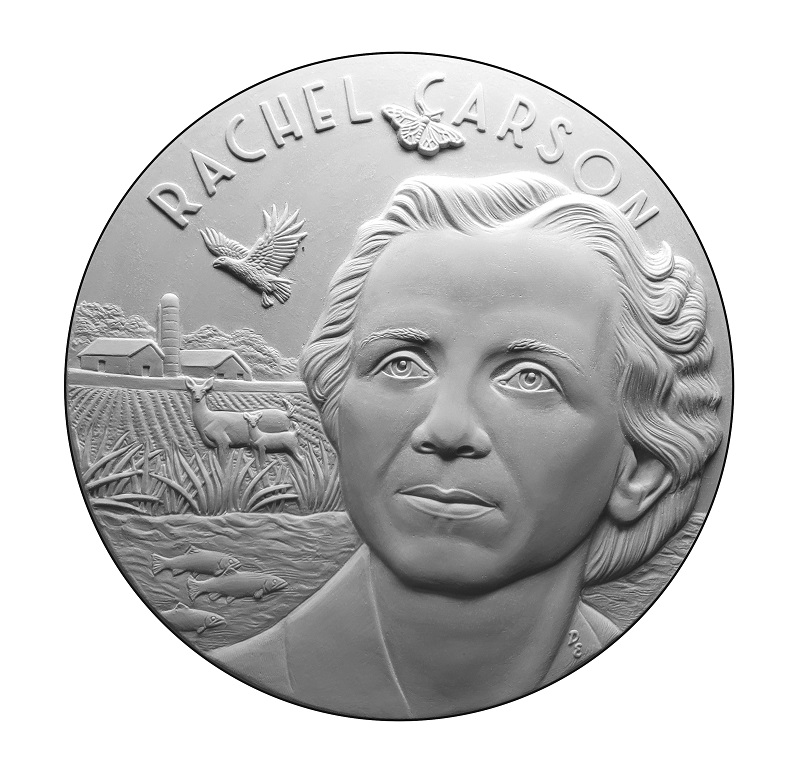 When designing the medal, I first re-read her book, Silent Spring. I had read it when I was in elementary school and definitely needed a refresher. As stated before, the pesticides negative effect on the air, land, and water was particularly devastating. My obverse design attempts to illustrate all three elements of the natural world most affected by the use of chemicals to eradicate pests. An eagle flies in the sky, a deer and fawn browse on vegetation on a farmer’s field while fish swim in a fast-moving river. Her favorite butterfly, the monarch, is perched on her name. A solemn but hopeful look is present on the portrait of Carson. I am sure she would still be unsatisfied and still be battling for our environment had she lived today. 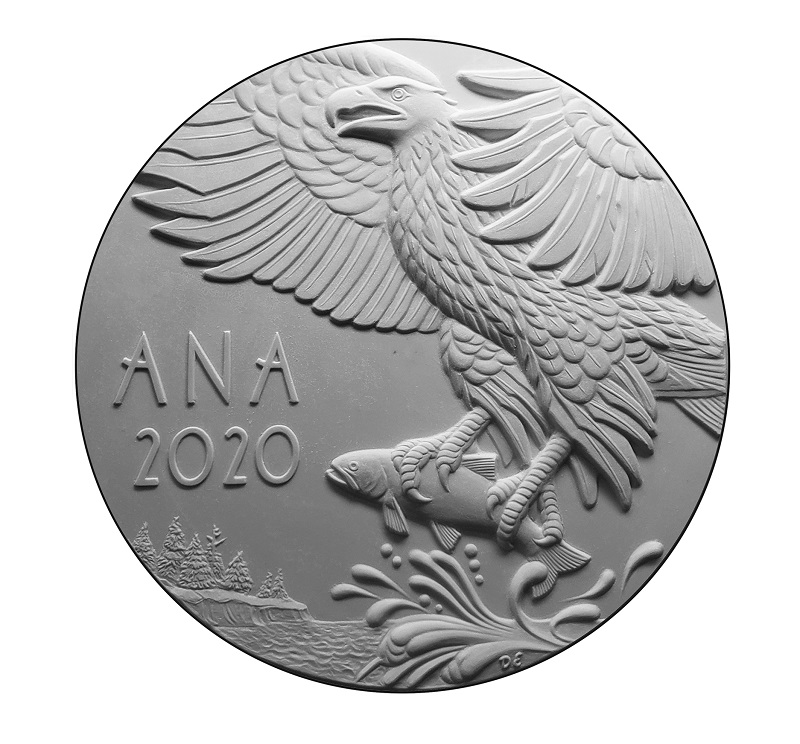 For the reverse, I have depicted a bald eagle as it swoops down onto the water to snag a trout to bring back to the nest to feed her hatchlings. The American bald eagle has been a success story thanks to Carson’s unwavering efforts to make our natural world more safe and livable. In fact, I have witnessed many eagles on my bike while riding in Pennsylvania and beyond. It is always a thrill to witness this majestic bird in flight. They are unmistakable with their size and white head and tail feathers as they glide through the air. They are usually found near a water source, where its main diet consists of fish.

The American bald eagle deserves its place as our national symbol. To see one in flight is to witness one of the most majestic creatures to inhabit this precious earth that we all inhabit.