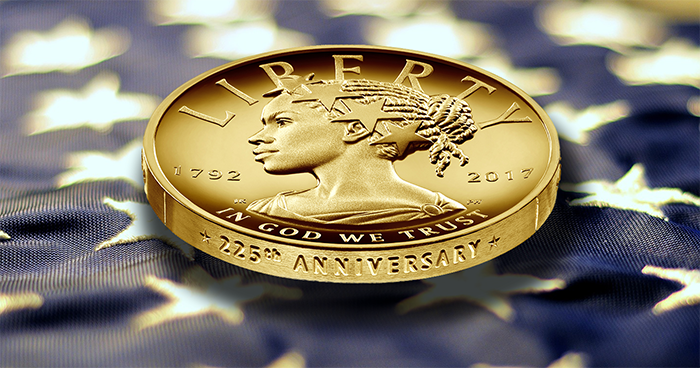 The 2017 American Liberty 225th-anniversary gold coin (product code 17XA) goes on sale at noon (Eastern time) today. In contrast to Tuesday’s release of the 2017 Congratulations Set, however, no one is expecting a two-minute sell-out.

Not that the coin doesn’t have a great deal going for it. It’s the first in what is hoped will be a series of coins portraying the allegorical ideal of Liberty as someone other than the white European we’ve grown accustomed to seeing. The effigy is beautifully rendered in high relief; and, unlike with so many past interpretations of Liberty, she is rendered in a strong, beautiful, and non-sexualized manner. Love them or hate them, the stars about her head distill an ocean of American history—both the grand and noble aspects, and aspects that are painful for modern Americans to remember. The eagle on the reverse has been captured in a rather awkward phase of flight, but the detail is splendid. Great care has been taken with the packaging, which includes a handsome, black-lacquered hardwood presentation box and a full-color, hardcover booklet.

Not so much in the coin’s favor are the fact that it hits the market at a high point for gold prices (about $1,240 at the moment), and the Mint’s additional $400 premium. Of course, some premium is to be expected, to account for the tremendous overhead in producing the coin. For one thing, the cost of gold isn’t just the cost of the metal. Many dollar signs folded into the sourcing of the metal, planchet production, shipping, security, storage, and assays. Then there are the hundreds of payroll hours that went into the coin’s design, the review-and-reporting process, die production, testing and revision, and final production; package design and production (including the booklet); multiple quality-control steps; warehousing and order fulfillment; security; and marketing—not to mention the product’s share of the many day-to-day expenses that go into running the Mint, maintaining the facilities, compensating staff, and ensuring their safety and well-being.

This author has no way of knowing how these costs break down. Perhaps they’ll be more evident in the Mint’s annual report. From the perspective of many regular Mint customers, however, the $400 premium seems excessive, especially in light of the coin’s high mintage limit of 100,000.

In any case, the 2017 American Liberty gold coin marks a historic point on the Mint’s 225-year timeline. I, for one, will be hoping it sells well enough to justify continuing the series.

From the Press Release of the United States Mint

Struck in conjunction with the Mint’s 225th anniversary, this unique coin portrays allegorical Liberty as an African-American woman. Its obverse design depicts a profile of Liberty wearing a crown of stars, with the inscriptions LIBERTY, 1792, 2017, and IN GOD WE TRUST. The reverse design depicts a bold and powerful eagle in flight, with eyes toward opportunity and a determination to attain it. Inscriptions include UNITED STATES OF AMERICA, E PLURIBUS UNUM, 1OZ .9999 FINE GOLD, and 100 DOLLARS.

Produced at the West Point Mint, this 1-ounce, .9999 fine, 24-karat gold coin is encapsulated and placed in a custom-designed, black wood presentation case. A special 225th-anniversary booklet, which is the certificate of authenticity, accompanies each coin.

Pricing (currently $1,640) is based on the Mint’s pricing schedule for products containing gold. These products are priced according to the range in which they appear on the United States Mint Numismatic Gold, Commemorative Gold, and Platinum Product Pricing Grid. Current pricing information is available at http://catalog.usmint.gov/coins/gold-coins/.

Orders will be accepted at https://catalog.usmint.gov/ and at 1-800-USA-MINT (872-6468). Hearing- and speech-impaired customers with TTY equipment may order at 1-888-321-MINT. Information about shipping options is available at http://www.catalog.usmint.gov/customer-service/shipping.html. There is a threshold $24,999 for credit card purchases via the website.

To maximize availability of this historic coin to the public, the Mint is not imposing a household order limit. The Mint will also accept orders at its sales counters in Washington, DC; Philadelphia; and Denver. Sales will be open to all members of the public, including dealers. Mintage is limited to 100,000 units.  ❑
Share: