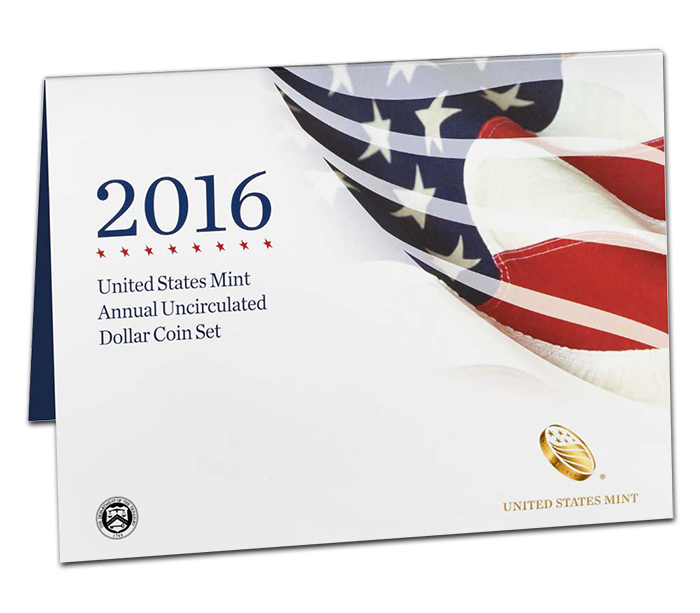 Priced at $49.95, this set contains the following Uncirculated-quality $1 coins in production this year:

Three Presidential $1 Coins
Struck at the Philadelphia Mint, the obverses of these coins have the images of Richard M. Nixon, Gerald R. Ford, and Ronald Reagan, while their reverses have a rendition of the Statue of Liberty.

One Native American $1 Coin
Struck at the Denver Mint, this coin’s reverse features two helmets—one in the shape of the U.S. helmets used in World War I and the other in the shape of a World War II helmet. Next to them are the inscriptions WWI and WWII. Behind the helmets are two feathers that form a V shape, symbolizing victory, unity, and the important role that the code talkers played in both world wars. The coin’s obverse continues to feature the image of Sacagawea.

One American Eagle Silver Coin
This .999 fine silver coin bears the W mintmark of the West Point Mint. Its obverse depicts Adolph Weinman’s Walking Liberty design, while the reverse features a heraldic eagle with shield, an olive branch in its right talon, and arrows in its left. 30th ANNIVERSARY is incused on the coin’s edge to mark this milestone in the Mint’s production of this coin.

Orders will be accepted at https://catalog.usmint.gov and at 1-800-USA-MINT (872-6468), while hearing- and speech-impaired customers with TTY equipment may order at 1-888-321-MINT. Information on shipping options is available at https://www.catalog.usmint.gov/customer-service/shipping.html.

The United States Mint was created by Congress in 1792 and became part of the Department of the Treasury in 1873. It is the nation’s sole manufacturer of legal-tender coinage and is responsible for producing circulating coinage for the nation to conduct its trade and commerce. The Mint also produces numismatic products, including Proof, Uncirculated, and commemorative coins; Congressional Gold Medals; and silver, gold, and platinum bullion coins. The Mint’s numismatic programs are self-sustaining and operate at no cost to taxpayers.  ❑