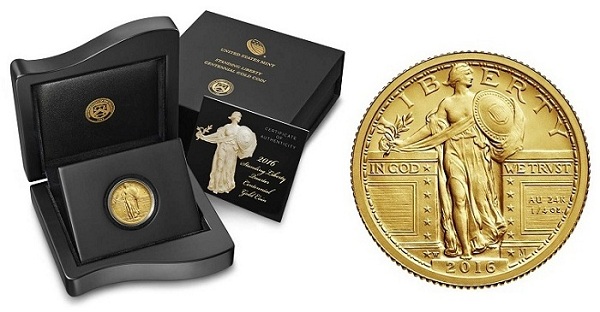 The 2016 Standing Liberty Quarter Centennial Gold Coin was launched at noon yesterday, generating strong interest and provoking slow-downs on the U.S. Mint’s Web site that saw some buyers struggling to complete their purchases for upwards of thirty minutes. Today, the Mint reported that the item posted 47,884 sales on day one, a number kept relatively low by a one-coin-per-household order limit. The coin costs $485 and has been given a mintage limit of 100,000 pieces.

More than 50,000 gold quarters remain in the Mint’s inventory, a marked difference from the quick depletion of stock for the Mercury Dime Centennial Gold Coin after its launch on April 21. That coin went into “Currently Unavailable” status in under 45 minutes. The gold dime had a higher mintage limit at 125,000 pieces, but it was priced lower and had a significantly higher household order limit (10 per customer), which no doubt contributed to item’s quick passage into Unavailable status.

On September 12, Coin Update contributor Louis Golino expanded on this subject with “2016-W Standing Liberty Centennial Gold Quarter: For Collectors, Not Flippers.” The centennial trio will be completed with the release of the Walking Liberty Half Dollar 2016 Centennial gold coin.