Today the U.S. Mint released the 2016 Richard M. Nixon One Dollar Coin Cover, which is available for $19.95 and has a product limit of 20,000 units. The item contains two 2016 Nixon Presidential dollars respectively manufactured on the first day of the coins’ production at the Philadelphia and Denver Mint facilities.

The coins are mounted in a display card that showcases the obverse and reverse of each piece; the outer cover bears a portrait of President Nixon, the dates of the coins’ production, the issue date of the coin cover, and a Red, White, and Blue (Forever) stamp. 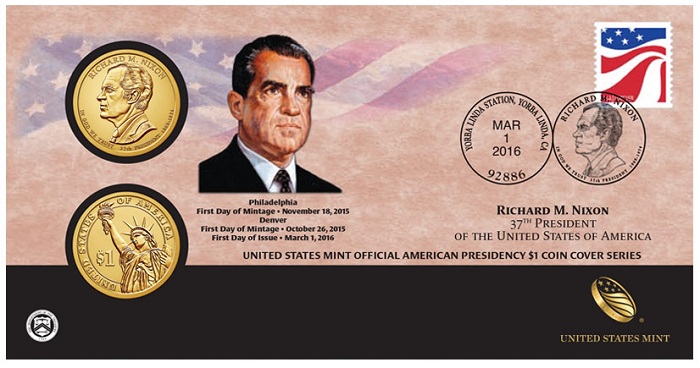 The Richard Nixon Presidential dollar features an image of Nixon on its obverse, with RICHARD M. NIXON inscribed along the top of the design and IN GOD WE TRUST, 37th PRESIDENT, and 1969-1974 displayed at the bottom.

The reverse bears a design common to all Presidential $1 coins; a depiction of the Statue of Liberty is placed beside the coin’s $1 denomination, with UNITED STATES OF AMERICA curving along the rim. Don Everhart designed and engraved both the obverse and the reverse of the coin. 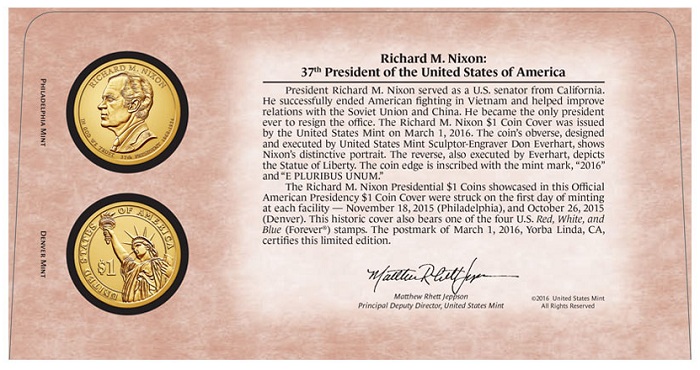 The Nixon coin cover is the 37th release in this product series, which launched in 2007 and will conclude later this year. For more information on the 2016 Richard M. Nixon Presidential One Dollar Coin Cover, please visit the U.S. Mint’s Web site.