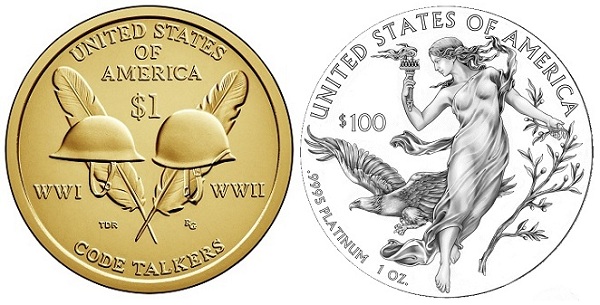 The U.S. Mint’s 2016 product schedule has been updated to include two anticipated items, both of which have been given June release dates. Before today, the only new products due for release next month were rolls and bags of the Harpers Ferry America the Beautiful quarters, but now we can expect the 2016 American $1 Coin and Currency Set on June 16 and the 2015 American Eagle Platinum Proof Coin on June 30.

Coin & Currency Sets have proven quite popular, due in part to their low cost and to the exclusive Enhanced Uncirculated finish applied to the included Native American dollar. Other than its release date, the only product information we have for the new issue is that the $1 coin will carry the San Francisco Mint’s “S” mint mark. The 2015 Coin & Currency Set has sold 88,233 sets of a possible 90,000 a the time of this writing.

The announcement that the 2016 American Eagle Platinum Proof Coin will be released on June 30 is a bit surprising as the Mint has had difficulty procuring a large quantity of platinum planchets lately, a problem that caused last year’s Platinum Eagle to be delayed until December. Last year’s issue sold out its complete 3,881-piece mintage in just 10 minutes, so it will be interesting to see if the Mint aims to increase production to meet demand this time around.