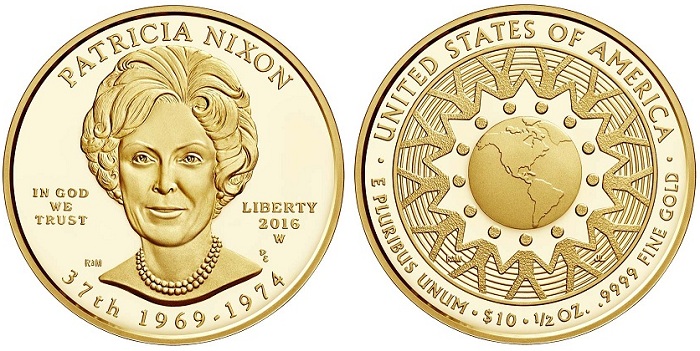 The U.S. Mint released the 2016 Patricia Nixon First Spouse Gold Coins today, February 18, at noon ET. They are composed of one half-ounce of 99.99% gold and have a combined mintage limit of 10,000 coins across Proof and Uncirculated options. There are no household ordering restrictions in place.

The Proof version of this coin has entered the market at $815.00, while the Uncirculated issue costs $795.00. The Mint raised prices on all First Spouse Gold coins by $25 yesterday in response to the rising spot-value of gold, which currently sits at $1,210.10.

The obverse of the Patricia Nixon coin was designed by Richard Masters and sculpted by Don Everhart. It features an image of Mrs. Nixon with the inscriptions PATRICIA NIXON, IN GOD WE TRUST, LIBERTY, 2016, 37th, and 1969-1974 placed in the field near the rim. The West Point Mint’s “W” mint mark is also included. 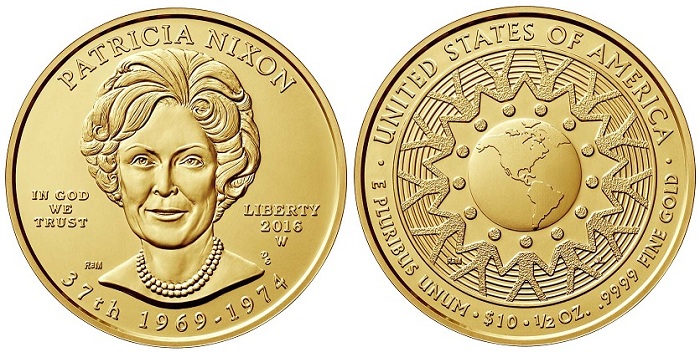 The reverse, designed by Richard Masters and sculpted by Jim Licaretz, carries a depiction of figures holding hands around the world, referencing the First Lady’s efforts to promote volunteerism. The inscriptions UNITED STATES OF AMERICA, E PLURIBUS UNUM, $10, 1/2 OZ., and .9999 FINE GOLD are included along the rim.

These are the first 2016 issues in the First Spouse series, which will also see the releases of coins featuring Betty Ford and Nancy Reagan later in the year. The series was launched in 2007 along with the Presidential dollar program; both will conclude at the end of 2016.

First Spouse Coins currently represent the vast majority of numismatic gold coins readily available at the Mint. 2015’s American Gold Eagles (all versions), Gold Buffaloes, and American Liberty High Relief Gold Coins are all listed as Currently Unavailable on the Mint’s Web page. Even the 2016 Mark Twain gold coins are on back order at the time of this writing. With no other gold coins for collectors scheduled to hit the market until mid-March, it will be interesting to see if First Spouse issues see a spike in demand.