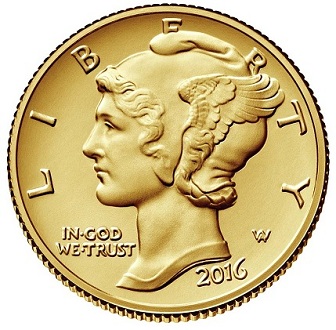 Whenever a popular U.S. Mint numismatic coin sells out quickly, the coin’s launch is quickly followed by post-mortems and widespread discussion in the numismatic blogosphere. Such discussions typically focus on issues such as whether the average collector had a fair chance to obtain the coin; how the Mint could have handled the launch better; and probably most importantly, whether the aftermarket premiums that quickly attached to the coin will hold over time.

The April 21 launch of the Mercury Dime 2016 Gold Centennial Coin fits right in with this trend. The coin went into “back order” status within 20 minutes, and then became “currently unavailable” about 45 minutes after the start of sales.

Most people assumed that the Mint either sold out of the entire 125,000-coin mintage, or at least sold out of the available inventory. Today, April 26, the Mint published a sales total of 122,510 coins, which indicates the full mintage was indeed struck before the coin’s launch.

In addition, a large number of coins have shown up for sale on eBay and elsewhere. Secondary market premiums for the gold dime quickly reached an average of about $300 for coins in original government packaging and even more for examples that grade 70, which are typically in the $400 range for NGC Early Release coins and $450-$500 or more for PCGS First Strike coins. 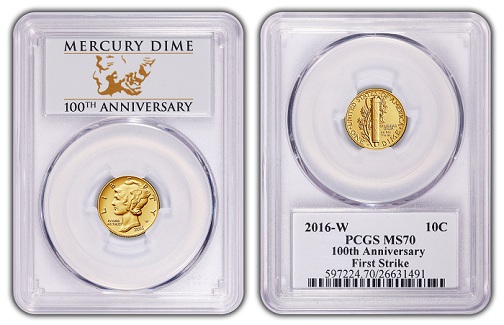 And to an even greater extent than has been the case with other popular modern releases from recent years, many coin dealers began offering pre-orders for 70-graded coins within hours of the launch for delivery when the coins are received back from the grading companies. Moreover, even some companies that in the past have not carried such releases and mostly sell bullion are selling them, which further reinforces the view that many of these coins are in the hands of retail coin sellers.

These factors suggest that a very significant portion of the coins sold on April 21 — which the Mint started shipping almost immediately — went to coin dealers and so-called flippers. This is likely given the rather high household limit of ten coins, the instant sell-out, and the rapidly rising retail premiums, which are as always fueled in considerable part by speculative interest and dealer promotions, especially for 70-graded examples, which are where the real money is.

So based on what we know now, what do these factors suggest about the aftermarket value of the coin going forward?

On the one hand, this coin is undoubtedly in high demand among collectors who love the classic Liberty design, and will likely remain that way since it appeals to both modern and classic U.S. coin collectors and is more affordable than some other popular numismatic releases.

Of the three centennial gold coins, the Mercury dime is the one with by far the most accessible price-point, which means a greater number of collectors could afford it than will be able to afford the other two centennial gold coins coming soon. For these reasons the coin should indeed remain in demand over the long haul like other popular modern issues that reuse classic designs.

On the other hand, there are a number of reasons to be cautious about the current retail premiums on this coin, which look likely to decrease in the short-term as a very large supply of coins comes on the market in the coming weeks and the initial feverish demand subsides. 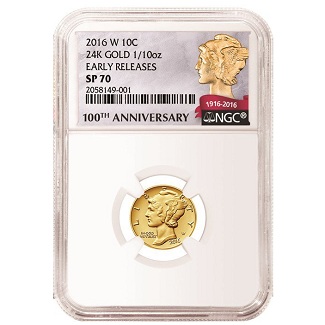 In addition, prices not only for raw coins but especially for graded ones are likely to be highly volatile as the market sorts out what the coins are really worth. Paying high premiums for 70-graded pieces early on is a risky gamble for most issues since the true value of those coins will not become apparent until we know what percentage of coins received the top grade and have a longer track record of sales.

Since dealers who are currently promoting the gold dime have a financial interest in them, it seems more useful to see what those who are in a position to be candid think about the market prospects for the new dime.

The 2014-W Kennedy gold half dollar may offer some indication of how the gold dime will perform despite the obvious differences, including the disparity in the immediate aftermarket values of the two coins and the fact that the Kennedy coin was an odd weight at ¾ of an ounce. Time will tell whether it is an apt comparison, or whether other coins, especially the 2009 Ultra High Relief double eagle that has held its value despite a large mintage, are more appropriate for providing perspective.

Barry Stuppler, a former ANA president and veteran coin dealer, compared the gold dime to the Kennedy gold half and cited five reasons why he is not recommending the coin to his clients and does not believe it has good investment potential:

The coin is a specimen.* Specimens are not normal Mint State or Proof coins, which means specimens are typically not as popular with collectors or dealers unless they are part of a series.

The coin is not part of an on-going collection. It is a special modern commemorative, which are not popular.

Future pricing/market support for special modern commemoratives historically has not been good. An excellent example is the 2014 Gold Kennedy Half Commemorative, which I called a disaster and was available at half the initial price within six months [he is referring to ANA show release-graded pieces -LG].”

Mr. Stuppler also indicated that his company will sell the gold dime later after the quarter and half dollar centennial issues are released and the price of the dime has settled. 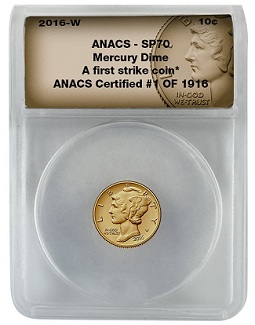 Another perspective was provided by modern coin expert Eric Jordan, author of Modern Commemorative Coins and co-author with John Maben of Top 50 Most Popular U.S. Coins, who said:

“I think the best reference point for these coins is the 2008 $5 Gold Buffalos. Their mintage was sub- 20,000 coins and they were/are popular almost to the point of having a cult following. So even if you add up the mintage of the mint state and Proof $5 Gold Buffalos they are at least three times as rare as the $5 Gold Mercury. The new Gold Mercury is a fine coin and its likely to get promoted, but if you want some idea of where the ceiling may be once the speculation washes out of the market I would go look at the current market prices for the small Gold Buffs; look at the relative mintages, and draw your own conclusions.”

Mr. Jordan’s comparison with the 2008-W $5 gold American Buffalo coins seems very apt given the fact that it is struck on the same-sized planchet as the gold dime**, and since both coins reuse classic designs from the same period (the Buffalo design was introduced in 1913). The main difference is that the Buffalo issue in mint state has 14% of the mintage of the gold dime (17,429 coins).

A third view was provided by Ian Russell, president and CEO of Great Collections, an online auction company that sells a lot of modern U.S. issues: “There is routinely a lot of interest in the first few days, while major dealer and wholesalers balance their positions. Sometimes, like the 2009 Ultra High Relief, there is constant demand (that continues to build), and I think this is one of those coins. I can see all Mercury dime collectors wanting one. It’s a low price point compared to many other recent gold coins (like the JFK, High Relief, and so forth). I don’t have any of mine back from grading yet, but I hear the grade percentage (percentage that grade 70) will be very high. It should mean some great buys while excess is on the market.”

Lessons From the Launch

The launch of the 2016 gold dime also provides some lessons on how such releases could be better handled in the future.

There are two key issues: whether the household limit was too high, making it that much more difficult for the average buyer to obtain a coin, and the Mint’s current practices with respect to declaring coins “unavailable” and “sold out.”

With respect to the household limit, there is probably no way to make everyone happy. Collectors would mostly prefer a limit of one at least for an initial period, but we saw with the Presidential dollar Coin and Chronicles sets last year that very low household limits can still result in extremely quick sell-outs.

A limit of ten does favor retail sellers and flippers since the average collector is not likely to want that many coins for themselves. A lower limit would appear appropriate, something between perhaps two and five units for a release with high demand like this one, which would allow for a wider distribution of the coins, yet avoid the frenzy of a one-coin per order limit.

The other issue is the lack of certainty regarding when a coin is actually sold out as opposed to temporarily unavailable, which has been an ongoing issue with the new retail web site and order management system the Mint implemented a couple of years ago.

Under the previous system coins were declared sold out much sooner than they are now. With the current system, it is often not at all clear whether the coin will remain unavailable and then be declared sold out, sometimes months later, or if more inventory will be made available.

Buyers are making important decisions about how much to pay for coins on the secondary market on the basis of information that in some cases turns out to be incorrect or incomplete, such as when the 2014 First Spouse medal sets seemed to be sold out and then reappeared later.

It would help facilitate greater transparency in the market for U.S. Mint coins if the Mint could notify buyers a bit more quickly about sell-outs based on accurate and timely information on inventory levels and sales.

The 2016 Mercury Dime Centennial Gold Coin will likely remain a collector favorite for many years to come and retain a premium over issue price, but if you were unable to obtain a coin from the Mint, it may be worth waiting a while for secondary market premiums to decrease before adding the coin to your collection. And, as Mr. Russell pointed out, there may some bargains to be had when prices come down.

*NGC and ANACS have designated the gold dime as a Specimen (SP), while PCGS is designating them as Mint State coins.

**As one collector noted recently on Mint News Blog, the three 2016 gold centennial coins are apparently going to be struck from the same size of planchets as the 2008 Buffalo fractional gold coins.