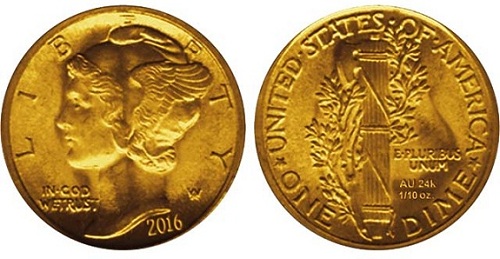 The U.S. Mint has kept its cards close its chest this year with regard to the release-dates of some of 2016’s most anticipated items, but we now know when to expect the arrival of the first of three coins re-imagining classic 1916 circulation designs in gold. The 2016 Mercury Dime Centennial Gold Coin, which will be composed of 1/10 oz. of 99.99% pure gold, will be released on Thursday, April 21.

The Mercury dime, also known as Winged Liberty, was designed by Adolph A. Weinmen. It’s obverse features an image of Liberty facing left and wearing a winged cap; Liberty’s resemblance in this design to the Roman god, Mercury, led to the issue being nicknamed the “Mercury dime.” Other 1916 centennial gold coins expected this year include 1/4 oz. Standing Liberty quarter and the 1/2 oz. Walking Liberty half dollar.

The new Mercury dime’s release will come at the end of an eventful month for the Mint. As noted on Mint News Blog, the Mint is currently running low on inventory for its gold and silver collector coins, due in part to the delayed releases of 2016-dated versions of its most consistently popular products, such as numismatic Silver Eagles. But next week’s release of the 2016 American Eagle gold Proof and Uncirculated Coins will kick off a busy few weeks that will also see the releases of the National Park Service gold, silver, and clad commemorative coins.

Pricing and mintage information for the 2016 Mercury Dime Gold Coin is not yet available. Release dates for the gold Standing Liberty quarter and the gold Walking Liberty half dollar have also not been established, but Coin Update will post more details as they emerge.