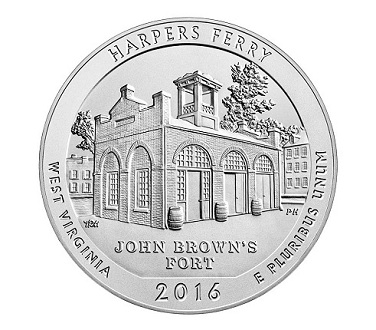 The U.S. Mint has shared its first-day sales total for the 2016 Harpers Ferry 5 oz. Silver Uncirculated Coin, released yesterday, July 15, at noon ET. The new issue sold 14,141 units on the day of its launch, a tally similar to those posted by the Shawnee and Cumberland Gap 5 oz. Uncirculated coins earlier this year.

Demand for the Harpers Ferry coin fell between what we saw for the previous 2016 issues, with the Shawnee coin opening at 14,369 sales and Cumberland Gap posting 14,062. Since its debut in February, the Shawnee issue has added 3,646 sales to arrive at 18,015, while the Cumberland Gap coin now shows 16,723 units sold, an increase of 2,661 pieces since it launched in May.