The Uncirculated American Silver Eagle (ASE) is the collector version of the bullion ASE, which is sold through Authorized Distributors rather than directly to the public by the Mint. Struck on burnished blanks, this .999 fine Uncirculated silver coin has a finish similar to its bullion counterpart but carries the W mintmark, indicating production at the U.S. Mint at West Point. Each coin is encapsulated and placed in a blue presentation case. A certificate of authenticity is included.

This year marks the 30th anniversary of the Mint’s production of this coin. Its obverse features Adolph A. Weinman’s full-length figure of Liberty in full stride, enveloped in folds of the flag, with her right hand extended, and branches of laurel and oak in her left. (This is the famous Walking Liberty design that debuted on half-dollar coins in 1916, which was honored this year with the Walking Liberty Half Dollar Centennial Gold Coin.) The inscription 30th ANNIVERSARY is incused into the edge of the coin. 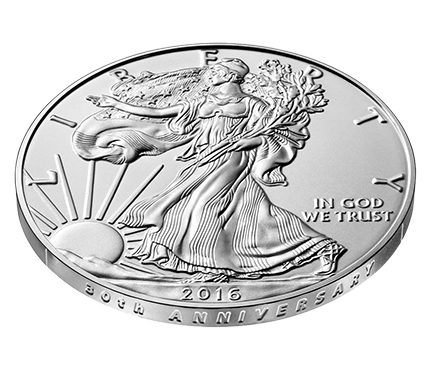 The coin’s reverse, by former Mint sculptor-engraver John Mercanti, features a heraldic eagle with shield, an olive branch in its right claw and arrows in its left.

The current price of the coin is $44.95. However, as with all products sold by the Mint containing precious metals, pricing is subject to change. There is no household order limit and no mintage limit for this product.

The United States Mint was created by Congress in 1792 and became part of the Department of the Treasury in 1873. It is the nation’s sole manufacturer of legal tender coinage and is responsible for producing circulating coinage for the nation to conduct its trade and commerce. The Mint also produces numismatic products, including Proof, Uncirculated, and commemorative coins; Congressional Gold Medals; and silver, gold, and platinum bullion coins. The Mint’s numismatic programs are self-sustaining and operate at no cost to taxpayers.  ❑

Uncirculated ASEs for 2016 and earlier are available at APMEX.
Share: