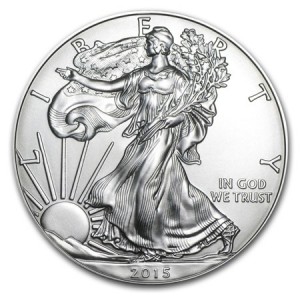 The U.S. Mint struck a record number of American Eagle Silver bullion coins this year and now, less than two days after a final allocation of 1,130,000 ounces was released, all of the coins have been acquired by the Mint’s authorized purchasers. There will be no more 2015 silver bullion issues struck or sold by the Mint.

The Mint sells its bullion issues to a network of authorized buyers, who then make the coins available to the public. Next year marks the 30th anniversary of the issues, which were introduced in 1986.

American Eagle one-ounce silver bullion coins carry a denomination of one dollar; however, the value of investor coins is tied to their weight in silver, which is currently $13.74 per ounce according to the London Bullion Market Association.

As noted on Mint News Blog, recent legislation has led the Mint to announce that 2015 American Eagle Proof and Uncirculated coins will not be sold after noon on December 30. The Proof issue is currently on Back Order at the Mint’s Web site.

The U.S. Mint will begin selling 2016 issues of the American Eagle Silver bullion coin to authorized purchasers on January 11.