The Bombay Hook America the Beautiful 5 oz. Uncirculated Coin has been greeted by strong sales since its release last Thursday. As of this writing, the coin sold 14,571 of a total 20,000-piece mintage. That puts it just 2,678 sales behind the Blue Ridge Parkway 5 oz. Uncirculated issue, which was released back in early July. 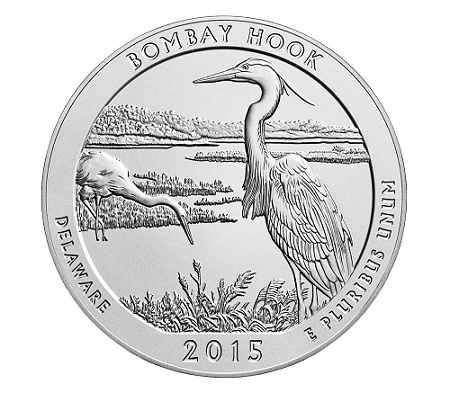 Demand for this item has been supported by its relatively low mintage limit, which increases the odds that the coin will sell out in a timely fashion. Recent issues of ATB 5 oz. Uncirculated coins have all had 30,000-piece mintage limits and have typically been available for long periods of time. For instance, the 2014 Everglades National Park 5 oz. coin just sold out three weeks ago, while the 2014 Great Sand Dunes National Park issue in still holding on as “Currently Unavailable” at the U.S. Mint.

One interesting exception to the above logic is the 2015 Blue Ridge Parkway 5 oz. Uncirculated coin, which has sold 17,249 of a possible 30,000-unit mintage, yet is already “Unavailable” at the Mint. This is because the Mint sets an overall limit of 65,000-coins for both Uncirculated and bullion issues of the coin, and is authorized to assess demand and mint more bullion issues, as long as the total for all coins sold does not exceed 65,000. Since the Mint opted to sell 45,000 Blue Ridge Parkway 5 oz. bullion coins, only a total of 20,000 Uncirculated issues may be issued, despite the coin’s initial 30,000-unit mintage limit.

The Mint provided Coin Update with a chart detailing current sales totals for bullion and Uncirculated issues of the 2015 America the Beautiful 5 oz. silver coins; you can peruse it below.

The Bombay Hook design is the fourth of five America the Beautiful designs to be issued this year. Products featuring Saratoga National Historic Park in New York, the final ATB issue in 2015, will be released from November 30 into the first week of December.

For more information on the America the Beautiful program, visit the U.S. Mint’s Web site.