Wednesday was another jam-packed day at the ANA World’s Fair of Money. The morning got under way with a quick breakfast at the hotel, and then Caitlyn and I jumped into the Barber Coin Collectors’ Society meeting at 9:00. If you’re looking for a great hobby club to join, check them out at www.barbercoins.org. The BCCS is an active club under the guidance of President John Frost, Vice President Carl Feldman, Secretary/Treasurer Dave Earp, and a team of regional leaders. The Society’s journal has an attractive and high-quality new format, its Web site is being upgraded, new membership and publicity efforts are in the works, and overall energy is high. It’s an exciting time to be a collector! I joined the club this year, and in the next issue of the BCCS journal you’ll find my article on “How to Get a New Variety Into the Red Book.” Join the Society today for $15 and you can read all about it in a few weeks. (I also plan on writing an article on a neat Barber dime love token I bought recently.) Dave Bowers and I talked a bit about his soon-to-be-released new book, A Guide Book of Barber Silver Coins, and Dave introduced the group to Caitlyn Trautwein (Whitman’s senior associate editor), noting that “Caitlyn could go to the New York Times and do the work of three editors!” 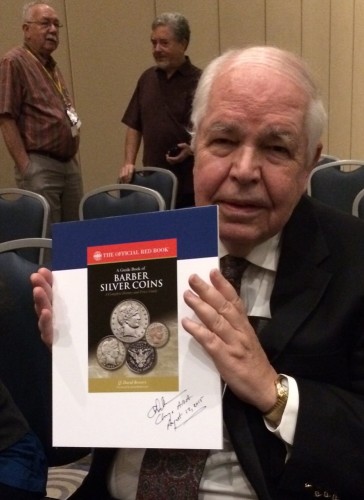 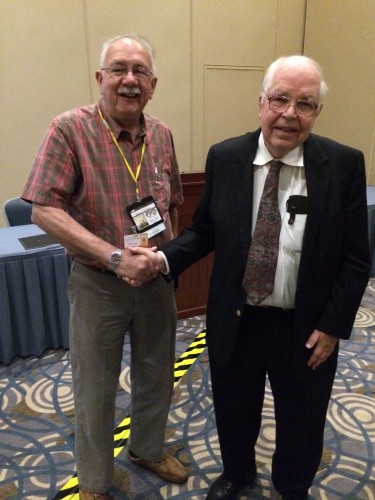 BCCS past president Phil Carrigan (left) was presented with an award for more than 20 years of friendship and leadership of the group. Here, Dave Bowers congratulates Phil.

Another hobby group that could use a few good Barbers is the Society of Bearded Numismatists. The SOBs held a rollicking romp at the World Mint Stage Wednesday afternoon. Everyone got one or more “bearded coins” from the 1800s or early 1900s as a free souvenir of the meeting. The presentations were entertaining — although they got a bit hairy with biographies of notable, famous, and infamous beards throughout history. Then the eminently bearded David T. Alexander gave fascinating sidebar commentary to a show-and-tell discussion of several Society of Medalists creations. The medals were from the American Numismatic Association archives.

The Society of Bearded Numismatists meeting featured plenty of both. 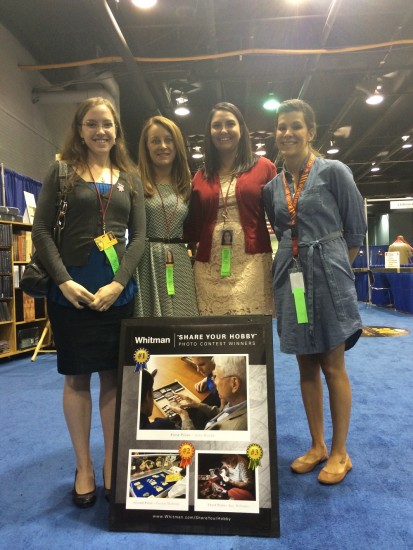 Caitlyn, Mary, Tabitha, and Michelle at the Whitman booth, with the first-, second-, and third-prize winning photographs from the Whitman Publishing “Share Your Hobby” Photo Contest. 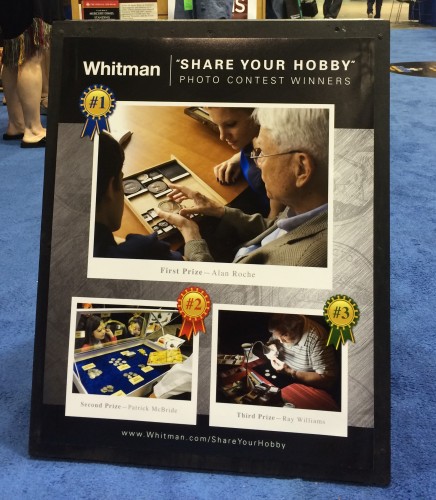 Congratulations to Alan Roche, Pat McBride, and Ray Williams on their winning entries!

Back at the Whitman Publishing booth I had a nice chat with John K., an enthusiast of the 1982 “No P” dime, which is ranked among the 100 Greatest U.S. Modern Coins. John feels that a hole for the coin should be included in Whitman’s folders and albums for Roosevelt dimes. What do you think? 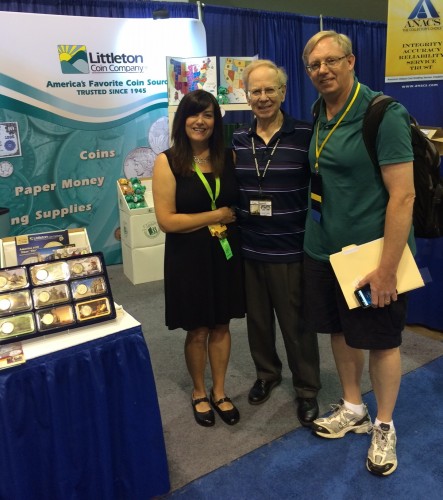 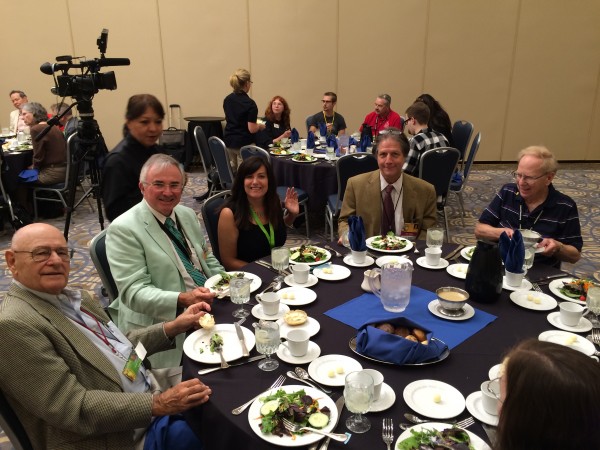 The Sundman Lecture Series luncheon — a relaxing, delicious, and entertaining break from the hubbub of the bourse. 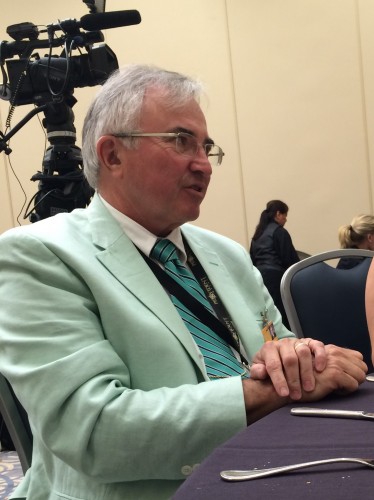 David Sundman, a sponsor of the Lecture Series named for his late father, the famous stamp and coin dealer Maynard Sundman. Dave is president of Littleton Coin Company, and also a Whitman author. He co-wrote 100 Greatest American Currency Notes with Q. David Bowers.

I trotted around the bourse talking with collectors, dealers, researchers, and other great hobbyists. If you see me at an ANA show, feel free to say hi and strike up a conversation.

The Sundman Lecture Series is a popular event held annually at the World’s Fair of Money, and its sponsored luncheon is a nice meal that attracts friendly and interesting numismatists from all walks. If you didn’t make it this year, definitely put it on your calendar for 2016. You learn as much sitting down and breaking bread with fellow collectors for an hour as you do walking the bourse for a day.

Come to the ANA for the coins and currency, stay for the camaraderie. There’s never a dull moment at the World’s Fair of Money! 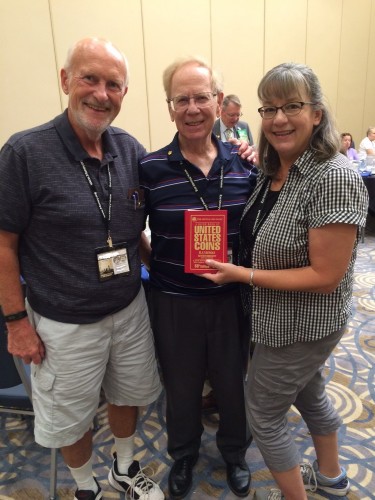 Red Book Senior Editor Ken Bressett is always happy to autograph your coin books! And on top of that he’s one of the nicest guys in numismatics. 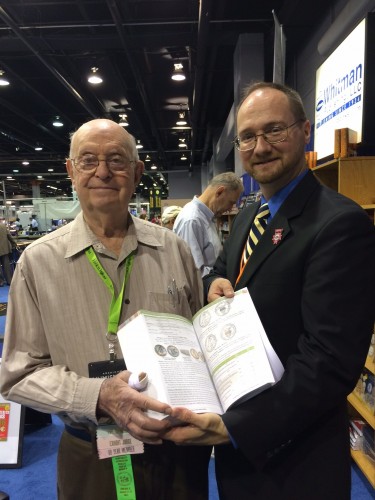 One of the best parts of my job as publisher at Whitman: keeping in touch with hobby legends like Neil Shafer. Here we are with the newly expanded U.S./Philippine coinage section of the Deluxe Edition Red Book. Neil “wrote the book” on Philippine coins — literally — with his classic United States Territorial Coinage for the Philippine Islands, published by Whitman in 1961 and still a standard reference today. 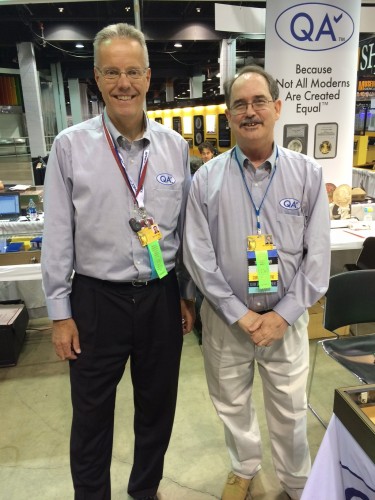 It was nice to catch up with Eisenhower dollar expert Jim Sego and die-variety connoisseur Mike Ellis. Mike is the editor of the new sixth edition, volume I, of the Cherrypickers’ Guide, which covers half cents through nickel five-cent pieces. A lot of collectors have been asking about this book. It comes out in a few weeks! (Mike will be hounding Jim for Ike dollar information for the next volume of the CPG, which is already under way.) 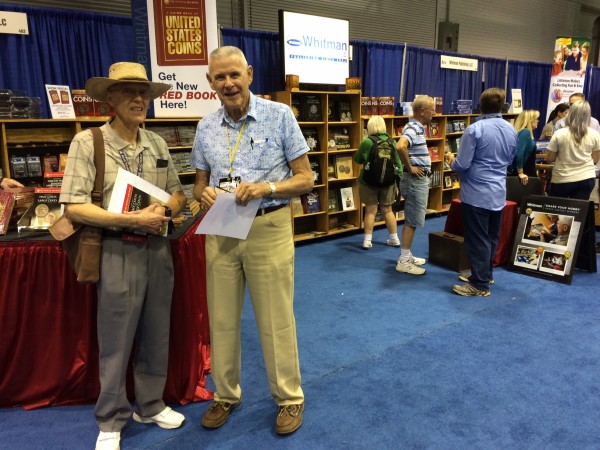 Another legendary cherrypicker: Bill Fivaz (right), coauthor of the Cherrypickers’ Guide, visited with journalist and book reviewer Mike Thorne of COINage Magazine at the Whitman booth.

Dennis Tucker is the Publisher at Whitman.