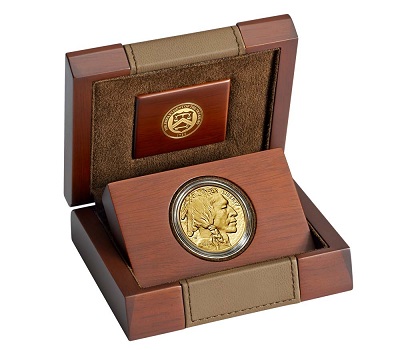 The 2015 American Buffalo One Ounce Gold Proof Coin has entered “Unavailable” status at the U.S. Mint. This means that while small batches of this item are likely to be released periodically in the near future, the Mint is entering into a period of considering final strikes and fielding returns as it takes stock of remaining inventory.

The 2015 American Buffalo Proof Coin was released on April 9 and has sold 15,937 pieces so far, according to the most recent sales report. The coin does not have limits placed on orders per household or on its overall mintage.

The 2015 American Buffalo Gold Proof Coin is a collector version of the American Buffalo gold bullion issue and was the first 24-karat gold coin of .9999 fineness made available by the U.S, Mint. The designs of both the obverse and the reverse were originally created by James Earle Fraser for inclusion on the 1913 Type 1 Buffalo Nickel.

The Mint’s gold coins have been selling well lately, due perhaps in part to the fact that slouching gold prices are making them more affordable. The U.S. Mint’s pricing table for gold coins can be viewed here.

Correction: This article originally stated that the American Buffalo is the only .9999 24-karat gold coin available from the Mint. The text has been corrected to reflect that it was the first such offering.