On October 4, 2011, the Perth Mint began sales of the 2012 Australian Kangaroo Gold Bullion Coins. Struck in 99.99% purity, these coins are available in sizes ranging from 1/10 ounce to 1 kilogram. 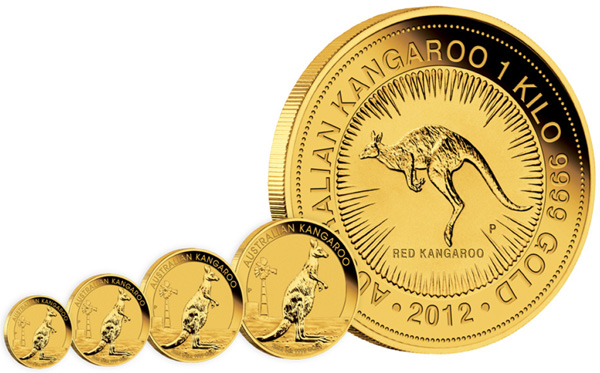 The new reverse design for the 1/10 ounce to 1 ounce size coins features the image of a kangaroo with a bush scene and windmill in the background. The Perth Mint’s “P” mint mark appears along with inscriptions “Australian Kangaroo”, the date “2012”, the size, and the purity “9999 gold”.

The Gold Kangaroo has been offered by the Perth Mint of Australia since 1989 with a different reverse design featuring the kangaroo for each year. The series was previously known as the Gold Nugget, which featured famous Australian Gold Nuggets from 1986 to 1989.