The Royal Australian Mint has released the 2011 Kangaroo at Sunset $1 Silver Proof Coins.  The simple, but striking design by Wojciech Pietranik  features a kangaroo crossing the red soil plains against a setting sun. The scene captures the raw beauty and isolation of the Australian outback. 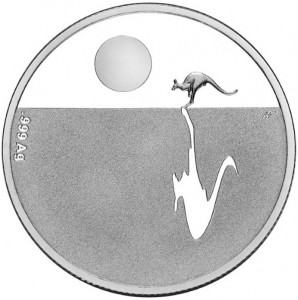 The design was first used on $25 gold proof coins released in 2007. At the time, the limited mintage of 1,000 pieces sold out within four days of release. The same design was later released on $1 silver coins.

The 2011-dated Kangaroo at Sunset Silver Proof Coin is limited to a mintage of 5,000 pieces and has an ordering limit of two coins per customer. Each coin is struck in 99.9% silver with a weight of 6.03 grams and diameter of 21.69 mm.

Pricing for the coins listed on the Royal Australian Mint’s website is AUD$65.00 with GST or AUD$59.09 for international orders. Visit the product page for ordering and additional details.