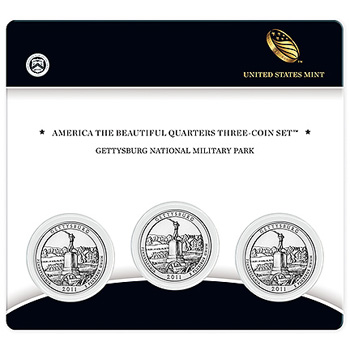 The Gettysburg Quarter features the 72nd Pennsylvania Infantry Monument, which is located on the battle line of the Union Army at Cemetery Ridge. The coins were first issued for general circulation on January 24, 2011. Additionally, the quarters have been available in various numismatic products offered by the US Mint released throughout the year.

The three coin set includes uncirculated versions of the coin from the Philadelphia and Denver Mints and a proof version of the coin struck at the San Francisco Mint. The coins are mounted on a durable plastic display card with issuance information and a certificate of authenticity on the back.

The 2011 Gettysburg National Military Park Quarter Three Coin Set is priced at $14.95 and may be ordered from the United States Mint online at http://catalog.usmint.gov. The Mint also offers a subscription program to receive future releases for the product type as they become available.