Today the United States Mint unveiled the reverse design for the 2010 Lincoln Cent. The announcement came during the official launch ceremony for the fourth 2009 Lincoln Cent design, held today in Washington DC.

Under Public Law 109-145, the United States Mint issued four different reverse designs for the 2009 Lincoln Cent in celebration of his bicentennial. Each design represented a different stage in Lincoln’s life. The designs depicted his birthplace and childhood in Kentucky, formative years in Indiana, professional life in Illiniois, and Presidency in Washington, DC. The same law also provided for another reverse design to be used for Lincoln Cents issued after 2009, which is emblematic of Lincoln’s preservation of the United States as a single and unified country. 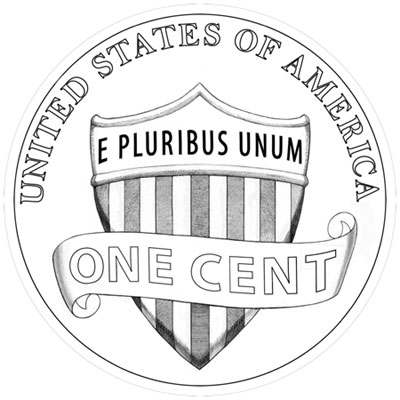 The new design features a union shield with a scroll draped across. The shield has thirteen vertical stripes bound by a horizontal bar, meant to symbolize the thirteen original states joined in one compact union. The union shield, which dates back to the 1780’s, was used widely during the Civil War and appears in the halls of the U.S. Capitol Building on frescoes by Constantino Brumidi, the artist at the Capitol during Lincoln’s presidency.  The motto “E Pluribus Unum” appears on the bar of the shield, the denomination “One Cent” appears on the scroll, and “United States of America” appears above. The reverse was designed by Lyndall Bass and sculpted by Joseph Menna.

The obverse of the coin will feature a portrait of Lincoln designed by Vincent D. Brenner. This design has been used for the one cent coin since 1909 with some minor alterations over the years. Starting in 2010, the US Mint will restore the obverse design to a closer rendering of the original version issued in 1909.

The new designs will be used for the 2010 Lincoln Cent and for the foreseeable future.