Continuing the coverage of the recently unveiled 2010 bullion coins from the Perth Mint is the 2010 Silver Kookaburra coins. The coins are struck in 99.9% silver and available in three different bullion weights. 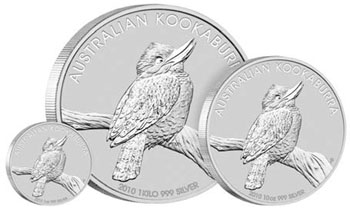 The Silver Kookaburra has been issued by the Perth Mint since 1990. Each year the coin features a different reverse design depicting the Kookaburra. This bird is synonymous with the Australian bush and known for its distinctive call, which sounds like human laughter.The coins are legal tender under the Australian Currency Act of 1965.

The 2010 Silver Kookaburra features the bird perched on a branch with beak turned skyward against a plain background.The inscriptions include “Australian Kookaburra”, the date “2010”, the weight, and the fineness “999 Silver”. The obverse of the coin features Queen Elizabeth II with the inscriptions “Elizabeth II”, “Australia”, and the denomination.

Sizes available include 1 ounce, 10 ounce, and 1 kilo. The most popular one ounce size will have a maximum mintage of 300,000 coins. The coins have been available worldwide since September 1, 2009.