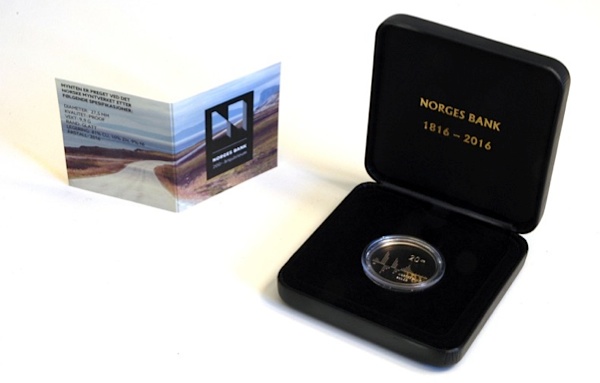 The Norges Bank has issued (June 14) a new commemorative coin to mark the 200th anniversary of the establishment of its own institution. It was on June 14, 1816, that the country’s own independent Central Bank was established. With the adoption of a new constitution in 1814, the creation of a new Central Bank seemed necessary to aid the increase of a growing economy.

Norway would not obtain full independence from the crown of Sweden for another 89 years, in November of 1905. Prince Carl of Denmark (1872 – 1957) had been elected as King and acceded to the new Norwegian throne as Haakon VII. At this time, the monetary unit of Norway was the familiar speciedaler, or rixdollar, which was divided into 120 skillings, or five “rigsort” of 24 skillings each, a complicated system held over from their union with Denmark.

In 1897, the Norges Bank was relocated to Kristiania, a district in Central Oslo, with new headquarters being built in 1906 on Bankplassen. The building was sufficient to accommodate as many as 80 employees, including the staff for the bank note printing plant. Another significant and crucial move for the Bank occurred in 1940, when during the Second World War the Norges Bank was temporarily moved to London.

Today, the Norges Bank, together with an executive and advisory board, implements monetary policies and promotes robust and efficient payment systems and financial markets. The Norges Bank employs almost 600 employees and manages both the country’s foreign exchange reserves and the Government Pension Fund Global. The Norges Bank continues to be the sole issuer of legal tender coin and bank note currency, the Krone, with the Mint Supervisory Authority and the Royal Norwegian Mint having been transferred from the state to Norges Bank since 1962. 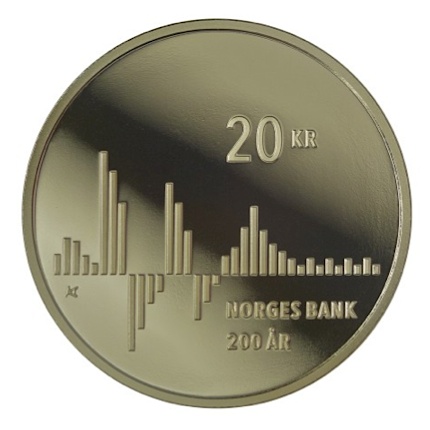 The design represents a stylized illustration of inflation and deflation in Norway through the ages, while allowing expression of the central bank’s goal of promoting economic stability. The denomination 20 KR is located to the right of the primary design with the text NORGES BANK 200 ÅR divided into two lines and located below to the right. The artist’s signature (KA) is located at the bottom left. 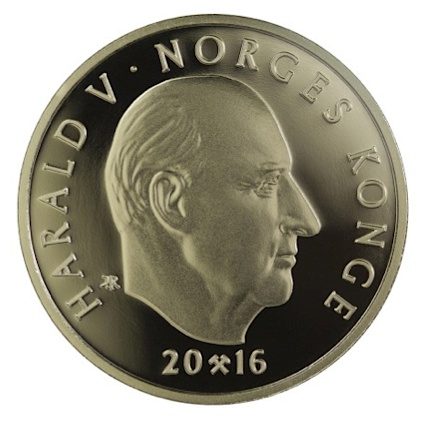 The obverse includes an effigy of HM King Harald V created by Ingrid Austlid Rise, designer at the Norwegian Mint, where the coin is produced.

The 200th anniversary of the Norges Bank commemorative coin is available in Proof quality in a presentation case; a final mintage has not yet been determined. The anniversary coin will also be issued in circulation quality later in the year.

For more information on this and other coins offered by the Norges Bank, please visit their Web site. Sales from the Norges Bank direct are dispatched only to Norwegian destinations. Additional information can be obtained from . Coin images courtesy of the Mint of Norway.