Today marks the official release date of the US Virgin Islands Quarter. This is the fifth release of this year’s District of Columbia and United States Territories Quarters Program. 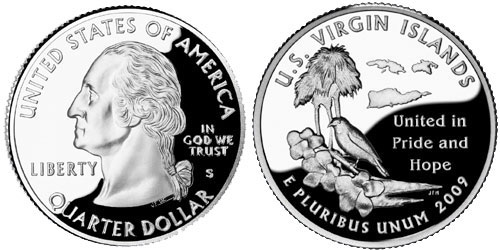 The reverse design of the coin featuers an arrangement of tyre palm trees, yellow elder flowers, the banana quit bird, and outline of the islands, and the territory motto United in Pride and Hope. The reverse was designed and sculpted by Joseph Menna. The obverse of the coin features a portrait of George Washington as designed by William Cousins after John Flanagan.

There have been three reviews of the coin posted on Coin Review, which are included below. The reviews are somewhat mixed with an average design rating of 3 out of 5, and an average overall rating of 2.66 out of 5.

Despite being a “collection of items” design, I think the US Virgin Islands Quarter has an overall pleasing appearance. This is my second favorite of the 2009 quarters, after the Puerto Rico Quarter. The bird, flowers, palms, and territory motto are arranged in a balanced and logical fashion. (Compare to the South Carolina Quarter where similar items are just plopped onto an outline of the state.)

The one thing that bothers me is the outline of the three islands above. Every time I look at the coin, I want to think that these are clouds in the background of the palms.

Long term, I think all of the Territories Quarters will have some investment potential because of the lower mintages and current low profile status.

Design is much better than some of the other offerings in 2009. It’s a low standard. How many americans will look at the back of this quarter and think it’s a foreign coin?

Yet another uninspired coin that has been added to the States Quarter series. I’ve been disappointed more often than not in this long lives series, and I’m sure most collector’s will be happy to see it end.

What is your opinion of the US Virgin Islands Quarter? Post your ratings and comments on Coin Review!