Today, September 3, 2009, the United States Mint will begin selling the 2009 Sarah Polk First Spouse Gold Coin. This is part of the series created to honor the First Spouses of the the Presidents in the order of the Presidency. 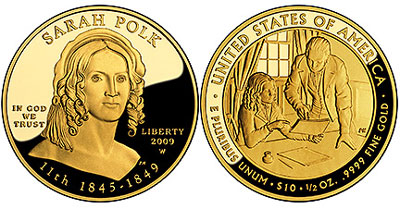 The Sarah Polk coin features her portrait on the obverse and a depiction of her working with her husband James K. Polk on the reverse. She had devoted much of her married life to supporting her husbands political career. Both the obverse and reverse designs were created and executed by Phebe Hemphill.

The coins are available in either uncircualted or proof version. Each coin contains one half ounce of 24 karat gold and is produced at the West Point Mint with the “W” mint mark. Overall production of the coins is limited to 40,000 pieces.