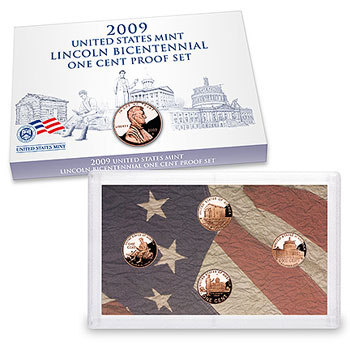 To celebrate the Bicentennial of Abraham Lincoln’s birth, four different designs are being used on the 2009 Lincoln Cent. Each design is representative of a different stage of his life. The four designs feature his Birthplace in Kentucky, Formative Years spent in Indiana, Professional Life spent in Illinois, and his Presidency in Washington, DC.

The proof cents are also struck in a special composition of 95% copper and 5% tin and zinc. This is the same composition used when the Lincoln Cent was originally introduced in 1909. The composition is being used for certain Lincoln Cents included in US Mint issued sets.

The US Mint has priced the 2009 Lincoln Bicentennial Proof Sets at $7.95 each, with an ordering limit of five sets per household.