The 20th century numismatic history of Germany is extremely interesting and could provide material for dozens of articles on its coins, bank notes, and monetary policy. Two World Wars, hyperinflation, occupation by its former allies and enemies, and a division and subsequent unification have provided a fascinating picture of a country and its people. In this article we will take a look at just one item from that turbulent history: the 1960 & 1963 “Emergency” or reserve issues of West Germany.

After the German division following World War II, both West (Bundesrepublik Deutschland, or BRD) and East (Deutsche Demokratische Republik, DDR) had their own monetary policy, with each nation issuing coins and bank notes denominated in Deutsche Mark, or DM. Prior to 1960, various different bank notes were in circulation in West Germany (issued by the Bank Deutscher Länder, the Bank of the German States). Some were printed in Germany, others in the United States; certain issues released in West Berlin were overprinted, stamped, or perforated with a “B”, but were valid in all of West Germany. These notes replaced various bank note issues that were put into circulation after World War II.

In 1957, the Bank Deutscher Länder became the Deutsche Bundesbank, or German Central Bank, and preparations were made to issue a new series of notes that would replace both series in circulation at the time. Dated January 2, 1960, these notes would be placed in circulation at various dates during the first half of the 1960s, starting with the 20 mark in 1961. Later followed the 5, 10, 50, 100, 500, and 1,000 mark denominations.

The basic design of the issues included the portrait of a famous German on the right side of the front, based on original paintings, and various vignettes on the back, ranging from violins to castles. Virtually all denominations known were dated 1960, 1970, 1977, or 1980 (no 1,000 mark note dated 1970 was issued), but various individual varieties are known for each date. This series, known as the first Bundesbank issue, would continue to be printed until after German unification, and would not be replaced by a more modern Bundesbank issue in the early 1990s. 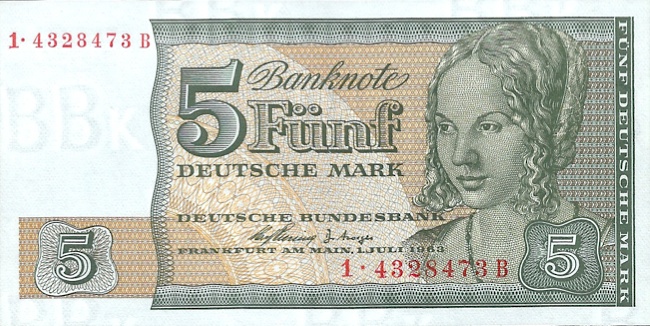 While these would be the only notes one would see in circulation in Germany, there were two other issues prepared. The first was prepared for West Germany outside of Berlin and is dated July 1, 1960. This series, of a different but similar design to the issued notes, contains 10, 20, 50, and 100 mark notes, designed by Max Bittrof. A second series, dated July 1, 1963, was printed for West Berlin and includes the 5, 10, 20, 50, and 100 mark notes, designed by Rudolf Gerhardt. Both series were printed as emergency issues in case the Cold War warranted a sudden currency reform. Their designs were similar to the issued notes (so that the public would accept them), but different enough that they could be quickly distinguished from the circulating notes that would have been declared defunct.

About 29 billion German marks of both of these emergency or reserve notes were printed in the 1960s and early 1970s. For the next 25 years, they would be stored in two underground bunkers, one in Frankfurt and the other one in the small town of Cochem, a quiet town of less than 5,000 located in the Rhineland. The reserve notes meant for Berlin (about 4 billion marks worth) were stored in Berlin at the Central Bank.

More is known of the bunker in Cochem. It was located at Brauselaystraße 5-7, in a quaint residential area, unknown to anyone nearby, with the entrance disguised over a normal house. Thirty meters (100 feet) under the house was an impregnable concrete bunker of 8,700 square meters (93,000 square feet), containing 300 meters (1000 feet) of tunnels. Not even the local authorities knew the purpose of the bunker, and only three people outside of the German Central Bank knew of its existence: a manager, a technician, and a cleaning lady.

The bunker could generate its own energy, and in case of a nuclear war it could shelter 175 people for 14 days. The Cold War, however, came to an end, and by 1988 there was no more need for the notes, which remained in storage in Frankfurt, Cochem, and Berlin. Sometime in 1988 or 1989 the notes were ordered to be destroyed. This should have been the end of the story, but it only gets more interesting.

In the 1990s some 5 mark notes of the West Berlin series appeared on the numismatic market. The notes, all in pristine Uncirculated condition, appeared to have been stolen by somebody at the time they were supposed to have been destroyed. Very little if anything is known about the exact circumstances, but the “release” of these unissued notes was obviously not approved by the German Central Bank, which had managed to keep much of the notes secret for over 25 years (it was known that a reserve issue had been prepared in the 1960s, but exact circumstances were not known, and even the bunker in Cochem remained off limits for years after the end of the Cold War).

A total of 20,500,000 notes were printed of this denomination in three print runs and stored at the Central Bank in Berlin. Judging by the serial numbers of the notes that have appeared on the market, it appears that a “brick” of 1,000 notes was stolen, with the serial numbers ranging from 1•4328000B to 1•4328999B (the suffix “B” is standard for this print run, although “A” and “C” suffixes and replacement notes with a “Y” suffix were printed as well).

Initially only a few of these unissued notes appeared, but larger quantities started showing up around 2006. While this has suppressed the price of the notes on the market, the notes are not cheap, with an Uncirculated note carrying a catalog value of approximately $400. Unlike other stolen numismatic items, the German Central Bank has not demanded the notes back, although their legal ownership can be questioned. The notes are a very interesting and historical reminder of the Cold War.